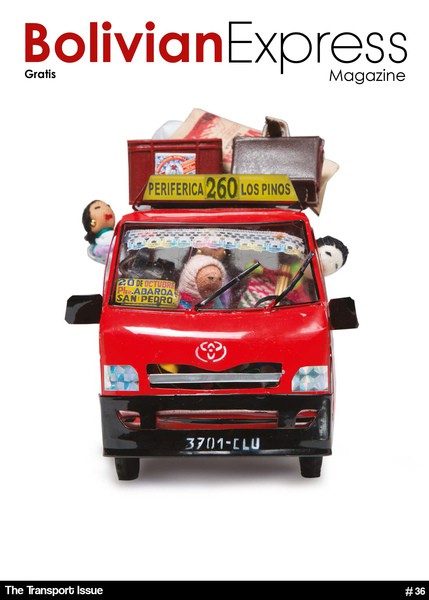 It would be possible to connect forty thousand hamlets […] with a spider web of six-foot-wide trails […] providing the country with 200,000 three-wheeled mechanical donkeys – five on the average for each hamlet […] A ‘donkey’ could make 15 mph, and carry loads of 850 pounds (from Deschooling Society)

It was 1971 and Ivan Illich had spent over a decade and a half in Latin America. This was his utopian vision for a transportation system which was at once practical and built for a society like ours. At its heart was the idea that the six-horsepower engines that powered these ‘mechanical donkeys’ could also be used as a plough and pump, and designed in such a way that anyone could learn to repair them.

Fast forward four decades and look around La Paz. While there are no mechanical donkeys in sight, the system we have in its place is just as outlandish—and sometimes almost as visionary. The country is home to an estimated 1.2 million vehicles, of which over 300 thousand can be found in La Paz alone, a figure that has risen 90% in the past fifteen years. Bridges and roads are constantly being built but the traffic seems to grow at twice the rate.

Heads peer out of the windows of minibuses shouting destinations; young men and women dressed as zebras teach people to cross the road; cholitas wearing Robocop-style helmets enforce traffic routes to prevent trameaje; a 50-year-old blue bus known as ‘El Inmortal’ continues to grumble in circulation. A steel spider web is also being spun up above: the teleférico has arrived, and dangling cabins henceforth associated with Swiss ski resorts will soon be part of the world’s largest network of urban transit cable cars.

This superorganism is evolving beyond the infrastructure. With the gradual disappearance of the voceador comes the rise of a new character known as el datero who, in exchange for some coins, tips off public transport drivers allowing them to better plan their routes: ‘the 230 just passed, followed by an empty 355’. Local minibuses have invariably been adapted to fit an extra row of seats (the move is consistent with the anatomy of most locals, but remains a practical joke on anyone taller than 5’9’’—ie most tourists). And roaming alongside 1967 Land Cruisers are living-room-sized-2013 Hummers, unviably huge compared to the narrow streets of the city centre. It’s retro-futuristic, anarcho-anachronistic, organised chaos in all its glory.

Whether or not you are aware of it, you are also part of this superorganism. The moment you set foot out of your house you are plunged into a whirling world of pedestrians, vehicles, smog and chatter. E pluribus unum: ‘one out of many’; each element seemingly follows a logic of its own, yet somehow it all comes together as a single whole on the busy arteries of La Paz. Missed connections, chance encounters, transport strikes, and the daily honking war are all part of this choreography.

As if caught in a trancadera, these musings are (appropriately) going nowhere. We invite you to stay put, hop on the Bolivian Express and start flicking the pages. We’ll help you get to nowhere twice as fast.