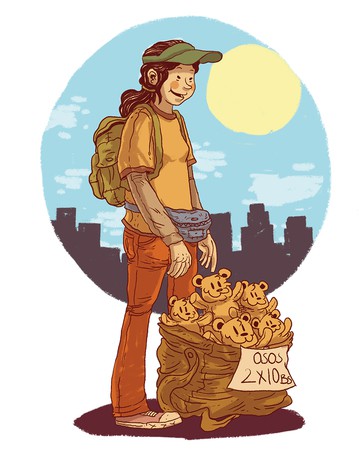 Between light and shadow...

Sarita lives in Santa Cruz with her boyfriend. She gets up every morning to begin work at 6 am at a supermarket and works until 2 in the afternoon. She returns home to do housework and homework. Sometimes she falls asleep, but when she doesn’t she goes to night school from 7 to 10 pm. She just turned 14 years old.

Work began for Sarita when she was 12 and worked as a nanny, and now she tells her story as if it all happened a long time ago. ‘My father never wanted me to work. He said, “It doesn’t matter that we have so little, we will be fine.” But the money was not enough. My two older sisters and I left school so that my siblings could study.’ And that’s how this young adult made the decision to go to work.

In many parts of the world, teenagers look for part-time work to have spending money or because they want to become more independent from their families. But Sarita, whose story is like that of many other teens in Bolivia, left her home in Guarayos to work full-time.

‘At first I was scared, but the family was good to me’, Sarita says. ‘The hardest part was being far away from my family. Sometimes I would go to my room, look at pictures of my parents, brothers and sisters and cry.’

Today Sarita wants to finish school and then study medicine. She is independent, and she visits her family every two or three months bearing gifts.

‘I think that young people should help their families more’, Sarita says. ‘When you start to work you really learn to value the sacrifices your parents make for you. For me it has not been easy, but I know that I am more independent now and that I can better myself.’

‘Girls are more vulnerable than boys’, says Lidia Mayser, the manager of an anti-child-labour program of the government of Santa Cruz. So why are girls more vulnerable to exploitation? ‘It doesn’t matter that they have to work—be it selling candy, cards, flowers or anything—when they get home they are also expected to do housework’, says Armando Oviedo, manager of Plan International in Santa Cruz. He explains that in rural areas, if there is a choice to make about which children will attend school, the boy is usually chosen because girls are expected to care for their younger siblings.

Bolivia’s Law 548, which was passed in July of this year, allows children as young as 10 to work independently, and children as young as 12 to work for managers, as long as they have written permission from their parents and the local children’s rights office. But in reality, children and teenagers have long worked, and continue to do so, without these permissions.

Across the country from Santa Cruz in the city of El Alto, Pedro, 16, works with his mother. ‘My father died when I was 11 years old and my three siblings and I help my mom sell food. I help most because I am the oldest’, he says. Pedro’s day starts at 7 am, when he helps his siblings, who are 10, 7 and 5, get ready for school. Then he helps his mother prepare pots, plates and silverware and takes them to the center of La Paz, where they sell food near the Plaza Murillo. After the lunch rush, he eats something quickly so he can be at school by 1:30 in the afternoon. ‘I have to bring all my things with me from the house’, he says with a knowing smile. ‘Sometimes I forget my work and the teachers reprimand me. They don’t understand.’

Pedro leaves school at 6:30pm, arrives home around 7:30 or 8, does his homework or sleeps a little, and then at 10 or 11 at night he helps his mother prepare food for the following day. ‘I help her peel potatoes, carrots, make rice or noodles, wash things—anything, it depends on the food. We prepare just two different dishes.’

Pedro wants to do all the things young people his age do, like study, go out with friends, and meet girls—but time for that teenage life is limited. At the same time, he carries heavy responsibilities for someone who is still a teenager. He knows his life is not easy but he doesn’t complain—his mother and his siblings count on him to contribute to the family’s survival.