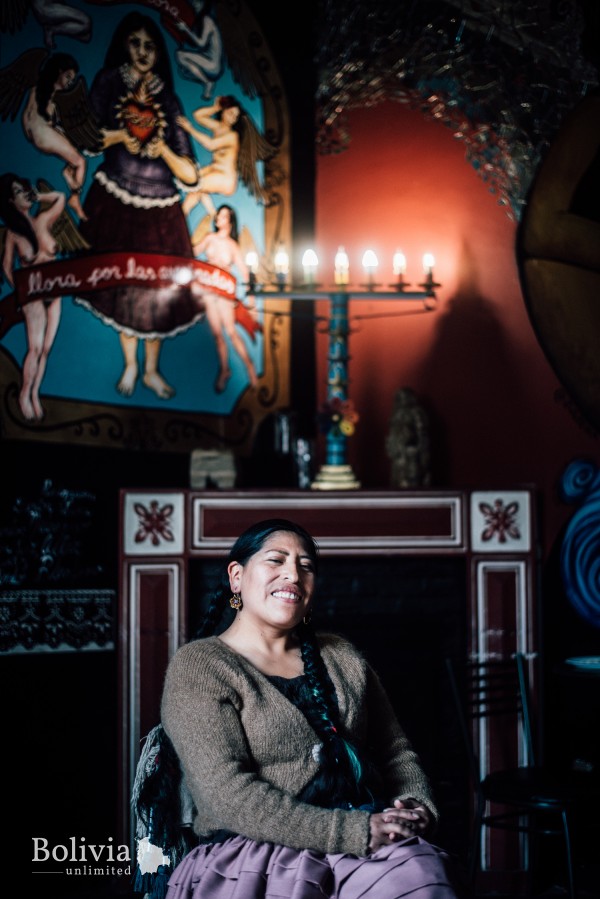 Breaking a common stereotype on the local radio

Yola Mamani was born and raised in a community called Santa María Grande, situated in the Omasuyos Province of the Department of La Paz. When she was only nine years old she moved by herself to La Paz because her father wanted her to discover life outside of the community. Imagine a nine year-old girl moving on her own to the city to learn about life. What life decided for her was that her first job will be as a babysitter, and then she would work as a kitchen assistant, only to end up as a trabajadora del hogar multiple – literally a ‘multi-household worker’ – which was not an end, but a beginning for her.

In fact, her role as a household worker would be the subject of the first radio show she hosted, named Trabajadores del hogar, con orgullo y dignidad (or Multi-household workers with pride and dignity). Life on the job has taught her these women had no rights because they were not recognised as workers, which is enough to imagine their working conditions. In this context, before becoming an anchorwoman on the radio, she became the head of one of the four labour unions of trabajadores del hogar. In 2003, a law was passed in Bolivia that gave legal rights to these workers.

Three years later, in 2006, her show was aired for the first time. Back then, she was still active as a household worker and, along with a few colleagues, she wanted to tell the public about the trabajadores del hogar and what they do for a living. There was virtually no information about them available to the public until her show went live. No one knew who these workers were. They were practically shadows.

Mamani found an home for her show at Radio Deseo, the broadcasting station of a local organisation called, Mujeres Creando. They began to collaborate with 25 women who worked part-time in household service, none of whom had studies related to the media. Thus, they had to learn how to compose a script, how to edit an audio recording, how to conduct an investigation and do a social analysis, how to use a computer, etc. The main idea of the show was for them to speak in the first person, in terms of ‘I’ and ‘we’, and appear real to the people. It was almost as if they said: Yes, it’s true. These trabajadores del hogar can speak, think and analyse.

Then came a time where they weren’t workers anymore and could no longer speak in the first person about their work. They tried to train other radio hosts, but their efforts were fruitless. So the show ended there, but Mamani did not give up radio. She currently hosts another show called Warmin yatiyawinakawa (The women’s news bulletin) also in Radio Deseo. This is an ‘information laboratory,’ she says, in which they question themselves about women, politics, the economy and other subjects.

Mamani speaks in her role as a cholita, underlining how deeply entrenched the cholita stereotype is in the Bolivian public. For some people, the cholita will always be the maid, the cleaner, an uneducated woman who doesn’t know about politics, economics, or relevant social issues.

At a local book festival, vendors approached Mamani to recommend recipe books and cooking books, even though she wanted to learn about politics. When she used to live with a friend who was blonde and caucasian, their neighbours assumed Mamani was the cleaning lady. Despite these experiences, Mamani explains that this who she is, she does not have a complex about being a cholita. She dresses as a cholita because it is part of who she is, not because it is a costume, or her job to dress that way. And yet the stigmatisation of the cholitas doesn’t come from Bolivians alone. It is also present in how foreigners view them.

The only cholitas you tend to see in the media are cholitas who represent Bolivian folklore. ‘Cholitas are not allowed speak,’ Mamani says, to illustrate her point. They are exotic, a kind of tourist attraction. In her current radio show, Mamani tries to explain that cholitas are not only the women who sell things on the streets. But this will likely remain a difficult cause, as long as she is the only cholita covering cultural and political issues in the media.