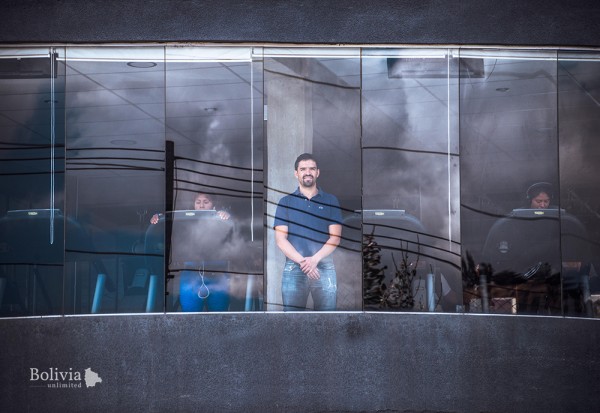 I am meeting with Xavier Iturralde, founder of the Spazio Wellness and Lounge gymnasiums. The first thing he tells me is: ‘I am paceño. I love my city.’ His love and commitment to La Paz has been passed down to him generation after generation by a long line of dedicated paceños. More than a successful entrepreneur, he is a man with a vision and a mission for his city and country. Now Iturralde is working on a new urban landscape for La Paz, no less.

Back in 2002, Iturralde started as a fitness instructor. Twelve years later he opened his first Spazio Wellness and Lounge gymnasium in Calacoto. Two more followed, one in Sopocachi and another in El Alto. A fourth one will open soon in Cochabamba. But this is just a starting point for Iturralde’s ambitions. The dedication and passion that took him to where he is now led him to start Fundación Kalasasaya. The foundation’s mission is to revitalise the city of La Paz, to reconceptualise the city and create spaces and axes that will allow it to grow organically and rapidly.

As a boy, Xavier Iturralde dreamt of infrastructures, of a city that keeps growing, that reflects its inhabitants’ spirits

As a boy, Iturralde dreamt of infrastructures, of a city that keeps growing, that reflects its inhabitants’ spirits – a dream that is now becoming reality. ‘Since 1910–25, La Paz has been using the same urban area,’ Iturralde tells me. ‘The city hasn’t been taken care of.’ And there is space for La Paz to grow. Iturralde sees a potential for La Paz to expand in a way that is hard to imagine when you experience the trancaderas and everyday congestions. But it’s with confidence that he tells me that ‘in 20 years there could be eight million inhabitants in La Paz.’ With now under two million inhabitants in La Paz and El Alto combined, that’s a bold statement, but after Iturralde explains more details about his project and the idea behind it, it makes sense.

This October, Fundación Kalasasaya will unveil its new metropolitan centre project. This means a new city centre, a new area that will dynamise neighbourhoods and allow the city’s growth. There is also a project for a metropolitan avenue with six lanes that will extend through the city and into a new industrial park. Iturralde emphasises the use of the word ‘metropolitan’ because this project is about the city itself. Part of the impetus for this mega-project is his belief that important aspects of the city’s development have been abandoned since the 1960s. ‘The focus of the development [in the past] has been social, but there needs to be a balance between the social and the economic [elements],’ Iturralde explains.

And Iturralde has even more projects on the horizon that also aim to reconfigure the urban landscape. One project strives to turn the city greener by planting small plants along the city’s many riverbanks. Another is to work with the famed Bolivian artist Roberto Mamani Mamani to create a urban gallery by painting hundreds of building façades. The city’s roads can also be reengineered with bicycle lanes placed in specific places to coordinate with other transport systems while integrating green axes. Iturralde is also working on setting up recycling plants to create a market of products to export to Chile and Peru.

Because the foundation is working with the support of the federal and municipal government and foreign concerns, Iturralde’s vision might come to fruition in the next few years – at least partially. The ideas and motivations behind these projects are certainly ambitious, but they are in response to an even larger need. Talking with Iturralde, the picture he paints is an integral one. ‘La Paz is supporting the whole economy of the altiplano, and investing in La Paz is investing in the whole region,’ he tells me. Politically, he believes, it’s also an asset. The more developed La Paz and the surrounding region are, the more pressure and weight there are to claim access to the sea, for instance. ‘The other countries in South America centralise all their power in one city, but Bolivia has the possibility to have two major poles of development. That’s a very powerful prospect.’

‘Paceños are warriors. They built and made the city thrive’

For Bolivia, having La Paz and Santa Cruz pull the country forward could forge an economic and political balance. But for all of this to happen, La Paz needs to grow. ‘The city needs new spaces, a new airport, new people,’ Iturralde says. As a paceño, he feels that the people have forgotten who they were, who they are. ‘Paceños are warriors. They built and made the city thrive,’ Iturralde tells me. ‘La Paz is a lion that has fallen asleep.’ For the city to awake, Iturralde asserts, it needs new leadership, which is only possible by making the area more attractive so that La Paz can attract new people. A visionary and a leader himself, Iturralde is propelling the changes he wants to see happen and setting the stage for the La Paz he has been dreaming about.