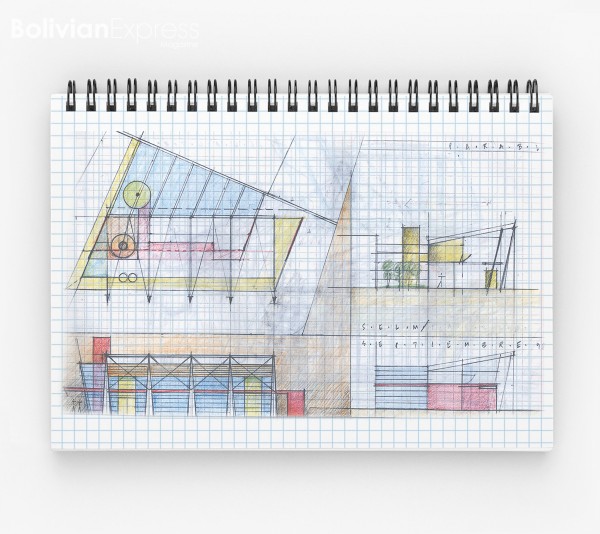 The Mosaic of Modernity and Traditionalism in Paceño Architecture

‘The city eats you up. It eats you, it chews you, it digests you and it defecates you.’
– Carlos Villagómez Paredes

La Paz is a chaotic sprawl, a wild mix of architectonic shapes and forms that take over even the most inhospitable stretches of land. Walking the city feels like exercise: while freezing in the shade, one is very likely to open one’s jacket and swear at the many layers of clothes once hiking uphill. To round it all off, the teleférico’s cable cars float quietly above, connecting its residents in a futuristic way, transforming a simple commute into an exciting amusement park ride.

Carlos Villagómez Paredes, a renowned architect in La Paz who is a graduate of the city’s University of San Andrés, with advanced degrees from Mexico City’s UNAM and the Free University of Brussels in Belgium, sees a second important dimension to La Paz’s peculiar appearance apart from its geographical location: its ethnic and social configuration. No other city can boast the rich share of indigenous population found here. Indeed, the indigenous culture and traditions are undoubtedly a major tourist attraction for all of Bolivia.

Villagómez, who teaches at the University of San Andrés and designed additions to the Ethnographic and Folklore Museum in La Paz and the Folklore Museum in El Alto, amongst many other projects, considers the social configuration an integral part of his work and calls for more sensitivity amongst his colleagues for the variety of cultural expressions that were established by the recognition of the plurinational and pluricultural state of Bolivia. An architect’s challenge in La Paz, therefore, is the cultural mosaic constructed in a cratered city deemed by many to be unsuitable for human settlement. ‘It’s a very special city. It is madness to be an architect in this city!’ Villagómez exclaims.

According to Villagómez, the city’s diversity, in all its forms and shapes, does not allow for one single architectural style to dominate the urban landscape; that would disregard and obliterate the many groups not culturally represented by that particular style. To understand the people as an architect is to respect and embrace their diversity. ‘It is not enough to simply be an architect in this city; one has to be a cultural leader, one has to be a cultural activist, an intellectual leader to be an architect in this city,’ he says. A cultural responsibility, therefore, stems from the profession; Villagómez has accepted a responsibility to represent all the disparate elements of the city with dignity and respect.

In many of his works, Villagómez has embraced and mastered the ‘Western’ style of clear and geometric lines, forms and shapes that add an elegant touch to the timeless white that dominates some of his houses, whether that is to satisfy a customer or to broaden his own horizon. Large windows, oriented to face the most spectacular views, give off warm light on the outside and allow a sneak peak into majestic yet minimalistic interiors and elegantly curved staircases.

Indeed, Villagómez does not think La Paz is one of the seven most wondrous cities of the world because of its beauty. The city presents a challenge to any architect, as its intensity, in the words of Villagómez, ‘eats up any kind of intention... The city eats you up. It eats you, it chews you, it digests you and it defecates you in a way where it does not give you the option of saying, “I am an architect of this city.”’

Despite a changing appearance, mostly due to new high-rise buildings and the emergence of modern, minimalistic, Western-looking buildings and houses in Zona Sur, the cityscape is still dominated by half-finished brick houses with their steel rods eerily pointing upwards, little signs of urban planning, dusty streets filled with car emissions, stray dogs and simple street vendors. If one is not convinced from the mere sight of it, it is the city’s day-to-day life that marches to a different beat, that paints an unusual picture, and that instills a peculiar feeling in the visitor, which cannot only be blamed on altitude sickness.

‘Ciudad Maravillosa’, according to Villagómez, does not mean beautiful; in his own words, it means ‘extraordinary, unusual, daring, strange... very strange.’