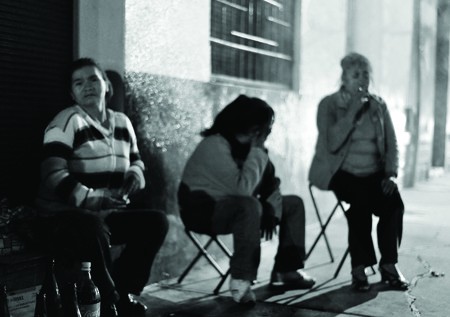 The soft red lights cast shadows on her supple body as she moves with the music. Her body melts into the pole, and every step she takes brings a cheer from the crowd. Her naked breasts bounce to cheesy pop music, and here I am, a journalist intern lost amongst this crowd of drunken businessmen and tourists, looking, slowly nursing my drink, a first-time visitor to one of La Paz’s best and most well-known strip clubs.

I look around at the regulars, each one mesmerised by the woman onstage, each one thinking she is dancing just for him and hoping for a cheap fuck at the end of the night. I watch as men in suits escort the girls through the crowd and backstage, while scantily clad women aged mostly between 18 and 25 persuade men to buy them drinks from the bar. One of the drunks near the stage is surrounded by women; he falls over and slowly stumbles back to his feet, then buys himself and the girls another round of drinks. I start speaking to a tourist sitting at the end of the bar. He slurs drunkenly, ‘Every time one of the girl gets someone to buy a drink for her she is given a bangle by the bartender. The more bangles she has on her arm at the end of the night the more money she gets.’ It’s not long before one of these girls is sitting on my lap, rubbing my chest and asking me to buy her a drink. My attempts to get to know her prove futile when every question I ask her is batted away with a smile, a shrug and a whisper. ‘Where are you from? ‘What’s your name?’ I ask. ‘It’s a secret’, she says. She walks away, looks back, breaks into a kind of half smile, and then sits on the next guy’s lap. Later on, the same girl asks me to spend a few hours with her in a small room upstairs. ‘I’ll give you a good price’, she says. I politely refuse.

A Bolivian I meet offers tales of his experiences in the strip club. ‘The men go because they are lonely, they are looking for company, and they try to numb themselves from whatever emotional hurt they are going through.’ He tells me how he visited a strip club after his heart was broken and he was looking for a distraction. Most of the girls in these expensive Bolivian clubs are from Colombia, Brazil and, above all, Paraguay. ‘One of these beautiful Paraguayan girls was looking really uncomfortable around the guy she was sitting with. She kept watching me. A few minutes later a waiter came up and told me this girl really wants to be with me, she wants to talk in private.’ He explains how the girls will sometimes choose the most decent-looking guy, or the guy who looks like he has the most money, and ask him to spend the night with her. ‘She was so young and beautiful. I found it a bit weird that at 19 she already had a boob job. I remember asking her why she worked in the strip club.’ He begins to fidget as he continues with his story. ‘She told me she didn’t have any other choice. She never knew her mum, and her dad was injured in a work accident and couldn’t work anymore. The compensation from the government in Paraguay is not enough to really live on, and she couldn’t get work apart from selling her body at the club.’ He looks at the ceiling and a soft sigh escapes his lips. ‘She looked so sad and said, “We should just drown our sorrows.” So, I bought a bottle of tequila for 500 bolivianos and all we did the entire night was drink and dance. I kissed her like she was my girlfriend and not just some girl I met in the strip club. She gave me her number before I left the club.’ He tells me about the house where the women live, how there are about 25 beds where they sleep. ‘It was so strange going to go pick her up for a date. All the women came to the door. They looked like they hadn’t slept in days, and they stood at the door shouting, threatening me and saying I’d better look after girl. She spent the entire date trying to get drunk, and I realised that she probably just wanted money from me and all I was looking for was some company.’

The sordid, drunken darkness of the club often masks the emotional unbalance of the men who frequent it, and the women who work it. The dim lights and lithe bodies are a fantasy beauty, for beyond them lies the swept stage and glimmering pole, equally empty, equally lonely.