Women at the Wheels 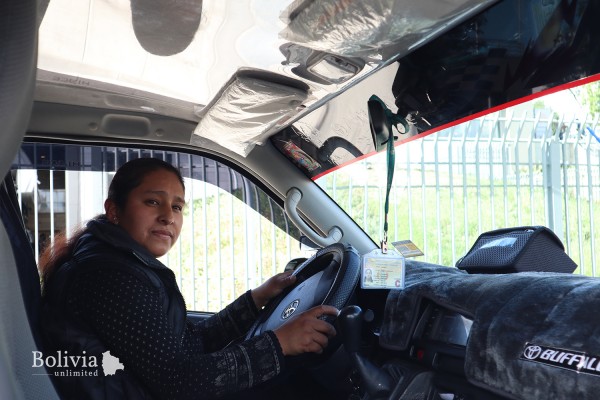 If you live in La Paz, or are even just visiting, you will most likely take a minibus at some point. There are also micros (the large blue or yellow buses), trufis (taxis with a fixed route), PumaKataris (modern buses with fixed stops) and of course the cable-car system, Mi Teleférico. However, the minibus – actually a minivan – remains the most commonly used form of public transport in the city, as it covers the most frequented routes and allows its passengers to hop on and off whenever they want. It is also the cheapest mode of transport.

Every driver (and their minibus) is associated with a transportation syndicate that strictly regulate routes and represent the drivers. Minibus drivers tend to be men, of the 3,000 members in the Señor de Mayo syndicate, only five are women. We recently spoke to one of the syndicate’s female drivers, Maribel Cuevas, who has been a member of the Señor de Mayo syndicate for 11 years and was the first woman to join.

‘We need more women,’ Cuevas says. ‘Women are more attentive and patient while driving.’ Surprisingly, she says that it isn’t more difficult for women to work as minibuses drivers, as she didn’t feel like she had to prove herself more than her male colleagues.

People feel more secure when they jump into the minibus and see a woman behind the wheel.

So why aren’t there more female minibus drivers? Is it a dangerous job for women? Cuevas doesn’t think so, even when driving at night. ‘There are around 14 passengers with me,’ she says. ‘I think it is more dangerous for taxi drivers, because they are alone with the passengers.’ Moreover, she says that people feel more secure when they jump into the minibus and see a woman behind the wheel.

Perhaps there are so few women drivers because, in a society like Bolivia’s where gender roles are fairly inflexible, it’s just not practical. Cuevas works from four in the morning till seven at night. ‘It is not an easy profession,’ she says. ‘You abandon your family.’ Cuevas’s children are in middle school, and it’s her mother who takes care of them. But, she adds, sometimes the job gives her more freedom, because ‘you can go and come back from work any time of the day.’

‘I don’t have any regrets choosing to be a driver. I want to drive a bigger bus now.’

Even if being a minibuses driver is not especially dangerous for women, and even if the job allows for more flexibility to manage one’s schedule, it is still a dominated by men – but this may change as long as women like Cuevas lead the way and show that it is possible. And Cuevas loves her job: ‘I don’t have any regrets choosing to be a driver,’ she says. ‘I want to drive a bigger bus now.’