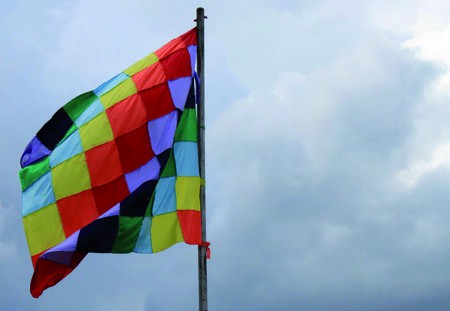 In its Constitution, Bolivia is described as a plurinational state. This is an apt description seeing as it does, after all, encompass a wide variety of cultures, peoples and tribes: from the indigenous descendants of the original inhabitants of the territory such as the Incas, to criollo descendants of the Spanish colonizers (not to forget the increasingly ubiquitous gringos). Since Evo Morales' rise to power, he has juggled champining the interests of the indigenous peoples while attempting to unite a nationally fragmented Bolivia. Notably, he has enshrined the Wiphala as an official second national flag in the Constitution. Far from uniting the indigenous people of the plurination under a (literal) tapestry of colour representing each nation, this move has been the focus of widespread controversy. There is no doubt that for a large number of Bolivia's indigenous peoples today, the Wiphala constitutes a vivid symbol unmistakeably associated with the campaign for greater equality and the recuperation of identity which rose Evo Morales to the presidency, and which the MAS has continued to associate itself with during his time in office.

But where does the Wiphala come from? Is it, as many followers would assert, a rescued artefact dating from the Incan era, or is there more to the flag's elusive origins than first meets the eye? The government, backed up by historians such as Fernando Huanacuni claim that the Wiphala is a rescued relic, much like the Andean Cross or Chacana, which they substantiate with evidence such as ancient Wiphala fragments found on pre-Columbian ceramic vases of the Tiwanacota culture. Supporters of this theory cite the fact that during the Spanish invasion and occupation of Cuzco in 1534, Spanish chroniclers documented a multitude of objects similar to the modern day Wiphala, using the seven colours of the rainbow and which shows that the iconography of the arco-iris was an integral part of Incan symbology.

However, the Wiphala has also faced much criticism regarding not only its origins but also its political role within the indigenous movement. Firstly, the idea of the bandera or flag as a national icon is typically understood to be a European phenomenon. Furthermore, although there is scant evidence of a rainbow flag in Incan records, there is in fact evidence of its appearance in Spanish iconography from the same era: pictures of two angels bearing a standard that is suspiciously similar to the Wiphala.

The second (and perhaps less frivolous) controversy is that there are many who feel that the Wiphala, meant to represent all the indigenous peoples of Bolivia, falls somewhat short of this goal. The Wiphala, it is said, is a predominantly Aymara symbol – even an Andean one at a stretch- and other indigenous groups do not always feel included in its tapestry. Nations from the culturally and ethnically distinct Amazon regions of the country, such as the Guarayos and Moxeños, share little history with the aforementioned groups. Given this limitation, and the fact that for the non-indigenous population the Wiphala is not connected to their history, the pressing question remains: should it really be a nationally recognised flag?

This question is not easily answered; for the majority of people a flag or national symbol is a political artifact whose importance lies in the emotional connection between it and the people. When it is found to be misplaced or incomplete, it can have the opposite effect of fragmenting the imagined community or communities which underwrites the state. This was reflected in the comment made by the ex-President and historian Carlos Mesa, who said to BBC Mundo that "the Wiphala represents only part of the country, it stands for the Andean indigenous world which is predominantly Aymara, though also Quechua. It isn't an expression which denotes the totality of the Bolivian population".

In Santa Cruz and more generally the East of Bolivia this feeling has been manifested in a reluctance to raise the Wiphala on official occasions. The reluctance is certainly demonstrative of the Wiphala's failure to relevant on a national scale, but there is also the question of oppositional politics. The Governor of Santa Cruz is a prominent member of the government's opposition and so it is worth considering the possibility that his party's hostility toward the Wiphala is simply a reflection of their hostility towards Evo's government in general.

Nevertheless, the Wiphala's symbolic and political importance is hard to overstate. Since its birth (or resurrection, depending upon your viewpoint), the Wiphala's resonances have been powerful and widespread. As a political symbol in the campaign for indigenous rights it has represented the recuperation of the indigenous peoples' identities and dignity against a society that was previously stuck in a neo-colonial rut of racial inequality. Its official recognition in the Constitution, (refer to Article 6), only went further to reinforce the fact that Bolivia's politicians and state apparatus were no longer capable of oppressing its native populations.

Whether you choose to believe that the Wiphala is an ancient symbol or a political people its presence is undeniable. It is an emotive, highly aesthetically pleasing symbol; political for most and historical for many, but most importantly, it is here to stay.