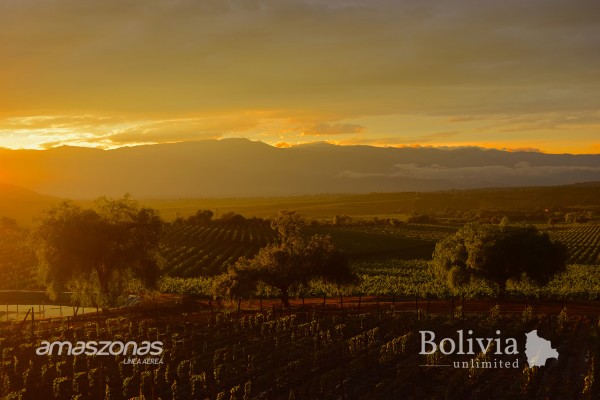 Bolivian viniculture at the heart of Tarijan industry

Eduardo Caceres, winemaker for the boutique Bolivian winery Cruce Del Zorro, recalls a business trip to Europe. After the inevitable mention of Argentina, Chile and Brazil when discussing South American wines, a reference to Bolivia prompted the response: ‘Where is that?’ International awareness of Bolivia in general is limited, let alone knowledge of the wines that are produced here. But things are starting to change. In the past couple of years, media such as The Washington Post, The New York Times and, most recently, NPR have published articles about Bolivian wines. Why are people starting to pay attention?

Winemaking in Bolivia is approximately 500 years old. When the Spanish conquistadors arrived on the shores of the Americas, their cargo included a variety of dried grapes picked from the vineyards of their home country. Due to the role wine plays in Catholic ceremonies, wherever the Spaniards went, they tried to grow vines. These grapes arrived in Bolivia from the west, through Peru, and the south, through Argentina. At first glance, Bolivia’s landscapes might not seem friendly to European grapevines. The rocky, snow capped peaks of the Andes in the west and the hot, humid rainforests of the Amazon in the east hardly provide the temperate climate that grapes need to thrive. However, the Spaniards had success in certain valleys that act as bridges between the two drastically different terrains. Despite the entire country being at a tropical latitude, these high-altitude valleys provide the more temperate climate the vines require. 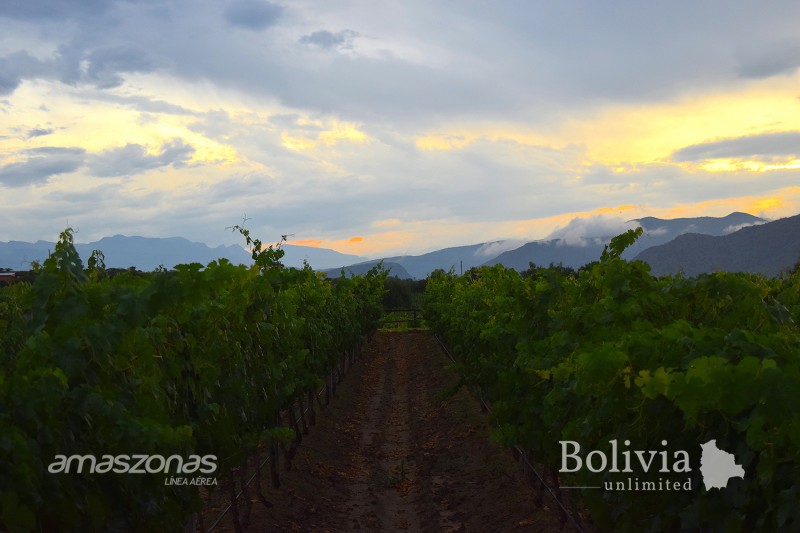 Sunset at the vineyards of Aranjuez

Throughout the years, table wines in Bolivia were produced from blends of the grapes the Spanish colonists initially brought with them, like negra criolla. Muscat of Alexandria, a white grape, was, and still is, used almost entirely for the production of Bolivia’s national spirit: singani. Then, in the 1960s, wineries in the Central Valley of Tarija began investing in modern technology imported from Argentina, which ushered in a new era of winemaking in Bolivia. There was a shift towards dry, clean, high-quality wines. French grape varieties were planted, although initially not much thought was given to whether they would be suitable to the Bolivian climate. As the expertise and experience of the workers at the wineries grew, more attention was paid to the grapes which were better suited to the high-altitude growing environment. Tarija has now become the home of wine in Bolivia, producing an estimated 97 percent of all Bolivian wine.

The Central Valley of Tarija has vineyards at altitudes ranging from 1,800 to 2,200 metres above sea level. At these high altitudes, there is less atmosphere to absorb the ultraviolet rays from the sun, which forces grapes to grow a thicker skin to protect their seeds. This makes the wines produced there rich in ripe tannins. In a 24-hour period during the growing season, temperatures can range from 12 to 33 degrees Celsius. Cold nights promote acidity in the grapes, while the warm days raise their sugar content – which is key to their eventual fermentation and transformation into wine. According Darren Armstrong, a wine sommelier and naturalised Bolivian citizen, saurazos – cold polar winds carried up to Tarija through Patagonia – have a particular effect on grapes grown in Bolivia. ‘These winds help create a close match to the typical four seasons that Vitis Vinifera vines prefer,’ he wrote in a blog post, ‘causing winter temperatures to reach the chilling range of 32-45°F for long enough to allow the vines to rest in dormancy.’ This causes the vines to produce one crop a year with an intensity of flavour and appropriate yield. Liz Aranicibia, the owner and head of Bodega Magnus, says these factors result in wines that have ‘a lot of everything’, like colour, acidity, alcohol, aroma and flavour. 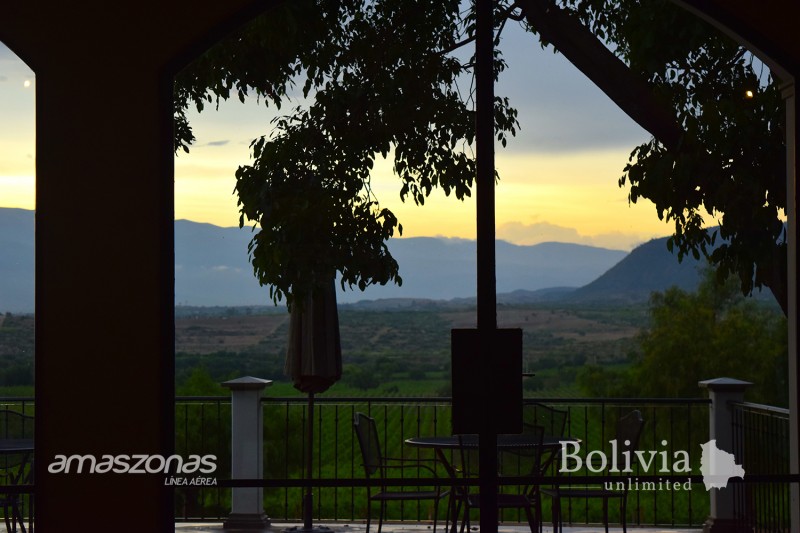 The few of the vineyards from Aranjuez’s ‘Finca El Origin’. Trying to capitalise on enotourism, the company offers
comprehensive tours of its winery and vineyards, accompanied by a tasting at the end.

In 1999, the Tarijan winery Aranjuez planted the first tannat vines in Bolivia. This little-known grape originally hails from the Gascony region in southwestern France and does remarkably well in the high-altitude Bolivian terroir. It has thick skin and is high in tannins, producing inky, rich wines. Because of the high altitude, the skins grow even thicker and make the wine full of dark fruit flavour and aroma. In 2013, Bodega Aranjuez was the first Bolivian winery to win a Great Gold Medal at an international wine competition, with its 100 percent tannat Juan Cruz Gran Reserva. ‘From this achievement, we have positioned the tannat varietal as the emblem of Bolivia,’ Gerardo Aguirre, the export manager and head of enotourism for Bodega Aranjuez, said. Indeed, Bodega Aranjuez has won four Great Gold medals for its tannat wines in the past six years.

Another winery based in Tarija turning heads is Bodegas y Viñedos Kuhlmann, which produces Altosama, the world’s first high-altitude sparkling wine. It’s named after the nearby Sama mountain range, which provides Tarija’s Central Valley with a rainy environment during the summer months. ‘In honor of Sama, our range of sparkling wines are called Altosama,’ explains Franz Molina, the production manager at Bodegas Kuhlmann. This year, Kuhlmann’s Altosama Espumante de Altura Brut was named one of the ‘50 Great Sparkling Wines of the World’ by the Wine Pleasures website. Kuhlmann also claims to be the only Bolivian vineyard producing wine from the Marselan grape. In 2006, Molina planted several experimental grape varieties at the Kuhlmann vineyards in Tarija, but was most intrigued by the Marselan. In the extreme climate, the vines dropped most of the fruits, but those that were retained were extremely hardy and produced an intense flavour. Now, more than 10 years later, after much experimentation and hard work, Kuhlmann released its unique Gran Patrono, made from 100 percent Marselan grapes. It has received a lot of attention, with Decanter magazine describing it as ‘mysterious.’

While the larger wineries strive for consistency year after year, boutique wineries like Bodega Magnus set their sights on producing unique vintages. ‘Each year is distinct, and therefore the result of the harvest is too, making each vintage unique’ Liz Arancibia, Bodega Magnus’s owner, says. The winery prides itself on being natural, she says, allowing the wine to age without human interference. ‘[This is] our great secret,’ says Arancibia. Another boutique winery, Cruce Del Zorro, has forged a special relationship with its grape growers through its ‘Tocando el Cielo’ (Touching the Sky) programme. Inspired by the successful coffee enterprises in Bolivia’s south, the programme aims to help ‘the local producers prosper, obtain sustainable profits, and learn valuable financial and agronomic skills.’ To aid local producers, Cruce del Zorro contracted specialists from Argentina and Costa Rica to act as consultants. ‘The bodega revolves around the small producers, who are our artists,’ said Luis Moreno, Cruce del Zorro’s owner and director. The winery produces two different lines of wine each year, La Curiosa, a single varietal, and its namesake Cruce del Zorro blend. Each year the grapes used to produce the wines change depending on the harvest. 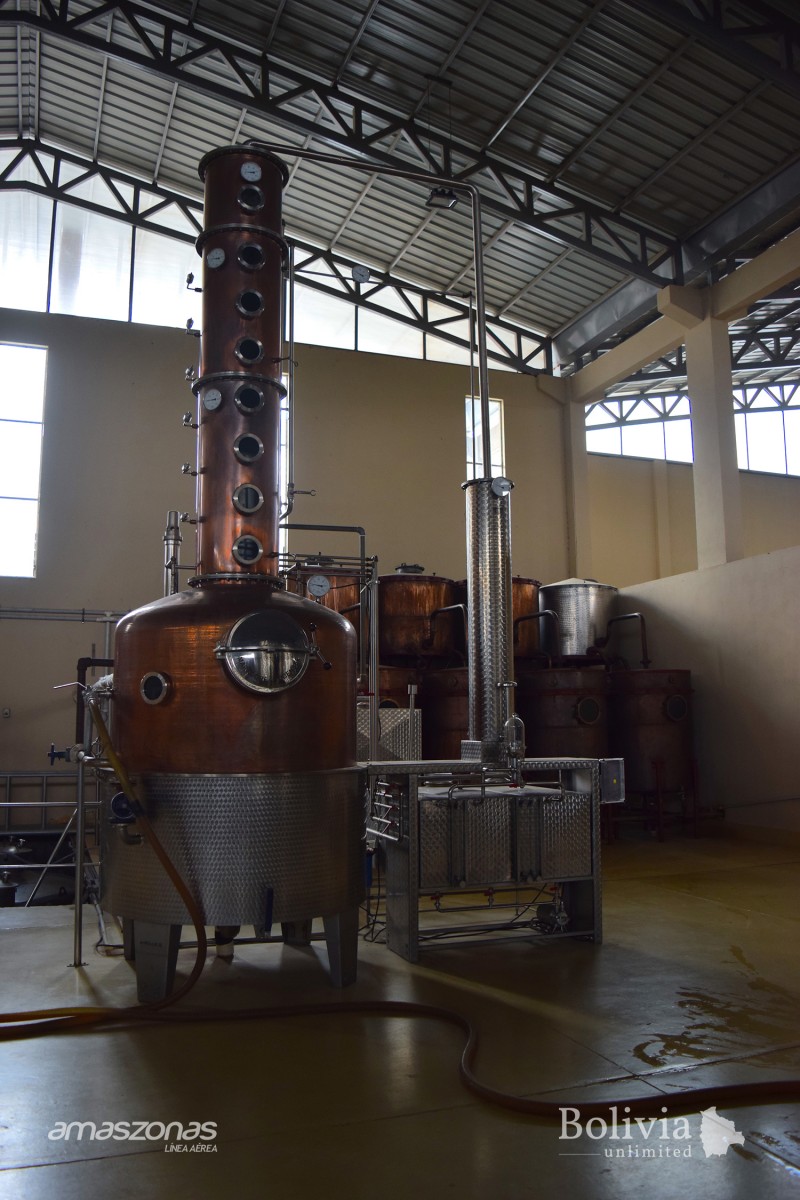 When you are drinking wine, you are not only tasting the grape variety, you are also tasting the terroir. This term describes the environment in which grapes are grown, including things like the climate, soil and terrain. In fact, a common complaint nowadays is that all wines taste the same, with New World wineries mimicking Old World wineries – for example, by ageing their wines in oak barrels for long periods. But this cannot be said for Bolivian wines. With such a unique, high-altitude terroir, winemakers are keen to simply allow their wines to tell you where they come from – by their taste alone. ‘We tend to make wines with a lot of fruity character, using oak barrels in such a way that the protagonist is always the wine,’ Gerardo Aguirre of Aranjuez says. ‘Being 100 percent wines of altitude, Bolivian wines are truly unique,’ Kuhlmann’s Molina says. And this is something the wineries are trying to capitalise on.

Bolivia will never be able to compete with the likes of Argentina and Chile in the volume of wine it produces due to limited amount of suitable land. Currently there are about 4,000 hectares of vines in Bolivia. And in the next 10 to 15 years, according to Molina, it could grow to 10,000 hectares. Argentina, by contrast, cultivates around 220,000 hectares of vines. Bolivia’s strategy instead is to produce wines of quality. As evidenced by the plethora of international awards won by its wineries, ‘[Bolivia] has already demonstrated that it has wines of equal or better quality’ to its South American neighbours, says Molina. This international recognition has led many Bolivian wineries to start exporting to places like the United States, Europe and China. On top of this, they are looking at enotourism as a means of spreading awareness of Bolivian wines and improving the sector’s economic standing.

The Bolivian National Wine Makers Association recently conducted a study that found for every 25 acres of land used to grow grapevines in Tarija, 10 people are lifted out of poverty. And in 2016 wine production rose 44 percent in Tarija, bringing more than US$20 million into that sector. ‘We are the most important industry in the south of Bolivia after hydrocarbons,’ Bodegas Kuhlmann’s Molina says. But despite their success, Bolivian wineries have received little to no support from their government. Contraband wine smuggled in from Argentina is having a negative effect on the industry by reducing the sales of the genuine producers, impeding development. As of now there are no clear policies to fight it. More support from the local population would go along way too. Bolivians tend to prefer sweeter fortified wines to the dry wines enjoyed elsewhere. In an Interview for CGNT America, the Argentinian sommelier and blogger Laura Malbeck said, ‘The industry survives because it is an industry of passionate people.’ While it is important to receive international recognition, locals have to reinforce the market as well. 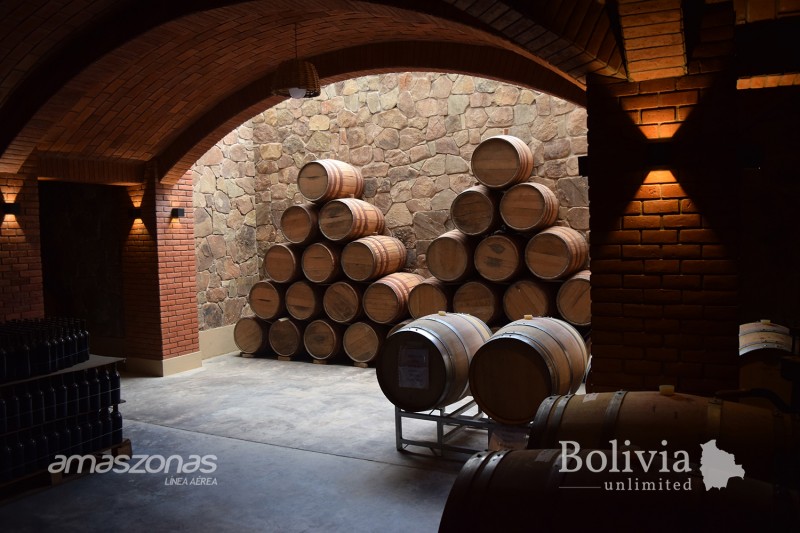