Why is Bolivian chicken so orange? 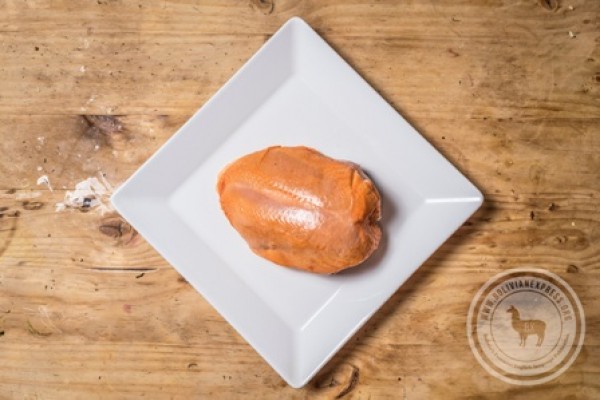 Now, we all know that you can’t make an omelette without cracking some eggs, and neither can you truly master investigative journalism without asking the big questions. 2017, the Year of the Rooster no less, has prompted Bolivian Express to pluck up the requisite courage to answer the biggest chicken-related question of all. Having put to bed the respective debates over which came first, the chicken or egg (the egg, obviously), and why on Earth the chicken keeps on crossing the road (because it’s got a death wish), it’s time for the crux: why is La Paz’s chicken quite so golden-orange?

Immediate assumptions proved unsatisfactory. Due to Bolivian chickens’ notorious ability to see in the dark, the obvious answer might be a densely carrot-heavy diet affecting their skin pigment. Alas, not true. Next, we wondered whether a double yolk, one destined for chickenhood, the other acting as a dye, might be the cause of these vibrant-orange caracasses. Again, a misconception. Could it be that the right-wing cockerel community wanted to resemble their tangerine-hued ringleader, Mr. Trump? Apparently not. Finally, it was posited that the media omnipresence of the artificially golden pin-up family, The Kardashians, might have led to an idolising culture of fake-tanning among this, the cluckiest of birds. Perhaps, much like the aforementioned omelette-destined eggs, we’d cracked it. ‘Don’t count your chickens,’ they said. . . ‘Go and do some actual research,’ they said. . .

An afternoon knocking on the fiercely guarded metal gates of the La Paz headquarters of Sofia and Imba, two of Bolivia’s major chicken vendors, proved as unfulfilled as the bucket list of an aspirational battery hen. However, as it so often does, our answer came courtesy of the workers on the ground.

Trawling through Mercado Villa Fátima, a vegan’s equivalent of Hell, or Hull to use its biblical name, we discovered that the bizarrely satsuma-coloured chicken on show was a result of an orange preservative embalmed on the late-chicken’s skin in order to increase the death-span of the animal on the shelf, and to feign the golden hue acquired by a rich, corn-heavy diet.