Why Didn't the McChicken Cross the Road? 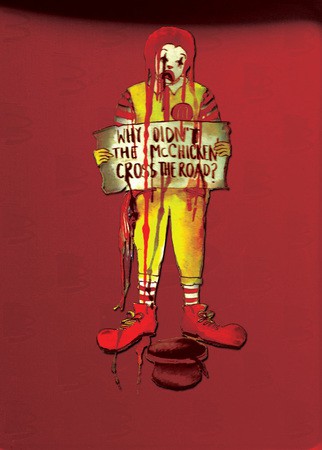 McDonald’s shut its doors in Bolivia in 2002. Theories are conspiracies are abound for its demise and eventual departure. In the latest turn of events, other iconic US chains are knocking on the country’s doors. Could this signal a return of the Golden Arches?

On average, an estimated 58 million customers are ‘lovin’ it’ every day in one of the 33,000 McDonald’s restaurants worldwide. Yet there hasn’t been a Big Mac served in Bolivia for over eleven years. Many have speculated as to why the corporation closed all eight of its restaurants here in 2002; a documentary was even produced in 2011 investigating ‘Why McDonald’s in Bolivia went bankrupt’. Political, social, economic, logistical and ideological reasons have all been put forward, but why the McChicken didn’t cross the road still remains an unanswered question.

After having courted Bolivian fast-food diners for four years, the corporate giant made the decision to pull out of Bolivia, making it one of the few remaining countries in the Americas without a McDonald’s. Surveying information to be found online, a common perception is that Bolivians don’t like fast food. An often cited documentary to advance this theory is ‘Why Did McDonald’s Bolivia Go Bankrupt?’, which claims that ‘Bolivians have nothing against hamburgers, but they don’t agree with the principle of fast food’. Bolivians consider a good meal to be made with ‘love, dedication, certain hygiene standards, and a certain cooking time’—therefore they steadfastly reject the idea of comida rápida . Yet a gringo like myself only has to meander through city streets swimming with salteñerias and Subways to realise this is just not the case. Besides, why would Burger King still be popular in all of Bolivia’s large cities?

I decide to ask the company itself why it withdrew from the country. A McDonald’s representative informs me—in the way that only a perfect PR team could—that the withdrawal was merely part of ‘an alteration of global strategy’. I won’t quote any of the rest as it reads slower than an encyclopaedia. Regardless, the facts do seem to indicate this would seem to be a just argument—in the same year it ditched Bolivia, McDonald’s withdrew from nine other countries, closing 700 stores in the process.

But is that the end of the story? It’s hard to tell, as the McDonald’s in Bolivia were primarily franchises rather than corporate locations, making the search for their records a difficult task. Finding anecdotes about McDonald’s was easier. ‘I remember McDonald’s as being a luxury, a treat for a special occasion. It was almost a sign of status to have your child’s birthday party at McDonald’s’, one Bolivian informs me. Perhaps this in itself explains the decline. In the rest of the world, the success of McDonald’s relates to its universal convenience and affordability. If anything, it’s generally associated with late-night revellers in varying states of inebriation and low-income families. Perhaps by primarily appealing to the aspirational end of the market, and not adjusting its menu or prices to its core market, were the main reasons for McDonald’s inability to secure a foothold in Bolivia.

Still unconvinced, I head to the streets to conduct a survey. Maybe here, with the customers themselves, I might be able to gauge the real motivation for the mighty McDonald’s retreat into oblivion. The best suggestion I receive was that the rejection was politically based. One middle-aged, particularly engaged gentleman leans forward, eager to answer the question—What do you think of McDonald’s and why did it fail in Bolivia? ‘The yellow “M” is synonymous with imperialism, an emblem of American ideals’, he says. Given Bolivian President Evo Morales’s at times belligerently leftist stance, it would seem fitting that something so identified with the United States should not succeed in Bolivia. Private US enterprise and hegemony appear to clash with Bolivian ideals.

Others support this claim. ‘McDonald’s was always the first place to be targeted when there were riots’, remembers one local. ‘It was a physical embodiment for everything we hated about the government’, recalls another. A little historical context is needed here. In 2002, the Bolivian president, Gonzalo ‘Goni’ Sánchez de Lozada, was a white, American-educated politician dubbed el ‘Gringo’ as he looked and spoke like one. (He’s currently in exile in the United States, facing extradition charges over the Bolivian gas conflict in which over sixty Bolivians died). During his presidency, anti-US sentiments were running high in Bolivia. As such, the golden arches became a clear target whenever there were riots. In particular, during a four-day strike in Cochabamba, the franchise was attacked. Perhaps they got the message, and fearing continued attacks due to the brand’s increasingly hostile reception were reason enough to understand that they were not welcome in the country.

Nowadays, however, the political turbulence that shrouded the future and safety of the McDonald’s brand within Bolivia is not as evidently apparent. The belligerent, anti-US segments of the population helped to get Evo Morales into power, and since his election there’s been a revindication of the traditionally impoverished and relegated indigenous class. Bolivia is also much more receptive to private investment from international companies now than it was ten years ago. With a burgeoning middle class with money to spend, McDonald’s might succeed were it to return.

Next year, another emblematic US brand will embark on a mission to ‘colonise’ the Bolivian market with one-pump vanilla lattes and Frappuccinos. This small step for Starbucks may signify a threshold moment for the Bolivian food market. Yet it’s arrival will leave us with the lingering déjà-vu feeling that we’ve seen this before. There may be something to the government’s proclamation of us having entered the era of the Pachakuti , based on a circular Andean conception of time which posits that history will repeat itself ad infinitum. With the indigenous majority well on its way to having its power reinstated after 500 years of oppression and inequality, there’s a corresponding increase in affluence within this group. This socioeconomic turn may inadvertently make Bolivian soil ripe once more for the Golden Arches to make their comeback. It remains to be seen whether this dual resurgence, ethnic and economic, will lead to further tensions between the new affluent indigenous peoples and the ‘empire’. They may well come hand in hand.