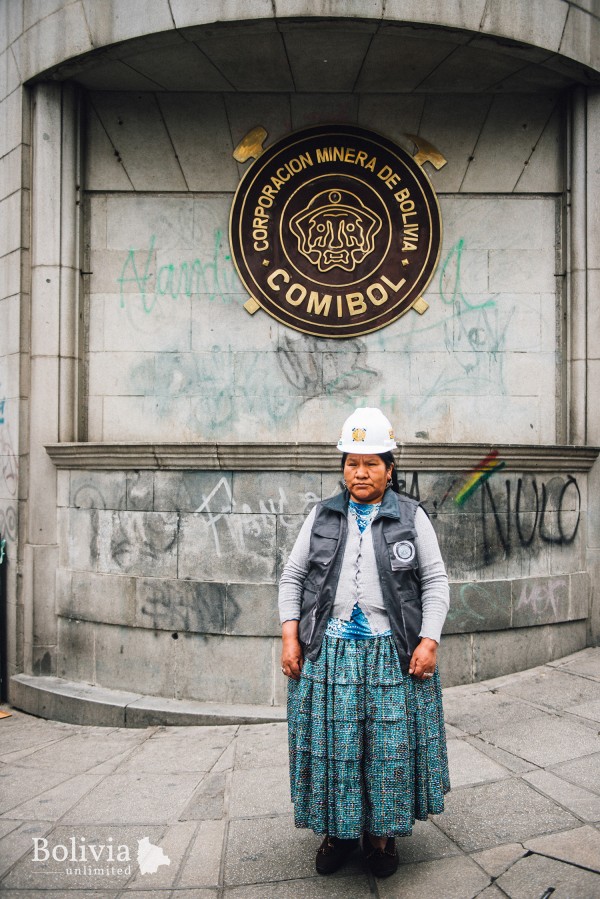 A Bolivian mine can be a tough place to earn a living, especially for a woman. All miners suffer from periodic injuries, but women must frequently contend with physical and sexual assault. Oftentimes, women turn to working in the mines after their miner husbands are killed in work accidents. Someone has to provide for the family, and as dangerous as it is, the mine allows them to scratch out a living as long as they accept the risks of the job. These women form a near-invisible workforce, often working more than 10 hours a day for only US$70 to US$100 a month, less than half the national minimum wage. In 2001, women miners were finally able to join FENCOMIN, the national miners’ syndicate, but their fight for safety and economic independence has not yet been won. They still lack pensions, education and guaranteed access to health care. Also, in Bolivia’s western highlands, superstition still prohibits the entrance of women into the mines.

According to the country’s national mining corporation, COMIBOL, there are around 3,000 female mining employees today in Bolivia, 600 of whom work inside the mines. These women are called palliris, a Quechua term meaning ‘to harvest’ or ‘to collect’, but used exclusively for the female miners who have the gruelling task of sorting minerals extracted from the mines.

Without work contracts, health insurance or the right to maternity or holiday time, women miners are often the greatest victims of abuse in the mining industry. Even though men work under the same extreme conditions, female workers find themselves the most vulnerable. Working in bitter winds and torrential rains and at much higher risk of tuberculosis and rheumatism than workers in any other industry, the average life expectancy of mine workers is only 40-50 years, according to Al Jazeera. For more than 10 hours a day, palliris have the task of pulverising rocks taken from the mines and sifting through the remains to separate the dust from valuable materials such as silver and zinc. What is discovered of value is then washed using toxic substances such as mercury, a practise that takes a severe toll on the health of the workers.

Women miners are often the greatest victims of abuse in the mining industry.

Even though women have had a presence in the Bolivian mining industry since the Spanish colonisation, according to Pascale Absi, author of Los ministros del diablo – an examination of the mines in Potosí – until recently the idea of women working in a mine in Bolivia was considered taboo, with strong resistance from the male-dominated mining community. In fact, women were often forbidden from entering mines for fear that the female presence would ‘bring bad luck’ and dry up all the gold, according to Absi.

Absi notes the common belief that a woman entering a mine will make Pachamama jealous, resulting in a poor mineral harvest that year. She writes about the mines of Llallagua, in the Potosí department, where it’s thought that the minerals disappear following the end of the next menstrual cycle of the woman who entered the mine.

In addition to these superstitious beliefs, sexism is also a prominent stumbling block which holds women back from pursuing a career in the mines – for example, many people believe that mining is too physically challenging to be performed by a woman. Additionally, the exploitative and dangerous nature of the work is cited when justifying the exclusion of women from the workforce, as if it were more acceptable for men to work in these conditions rather than unacceptable for all to be subjected to this work environment.

Despite these prejudices against females in the workforce, women have played a vital role in the mining industry, especially during the 1932-35 Chaco War against Paraguay, when Bolivian women took to the mines to replenish a workforce depleted by conscription. ‘How difficult can it be?’ Doña Paulina, a palliri from the Ckacchas Libres mining cooperative, is quoted in Absi’s book when asked whether women were capable of performing as well as their male counterparts in the mines.

Lately, though, solidarity within the Bolivian and international communities for the work of the palliris is stronger than ever. There was a clear demonstration of strong public support for palliris at a recent book presentation for the latest edition of Si me permiten hablar (Let Me Speak), on 28 November 2018 in El Alto by the Biblioteca del Bicentenario de Bolivia.

Written by Moema Veizzer and translated into 14 languages, Si me permiten hablar is a biography of the late Domitila Chungara, a palliri who played an essential role in supporting the mining-syndicate movement in South American mines. Since its publication in 1978, it has shined a light on working conditions in the mining industry and exposed the issue to an international audience.

Born into a mining family in 1937 in Potosí, Chungara was raised in a house without running water and electricity for only a few hours a day. Following her mother’s death when she was only 10 years old, Chungara helped to raise her five siblings despite suffering extreme poverty. She became a prominent member of the Union of Miners’ Wives during 1960s and survived the San Juan massacre in 1967, when soldiers shot at protesting miners and their families, killing 20 and injuring 70. She was even imprisoned and tortured during the 1970s dictatorship of Hugo Bánzer as a result of her determination to secure better rights for the mining community. Her ill-treatment by that government resulted in a miscarriage and lifelong injuries. In 1978, Chungara organised and carried out a hunger strike in protest against the Bánzer government. Thousands of Bolivians joined her, pressuring the government to release political prisoners and allow her and her compatriots’ husbands to return to their jobs in the mines. In her later life, Chungara focussed her efforts on improving political education for the younger generations in deprived neighbourhoods. She passed away in 2012 due to lung cancer, an illness that afflicts many workers in the mining community.

‘If we want to live in liberty on our land, under the same sky, we need to be dedicated to working together.’

Si me permiten hablar, having been continually in print since it was originally published and having been translated into many other languages, has made Chungara a national hero – so much so that at the celebration for the latest edition, an auditorium overflowed with audience members. Greeted with an applause and cheers that shook the auditorium, panellists – including the biographer Viezzer as well as the president of the Biblioteca del Bicentenario de Bolivia – gave heartfelt tributes to the heroine. However, despite the international publication of accounts describing the horrific exploitation and countless accidents within the mining community, there is still so much to be achieved in order to secure a safer future for mining families and women. The latest edition of Veizzer’s book is another important step in achieving greater rights for Bolivia’s oft-overlooked workforce. And it is instructional in how to change the future for the better. In the words of Chungara herself: ‘If we want to live in liberty on our land, under the same sky, we need to be dedicated to working together.’