Whiteout: The End of the Andean Glacier? 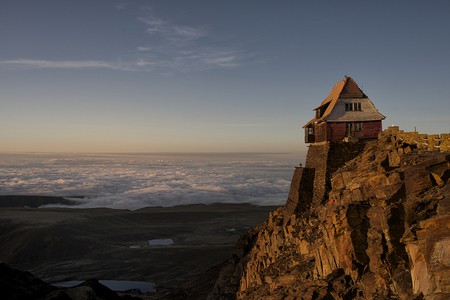 Glaciers aren't just important to penguins and polar bears. In fact, they contribute to the water you drink in parts of Bolivia today.

Not far from La Paz, on a lonely mountaintop, sits a building surrounded by rock. This is the Chacaltaya ski resort, once the highest in the world. But today the ski lift is closed because the glacier it relied on has melted away.

Most glaciers are located at very high or very low latitudes,­ the kind of freezing cold, extreme places you'd expect to find masses of ice. But a small percentage are tropical, and of those the vast majority are found in Peru, followed by Bolivia. Gazing around the city of La Paz, glaciers are not hard to spot, from the gleaming peaks of Illimani shining in the south, to the wedge­like Mururata and the single summit of Huayna Potosi. But could these ancient glaciers be headed the way of Chacaltaya, so that looking around La Paz in 20 years we see just rocky peaks without their icy caps?

Andean glaciers are shrinking at alarmingly rapid rates. In fact, according to the European Geosciences Union, 'Since the 1970s, glaciers in tropical Andes have been melting at a rate
unprecedented in the past 300 years,' and have shrunk by an average of 30 to 50 percent. This melt is vastly more important than the loss of a single ski resort, and affects tens of millions of people throughout the Andes who rely on glacial water for drinking, irrigation and hydroelectricity.

A glacier is like a viscous, slow moving river of ice that relies on snow and freezing temperatures at it head to recharge a mass that usually migrates downward at a snail's pace. In Chacaltaya's case, the mountain's altitude means it simply became too warm.

‘There are many causes for glacier melt,’ says Gabriel Zeballos, Teacher and Researcher at the Geographical Engineering Program of the Escuela Militar de Ingeniería in La Paz. ‘The fundamental cause is global warming, and that controls the recharge level, which keeps rising. That's what happened to Chacaltaya – there was no recharge given that its peak is relatively low in altitude - only 5300 meters above sea level.’

Today, residents of La Paz rely on glaciers to provide some 15 percent of our drinking water, according to recent studies by an international team of investigators. If that water source eventually diminishes, and it seems it will, El Alto and La Paz may have to construct more dams to retain river water. But dams bring their own set of problems, especially for communities downstream, which often see their access to water radically restricted.
Zeballos says that, according to the book Gestión de Aguas, Conceptos para el Nuevo Milenio by Margot Franken, La Paz - and all major cities - needs to change the way it uses water to deal with both an increasing population and the possible loss of part of its water supply. ‘We take potable water and use it for everything, even toilets. We dirty the water, and then we pump it into a dead river,’ he says, referring to the contaminated Choqueyapu River, which flows through parts of La Paz and carries water away from the city. A more sustainable solution would be that instead of sending this valuable resource away, water from sinks and showers be re-used for purposes like irrigation, returning it to the land locally.

As global temperatures continue to rise, Andean glaciers, due to their special position at high
altitudes near the equator, will continue to be disproportionately affected by climate change. We're probably not looking at the total disappearance of Andean glaciers in the next few decades, but they will continue to melt and become smaller in ways that spell change and hardship for many communities.