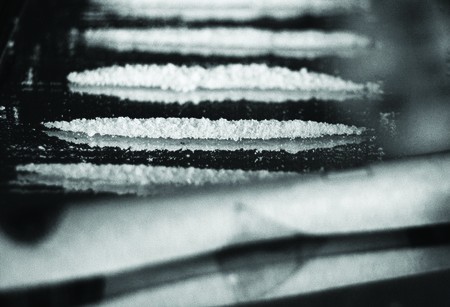 The Distorted Reality of Cocaine Tourism

In a bar, a woman discretely leaves for the toilet from time to time. When she is back she seems rejuvenated– fun, talkative and enthusiastic. We are now going to a place where discretion is no longer necessary, Route 36. Possibly the world’s most famous cocaine bar.

Rumours of this illicit place had raised my expectations but when we walk through the unimpressive door of a rundown apartment building I am disappointed: the interior is tacky, perhaps suitably so. Bright orange and green sofas form a tasteless ensemble; neon lights lead us to a distorted world.

A colourful mixture of people surrounds us: alpaca-jumper-clad backpackers mix with hipsters and provocative women. A group of Australian couples in their thirties are sitting next to us. On the dance floor they bend and buckle around, jumping and singing to the mix of mainstream music. This enthusiasm is only shortlived, after a few moves they leave the dance floor - back to what they are really here for - consumption. The dance floor will remain empty for most of the evening.

Route 36 epitomizes a rapidly growing trend across Bolivia - cocaine tourism. The people who visit here are not regular cocaine users; they see Route 36 as another experience on their tourist trail of South America- Machu Picchu, Death Road, Route 36. The bar moves every few months to avoid being shut down, so its location is passed on through word of mouth in backpacker hostels. This is a world made up entirely of tourists, a gringo heaven, there are no Bolivians in Route 36 (aside from the owners), mainly because they wouldn’t be allowed in. This is both for security reasons and so that the bar maintains an exclusive clientele.

An important source of tourists’ fascination with the infamous cocaine industry is the book Marching Powder by Rusty Young. The book describes the tale of a British drug smuggler, Thomas McFadden, who was imprisoned in the notorious San Pedro prison. McFadden began to run prison tours for tourists and describes how ‘during the first year and a half all my visitors were backpackers aged in their twenties who were looking for adventure’, also recounting how the best cocaine in the country could be found inside San Pedro. The book can be found on the bookshelves of many hostels, being passed between travellers, eager to read this bizarre and gripping testimony.

Today The Lonely Planet, the backpacker bible, strongly advises against visiting the prison, stating that tours are illegal and warning readers that the danger of visiting it to buy cocaine cannot be overstated. There is no protection or guarantee of tourists’ safety within the prison and the Bolivian authorities have been cracking down on prison tourism: in 2009 in order to solve the problem they restricted prisoner visiting hours, a change which resulted in riots in the prison. However, with places such as Route 36 it is clear that cocaine tourism continues to flourish. McFadden famously claimed that San Pedro was the best place to party in South America and it is clear that backpackers’ desire for this type of adventure hasn’t waned despite the crackdown on visits to the prison.

Yet cocaine tourism is but a facet within the long and diverse history of coca leaf products. The coca leaf in its natural form is an integral feature of Bolivian culinary and medicinal traditions, grounds on which the current government defends the right to grow it. Nonetheless, it is no secret that the highest profits derived from coca come from activities associated with cocaine production. This market is perverse as is it is subversive, for while Bolivia is the second largest producer of cocaine in the world (just behind Colombia), it is not a significant consumer. Bolivian cocaine usage is confined to small segments of the elite classes and tourists, a negligible business compared with the export industry: the cocaine produced in Bolivia is exported to 174 countries, of which North America and Europe, make up 67% of global cocaine consumption, according to the United Nations Office of Drugs and Crime statistics 2008. Nevertheless, tourists continue to seek the thrill of cocaine at its source for two reasons: cost and purity. The further cocaine travels the more expensive it becomes, costing $108 per gram in Europe and North America versus $11 for the same amount in Central and South America. Once it has made its way across the trafficking routes it is also more likely to be cut with other products and chemicals, such as baking powder, meaning that there is an implicit guarantee of purity in Bolivian locales like Route 36.

Cocaine tourism may have made a name for itself in the country, yet it represents only a speck in the global context, in which Bolivia remains predominantly a producer. Meanwhile, the highest consumption rates worldwide are in North America, UK, Spain and Italy, while cocaine in Bolivia, cheap by international standards, still remains financially out of reach for most Bolivians, and has not become a widespread part of popular culture in the way it has elsewhere. Where Eric Clapton croons of the drug -‘she don’t lie, she don’t lie, she don’t lie; cocaine’- Bolivians are more likely to be found singing ‘hoja verde de la coca...compañero de la vida’ (green coca leaf... my partner for life) or ‘coca no es cocaína, coca es la hoja sagrada’ (coca is not cocaine, coca is the sacred leaf). This reality is often lost upon tourists who believe that route 36 might offer an authentic experience. While it remains niche, Bolivian black market entrepreneurs are tapping into tourists expectations for drug availability and selling an experience that allows tourists to feel they’re getting the real deal in what is ultimately an illusory setting.