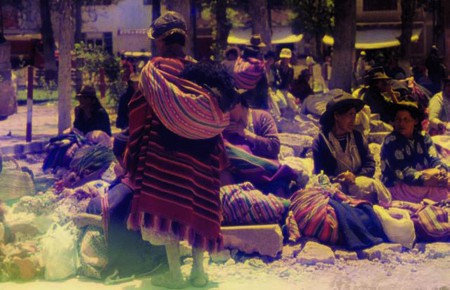 Every Sunday Mariano Roque Ylofayo travels 60 km from the city of Sucre to Tarabuco to sell traditional local clothing at the town’s legendary market. The historical charm and significance of Mercado de Tarabuco has been attracting buyers and sellers alike from across the surrounding communities for several centuries.

What’s perhaps most distinctive about this market is that money is not needed in order to leave with goods. Whilst money can be used, many prefer to bypass using money and simply exchange their products through a bartering process, or trueque. 'I think that it is better when goods are exchanged for goods and money is not involved', Mariano tells me. 'There are times when I find that with money one can be deceived'.

There is a certain sense to this logic: people at the market know what they have and what it would take for them to give it up, so why let money complicate the process? However, once Mariano starts to explain how the exchanges take place I begin to think that perhaps there are no real practical reasons for this bartering system, but rather that it is an attempt to keep alive a cherished tradition for which the market has become well known.

The value of products are first converted into monetary terms, and then converted back into the value of the other products involved. 'This poncho would cost Bs. 20, let’s say 3 kg of carrots is Bs. 6; so my poncho would cost 10 kg of carrots' Mariano explains. So rather than a way to bypass the need for money, monetary value is paradoxically at the core of this type of exchange, being used as a proxy to decide the relative value of each good.

In addition to this, there is limited room for negotiating a yapa or rebaja for products when exchanging them, as the value of the products are predetermined by the leaders of the market in a meeting with the Mayor of Tarabuco. 'All the prices are closely regulated by those in charge', explains Mariano.

The market of Tarabuco was founded next to the mountain Qara Qara on the 29th June 1578 by the governor Don Francisco Toledo. Centuries later, its surrounding countryside was host to three of the most crucial battles during the Wars of Independence. Much of this history is remembered and celebrated during Tarabuco’s many festivals. Along with its history, the town’s architecture and its natural beauty have led to Tarabuco being declared a site of ‘National Heritage of Historic and Cultural Priority in Bolivia’.

'As well as celebrating the anniversary of Tarabuco during the festival of San Pedro on the 29th June, there is also the celebration of the Virgen del Rosario in the month of October,' Mariano explains. 'There are many traditions in Tarabuco. These are times to be spent dancing, drinking and sharing with family.'