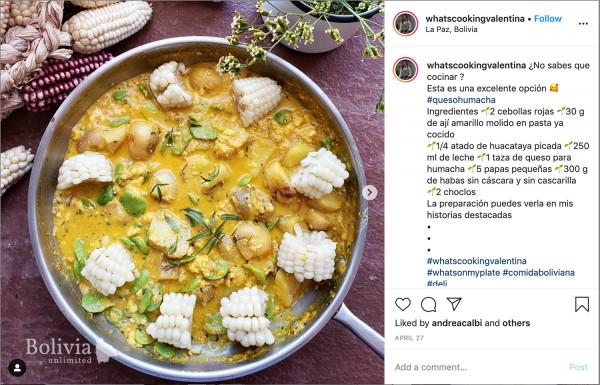 A rising female chef in Bolivia

This article was originally published in the issue 82 of Bolivian Express.

We all know women who cook: mothers, sisters, grandmothers, the woman around the corner who makes api con pastel. Finding a female cook is easy, but finding a female chef? That’s another story. The culinary world is still a male-dominated space, even though these chefs usually talk about how following the recipes of their mothers.

But things are slowly changing. Not long ago I met Valentina Arteaga, the woman behind the WhatsCookingValentina Instagram account. Arteaga is a cooking teacher for children at the Alalay foundation, she makes videos of recipes for the food magazine Azafrán and is the owner and chef of a soon-to-open restaurant. Cooking has always been her passion. She studied in a culinary school in Peru for three years, interned at Gustu, worked as an intern for a year at a Ritz Carlton in the United States and completed a master’s degree in Spain.

Two years ago, Arteaga came back to Bolivia. At first, she wanted to open a restaurant, but the project seemed too complicated at the time. So she became a food consultant. Five months ago, she started her Instagram account, which has now more than 2,000 followers. In light of this quick success, she decided to launch her brand What’s Cooking Valentina, with the goal of doing something new, something that doesn’t exist in Bolivia. That’s how she started taking pictures of her meals in her kitchen, sharing recipes and writing about the places where she likes to eat.

Everything about her brand concerns Bolivian food and culture. It gives people from abroad an insider’s look into Bolivian cuisine and the local way of life. She shows the Bolivian way of cooking sopa de mani for example. She combines traditional products with non-traditional meals, like an avocado salad with roasted chuño, tomatoes, onions and a cilantro dressing.

‘You are pretty, you are going to be successful’

Arteaga’s dream of taking her vision to the next level and opening a restaurant is close to becoming real. She recently found a place and says that in three or four months people will be able to sit at one of Phayawi’s tables. Phayawi ‘will serve Bolivian food, but I can’t tell you more, I am keeping it secret for the moment,’ she says. The concept of Phayawi (which means kitchen in Aymara) is also to prove to young cooks in Bolivia that, ‘there is a lot to do here… This is a moving country… Everything is yet to be built.’ A lot of her Instagram followers have asked if she thinks it’s worth moving back to Bolivia, to which she always answers ‘Yes, you should come back and invest in Bolivia.’ 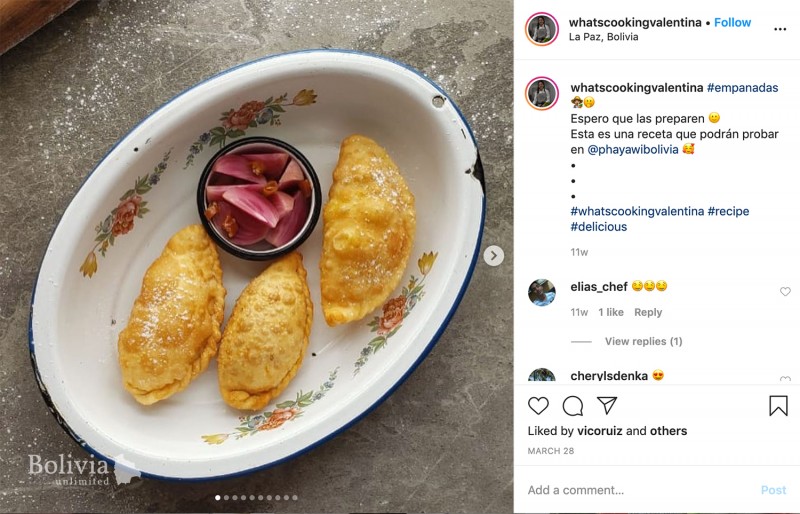 Teaching and sharing her love of cooking is equally as important to Arteaga. This is why she is involved with the Alalay Foundation where she gives cooking lessons to children. The purpose of the foundation is ‘to reverse the conditions of affective, economic, social and spiritual poverty for children and teenagers in high risks situations.’ She volunteers two times a week, one time to cook with the boys, and the other time to cook with the girls. In one of her lessons for girls she taught them how to prepare greek yoghurt with fruits. Arteaga not only teaches her students how to cut and select the ingredients. She also teaches them why it is important to have clean hands before cooking and to be polite and respectful to others. She takes the children to different restaurants so they can discover new types of food. The next visit in her lesson plan, for example, is a Japanese restaurant where her students can try sushi and other dishes for the first time in their lives.

‘Women need to empower each other to take the Bolivian gastronomy to another level.’ —Valentina Arteaga

Even though Arteaga is a rising chef in Bolivia, being a woman in a man’s world can sometimes be hard. A colleague once told her: ‘You are pretty, you are going to be successful,’ but comments like those only get on her nerves. One of the reasons she came back to Bolivia was to show people that women could be as successful as men in this trade. After all there are very successful female chefs in Bolivia, like Marsia Taha Mohamed, the current head chef at Gustu, or Gabriela Prudencio, chef at Propiedad Pública. Arteaga wants to inspire women, which she is already accomplishing through her Instagram account.

‘Women need to demonstrate they are capable of doing what men are doing,’ she says. ‘Women need to empower each other to take the Bolivian gastronomy to another level.’