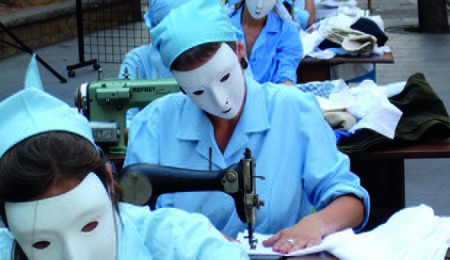 Stitching their way across the seams of country borders, Bolivians head south in search of a better future.

With over 1.2 million residents, the largest Bolivian community outside the country is in Buenos Aires. Despite the promises of vast opportunities and dreams of an improved quality of life , the reality can be much different once they arrive. Rose Acton explores how the prospect of living in near-slavery conditions is sometimes less terrifying than the prospect of returning to the country empty-handed.

Buenos Aires is a vast and diverse city, a cosmopolitan metropolis laced with colonial architecture and peppered with downtrodden villas. It attracts a remarkable number of Bolivian migrants, drawn by the bright city lights. Currently around 1.2 million Bolivians live in the Buenos Aires province alone, a further 300 thousand scattered across Argentina, most in search for a better life and increased opportunities.

The flow of Bolivians to Argentina has been a trend for many decades; during the late 1980s and early 1990s, many ex-miners from the valley of Cochabamba travelled to Buenos Aires to work in sewing workshops and other locations. The Argentine economic crisis of 1999–2002 meant that many Bolivian migrants returned home, while others continued their migratory cycle to Spain. Despite Argentina’s economic recovery following the crisis, it has recently begun to suffer stagflation, a term used by economists to describe a mix of stagnant growth and strong inflation.

Amador Choque Ajata first came to Buenos Aires out of curiosity and returned to live there because he missed ‘how big and different things are compared to La Paz—the city is more complete.’ He tells me that the majority of Bolivians are curious to see what things are like in Buenos Aires; they come for the standard of living. They see the opportunities for work, and they are impressed by the transportation and health system. Amador also tells me how many migrants are impressed by different consumer products which aren’t available in La Paz.

Bolivians who arrive in Buenos Aires traditionally work within the textile industry. However, at least for the first year or two, this tends to be illegally – trabajan en negro. This illegal migration status clearly affects migrants’ choices and opportunities, and many Bolivians find themselves working in precarious conditions. The number of people living in near-slavery conditions is estimated at around 500,000 people; half of these are garment workers who live and work in sweatshops. Employers typically pay for the immigrants’ transport from Bolivia, as well as their food for the first few weeks, leaving many trapped: one woman described how she had to work for six months without a check in order to pay back all the money she owed; another man described how he earned $30 in first month, of which his boss kept $26. The threatening behaviour of their employers and a fear of the authorities leaves them with few other choices. Many are also physically trapped, with employers locking the doors and as many as 10 to 12 people living per room. Long working hours are the norm, with some employees expected to stay at their machines from as early as 7 am untilaslateas1amor2am.Ifthemigrants had the necessary legal papers – trabajan en blanco – they would have access to medical and work insurance and would be able to work fewer hours by adopting other occupations as cleaners, receptionists, etc. However, this is rare, as most Bolivian migrants are in irregular situations, severely limiting their options.

The conditions related here form a stark contrast to the initial dream of a better life. Amador portrays how people who arrived 10- 15 years ago had many opportunities, due to the increased purchasing power afforded by the Argentinean peso’s parity with the dollar. Back then, a peso would buy you up to 6 Bolivianos, today it will only buy you 1.2 Bolivianos- with this economic climate, many recent migrants now work just in order to survive. Amador states ‘it’s not like before- it’s not like the Argentinean dream. The currency used to be stronger, people used to be able to save. But now that the Argentinean peso is closer to the Boliviano - there are few opportunities.’

The Bolivians who come to work in Buenos Aires rarely integrate or are welcomed into the Argentine community; in fact, they face widespread discrimination and racism. They encounter widespread perceptions which label Bolivians as illegal, racially inferior and job stealing. Edson Veizaga, who lived in Buenos Aires for 13 years, states that this discrimination is in the collective consciousness. The media plays a big role in this issue: ‘Once I remember on Crónica TV, a very popular news channel, they said “Three people and one Bolivian died during an accident on a construction site.”’ He then tells how the word ‘boliviano’ is used as an insult or synonym of ‘dirty,’ ‘ignorant’ and ‘low class.’ Amador also tells me how even seemingly complimentary stereotypes conceal deep-seated racism. ‘They say the Bolivian is a good worker. That is a euphemism. What they mean to say is that they offer cheap labour. They will do any job at any price.’ Amador says that the Bolivian community is very closed, having created a tight-knit social network amongst themselves. He says that this insularity further hinders integration and that it is not just Argentinean society that is to blame.

A vast separation exists between the two communities: Bolivians live and socialise in different quarters to Argentineans. Famously, many Bolivians live in Villa 31, a shantytown which spreads out from the port of Buenos Aires. A Bolivian immigrant describes how he would never go to the Argentine bars because they discriminate against his countrymen – ‘They think you are just an Indian’, he says, and ‘this guy is ignorant; he’s a dirty negro.’

One display of traditional Bolivian culture in Argentina is the Fiesta of the Virgin of Copacabana, which is a large-scale gathering attracting around 30,000 participants and spectators, the majority of whom are Bolivian, held in the Charrua neighbourhood. At first glance, this would appear to be a potent symbol of Bolivians united, yet this is not necessarily the case. For example, the morenada is a way of displaying one’s economic status with the dominant protagonists being those who own or operate textile workshops, together with the Bolivian immigrant professionals and white collar workers who arrived in the 1970s and 80s. Their lavish outfits clearly set them apart, the most expensive of these being the super achachi, which comes complete with gloves, headpiece and careta (scepter), all of which together cost approximately US$500 to purchase and US$300 to rent.

This hierarchy found amongst Bolivians at the Fiesta of the Virgin Copacabana is indicative of real life, particularly between textile employees and their bosses. Painfully, despite their mutual discrimination and heritage, some Bolivians have reported that they prefer working under Korean bosses rather than Bolivian bosses, as they are seen as more reliable at paying their wages. Bolivians who progress to the stage of owning their own factories use the same methods under which they were exploited. Amador states, ‘It’s Bolivians exploiting Bolivians – it’s those people who arrived 10 to 15 years ago. They come to Bolivia and bring people over.’

Las Alacitas, a Bolivian holiday in which people purchase miniature versions of things they desire – anything from cars to university titles – which are then blessed by a yatiris, is celebrated by many Bolivians in Buenos Aires. The striking difference is that in Buenos Aires, miniature factories are are offered for sale, showing the celebrants’ desire to one day own a real, full-sized factory of their own. Often when immigrants arrive, it is on the basis of the promise that the factory owner will help them set up their own factory in the future. Amador admits that he at one stage considered setting up one of his own; however, he has decided against this route, as ‘people who’ve opened a workshop suffer from much stress – it’s a big responsibility to provide people with food and lodging, its a total commitment’. In order to make a profit, ‘you have to maintain an open workshop, working at all hours.’

The Bolivian migration to Buenos Aires is a curious one, from outside the main migration motive sees to be a search of better opportunities while working illegally in textile workshops under extreme working conditions. It appears inherently paradoxical - why do people choose to stay? Amador said that people choose to stay due to shame, ‘They feel they have left their country to build a future. They hope to return to the country and prove they have made a better life. What face will I give to my brothers, to my parents? The commonly held belief is that people who live in Argentina earn more.’ These immigrants’ mentality and silence on the issue clearly fuels this cycle of disparity. And so the cycle continues: Many more immigrants continue to chase the Argentine dream, even upon realising that it’s their pride which leads them to stoically endure their situation.