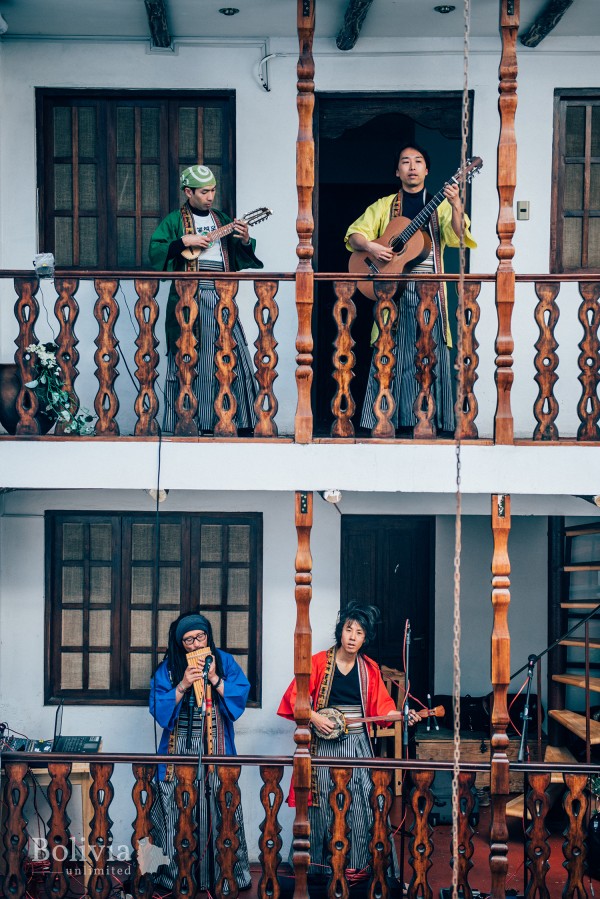 Culture and Going Out

In 1899, Bolivia’s first Japanese immigrants made their home here. Next year, 120 years later, this historical moment is being reflected in music. Wayra Japón Andes, a band composed of five Japanese men who migrated to Bolivia to learn and play Bolivian music, are the first group of musicians to combine the sounds and techniques of both countries.

Japanese interest in Bolivian music is nothing new; in fact, Bolivian bands have toured Japan since the 1970s, and all the members of Wayra Japón Andes were inspired to explore Bolivian music in their teenage years whilst still in Japan. Guitarist Hiroyuki Akimoto and charanguista Kenichi Kuwabara joined Andean music clubs whilst at university, and Kohei Watanabe and Takahiro Ochiai were exposed to Bolivian instruments – the charango, and quena, respectively – from a young age.

The music of Bolivia was the defining factor in these musicians’ decision to migrate across the Pacific Ocean. Akimoto was enchanted by the culture upon arrival in Bolivia, and at only 18 years old he decided to remain for more than just the one year he planned on staying. ‘After a year, there were a lot of things left to study, more to learn, more people to meet,’ Akimoto says. ‘So I called my parents in Japan, and I told them that I wanted to stay longer.’ Kuwabara also arrived in Bolivia planning to stay only a year, in 2007, but was drawn back by the culture and ended up migrating permanently in 2011.

‘I wanted to come here and learn about the lives of Bolivians, how they live with this music.’

For the individuals within the group, the culture they are exploring goes beyond music. Akimoto arrived in Bolivia in 2000. ‘I decided to come and see Bolivia with my own eyes, first only for one year,’ he says. ‘I listened to a lot of CDs of Bolivian music, and I liked the sound of the quena. There were some similarities with traditional Japanese music, and I have been playing it for the past 18 years.’ Similarly, Kuwabara migrated to Bolivia to study the culture around the music. ‘I am a charanguista, and in Japan I started playing,’ he says. ‘I wanted to come here and learn about the lives of Bolivians, how they live with this music.’

Wayra Japón Andes was formed in December of 2015. Before that, all members were in other bands playing traditional Bolivian music. Charanguista Makoto Shishido, who is based in Cochabamba, is a member of Los Kjarkas, the hugely popular Andean folk band. Other Wayra members have played with Anata Bolivia, Música de Maestros and Sumaq Wara – all traditional Bolivian music groups. Explaining how Wayra started, Akimoto says, ‘We are Japanese residents; this is our experience – why not try something new? We decided to do a musical fusion, Bolivian and Japanese.’ And it’s a distinct combination. The Andean sounds of the quena (a flute-like instrument) and the charango (an instrument similar to a small guitar) are pleasantly complemented by the three-stringed Japanese shamisen to give Wayra a unique sound. Even the band’s garb is a fusion: Japanese kimonos with aguayo embroidery.

Whilst the group's first album (Gracias Bolivia, released in 2015) contains mostly Japanese songs translated into Spanish, their upcoming second album (Viva Bolivia, to be released next year) introduces their experimental blending of Japanese and Bolivian sounds, and will include original songs. ‘The second album has two original songs already, written by us. In the first album, the ten songs are covers, with Bolivian rhythms. Some are anime and video-game themes: Dragon Ball Z, Super Mario Brothers – these are very well known in Bolivia,’ Akimoto says.

Watanabe is optimistic about the release of the group’s second album, mentioning the connection Wayra have made with the younger generation. ‘Young people are not listening to folkloric music, but they like music from anime, and we play that so they like it,’ he says. ‘So we are doing fusion. Hopefully, they can get interested in traditional folkloric music in the future.’ Ochiai exudes a similar sense of anticipation for the coming years, suggesting Wayra will look to combine Japanese and Bolivian cultures in more ways than just through music. ‘In any case, we are going to keep doing music,’ he says. ‘And we also want to do something cultural between Bolivia and Japan – like ambassadors.’

Late last year, a Japanese tour allayed the band’s concern about their fans’ reactions to their new musical direction. ‘We went on tour in Japan, in nine cities, and most of the rooms were full – they had about 200 to 300 people,’ Akimoto says. ‘And we were a bit worried because Japanese fans of Bolivian music have a certain image of the music that has to be like Los Kjarkas or Savia Andina. Our music is fusion, and it’s very different when it comes to instrument, melodies, language. However, Japanese fans of Bolivian music and people who knew nothing about it liked it the same.’

The group are keen to express their love for Bolivia through music, rather than just a simple love for Bolivian music. Such emotion can be felt lyrically and melodically in the new original songs of Wayra Japón Andes, and it perhaps explains the success and popularity of the group. ‘We are lovers of Bolivian music,’ Akimoto says. ‘Thanks to Bolivian music we have met here, and so we will dedicate our lives to the music.’