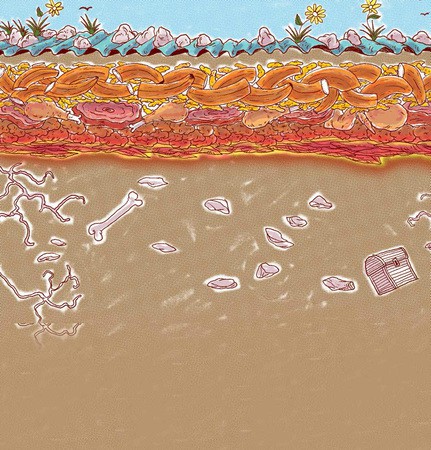 The Fading Art of Cooking in the Earth

Watia, the art of cooking food by burying it in hot earth, is an ancient Bolivian tradition. For Bolivians, cooking this way is to live the rituals and share the tastes of their Inca ancestors, explains Adrian Cachi Inca, a modern-day watia practitioner.

For all their emotional significance, however, watia dishes are becoming harder and harder to find in today’s Bolivia—something I discover only after two minibus rides, two taxis and a total of five hours looking. Adrian’s restaurant, El Carretero, lies in the dusty neighbourhood of Huajchilla. With its wide single road, huge horizons and dawdling trucks, Huajchilla is strongly reminiscent of the classic American Midwest, seemingly less a town than a mere tollgate on the road’s continuing journey. Like the Midwest, it also has the feel of being out in the sticks—it’s a good 25 kilometres from central La Paz. So, having travelled over an hour to get there, it is somewhat crushing to discover that, today, watia is not on the menu.

Still, Adrian—a stiff man, whose stern façade occasionally creases with glee (usually at the naïveté of my questions)—obligingly walks me through the process of his pamparu (the Quechua tribal name for watia). He explains that the embers at the bottom of the earth oven must be started at 6 am, as it takes two hours for the earth to warm up. Another three hours are needed for the meat itself—almost always pork or chicken—to be ready. He uses greda soil taken from the local area to seal the lid of the oven, which helps tenderize the meat. We even enjoy an elaborate fake photo shoot, with Adrian lowering some delicious-smelling marinated chicken into the cold pit (and leaving me in no doubt that when the Incas ate, they ate well). But for all our pleading, the oven is not coming on.

The reason for this is the bad weather. In traditional watia cooking, rain dampens the earth so that it can never become hot enough to cook with. For Adrian, the reason is more modern: rain scares off customers, and without a full house it is not worth the effort that watia demands. This pleasing continuity with the conditions of the past is what, for many, makes watia special. Yet it is also what endangers its continued practice today.

Watia is simply a time-intensive labour. The hours involved mean that Adrian can only cook one batch—serving around 30 people—per day, far less than the output of most modern restaurants. At its most authentic, watia is even more of a challenge: though Adrian does rely on the heat of the earth (unlike many supposed watia restaurants in Huajchilla, which simply use modern ovens), he does have the advantage of a metal lid to seal the hole. Traditional watia cooking involved covering the food with earth—and if any steam escaped the whole dish would be ruined. Guessing when the food was ready to be uncovered, then, would have taken considerable intuition and skill.

At its heart, watia has a similar idea to old Moroccan tagines or Chinese clay teapots—that the earth absorbs flavour, which it then also imparts onto new dishes. Everything cooked or served in that earth carries the memory of dishes made before it: food becomes history. But cooking this way involves a level of care and patience that’s at odds with an increasingly mass-produced world. It is little wonder that, as Adrian tells me, there are only two watia restaurants left in Cochabamba, which was once a watia stronghold. Indeed, the big question seems to be: Will the next generation of Bolivians get to experience watia?

Adrian tells me about his clientele, mostly middle-class families, who often rent out the entire restaurant for special occasions. It seems to me that this might be the way of watia in the future. As food generally is produced on an increasingly industrialized scale, those with the money will often fork out for something unique. Of course, this risks turning watia into something of a novelty—a fun anomaly in a culture that it no longer fits—and not, as it once was, a glimpse into an older pace of life. But perhaps this is not to be helped—and even if watia becomes little more than a source of excellent chicken, that’s nothing to be sneered at. After all, when has KFC ever tasted this good?