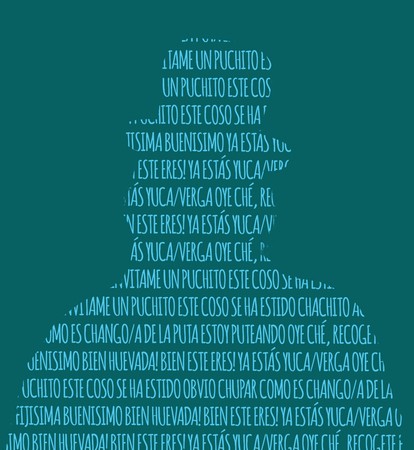 Things you notice when you first arrive in La Paz: the mountains, the cholitas, the traffic… and then the resounding choruses of ‘Yaaaa’ exclaimed by the younger generation, a linguistic idiom that has infiltrated every corner of the city, from the slopes of El Alto down to the depths of the Zona Sur.

This modismo has been invading eardrums throughout La Paz for a while now, and its popularity shows no signs of abating. It’s often used to express delight and/or agreement after the punchline of a good joke. Claudia Chambi, a teacher from the Instituto Exclusivo Spanish school in La Paz, believes that the notorious sound has been in use for well over a decade. What started off as an idiom amongst chicas has become a universally accepted part of paceño speech, and not just for the young generation. You can hear the expression used by ciudadanos of all ages in all parts of the city.

In fact, many slang words here in La Paz have become so ingrained that they are no longer considered slang. Besides the aforementioned yaaaa, consider the terms caserita, ahorita and digamos. According to Georgina Herrera Moreno, a linguist at Bridge English Language Center in Denver, in order for such expressions to survive, they must be widely adopted by the group who uses it. And this is exactly what has happened: these words are now accepted markers of typical paceño speech.

Each generation brings new words to the language, allowing its members to express themselves, a communication system that acts as a powerful tool in shaping social identities.

Whilst defenders of ‘standard language’ regard slang as degrading, Tom Dalzell, editor of The New Partridge Dictionary of Slang and Unconventional English, argues that slang gives each generation the ‘chance to shape and propagate its own lexicon…to exercise originality and imagination.’

If slang is an indicator of social identity, it is no surprise that as new words and phrases enter the lexicon, regional variations exist even within the city of La Paz, both in dialect and accent.

Down in the Zona Sur, young speakers demonstrated the adoption of American English in their speech, which could be seen by the use of taguear, facebookear, whatsappear... Well, you get the picture. Due to the affluent nature of this neighbourhood, the young people here are growing up with more access to computers and the Internet compared to other areas of the city such as El Alto, an economic divide that accounts for more exposure to English in this region.

David Crystal, a linguistic expert and author of The Cambridge Encyclopedia of the English Language, states that ‘language itself changes slowly, but the internet has speeded up the process of those changes so you notice them more quickly.’ And with the rate at which technology evolves, it’s unsurprising that the next generation are adopting words into their lexicon to express concepts with no equivalent in Spanish. The addition of the suffix ‘-ear’ quickly facilitates the borrowed foreign words into the lexicon.

Interestingly, this process of adopting foreign words into the lexicon is highly reminiscent of how Quechua changed when first borrowing words from Spanish. Consider the words cuadernota, mesata, and vasota, all Spanish in origin but with the added suffix ‘-ta’ to mark them as Quechua.

The youngsters we spoke to also highlighted the difference in pronunciation of R throughout the city. As a foreigner learning Spanish in the city, it is certainly hard to grasp. They told us about its strong pronunciation down in the Zona Sur, compared to the more slurred pronunciation used in the centre and up in El Alto, where it is realised more like the pronunciation of Z. The often-quoted perro in Spanish has become almost a cliché for its variation in pronunciation and, if you’re lucky, in La Paz you might even hear it said like pezjho.

So at what point does slang become accepted as official? The youngsters that spoke with us about their language use unanimously mentioned the Yaaaa, which highlights what a conscious and prevalent part of paceño speech it has become. And each year thousands of slang expressions are accepted into the official dictionaries of languages around the world.

And on those grounds, Yaaaa has a great shot at making it official. We can only hope to see it in the dictionary one day.