Voices From a University Protest 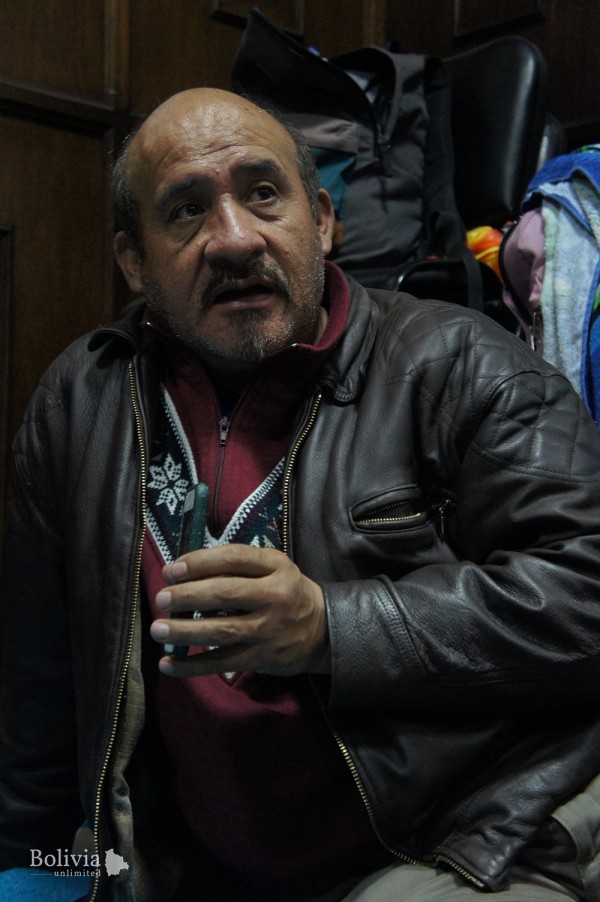 The sounds of shouts, horns and flares accompanying bustling crowds, road blocks and picket signs often greet daily commuters in La Paz. In Bolivia, marchas are almost impossible to avoid and can be dismissed as normality. However, in recent months, the University of El Alto’s (UPEA) demands for increased government funding have lead to a seven-week long protest on the streets of El Alto and La Paz, that has claimed the life of a student protestor. This ongoing protest has exposed several contradictory narratives in the country between the state and the people.

The ongoing campaigning is primarily focused on amending Ley 195, which allocates the distribution of funding to the various public universities in Bolivia. At present, UPEA receives 0.355% of national yearly tax collections, but they demand an increase to 1.4%, or around BS 222 million yearly. Protesters have rejected the government’s BS 70 million offer to solve the problem, arguing that the sum would do very little to address UPEA’s BS 152 million deficit. David Flores Vargas, a UPEA professor participating in the hunger strike as part of the protest, explains the sum ‘only alleviates rather than removes the issue. It means that next year we will have to protest again, every year it will be the same,’ he says. The movement is after an amendment to the law that secures future funding.

The government claims that there is no adequate justification for the requested sum, and sustains that a change to the law would be ‘immoral’ as it would take away funding from other public universities. However, in the eyes of the protesters university’s current budget does not reflect neither the size of the university nor the quality of its education. According to Flores, ‘UPEA is 18 years old, and has undergone a “natural” growth. Its student population has increased from 20,000 in 2011, to 47,000 in 2017.’ Flores believes that the law needs to be updated in order to correspond with this growth, since it is the government’s constitutional responsibility to look after the country’s education. 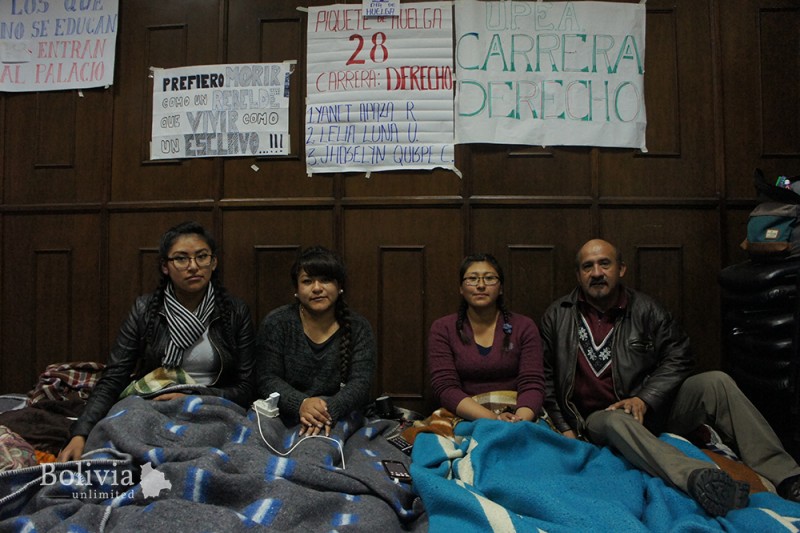 Whilst the Bolivian constitution exalts the freedom of the press and freedom of expression without censorship, the protesters believe that they haven’t been able to fully exercise these rights. In response to the government’s accusatory words regarding the movement, Nicolas Mendoza, founder of UPEA, replies: ‘It is, as always, a situation in which the facts are distorted.’

‘They have denounced us as vandals,’ says Edgar René Quispe Colque, another UPEA professor who has joined the hunger strike. ‘But this has been a common way of dismissing protesters for many years now, especially those of El Alto,’ he adds.

Flores also distrusts the media. ‘Since I have a history of political activism,’ he explains, ‘during interviews journalists hope that I mess up. One time they came and interviewed every person in the room but me, because the government had instructed them not to interview “bitter” people.’

Despite these scathing opinions, several small media organisations with limited government funding still operate as exceptions to the rule. Radio Pachamama is a good example of a station that has retained the trust of its listeners. Based in El Alto, it gained a reputation as a reliable news source during the protests known as the Gas Wars in 2003. The station provided a platform for the words and wishes of the people, not the government. Now, in light of a similar divergence of perspectives between state and people, Radio Pachamama continues to report and reflect on these issues. Rather than remaining in support of the government they once helped put into power, the station is openly addressing the communication gap between government and people and giving voices to the protesters once more.

In these recent weeks of unrest, protesters attempted to take over the offices of the state channel, Bolivia TV. Gisela Lopez, Minister of Communication, denounced the act as a violation of freedom of the press. Dr. Alex Chamán, on the other hand, who is a high-profile professor and supporter of UPEA, defends the attempt, saying that they were acting out of desperation given how the state media has misrepresented their movement. ‘The government curates a mudslinging campaign against us,’ he says. ‘At a certain point, one is compelled to deny their accusations. Although [the act] may not be completely justifiable, it is understandable...Evo Morales himself spent years fighting, in various ways, against the previous neoliberal government,’ Chamán adds. ‘This is a case where the steak does not remember that it was a cow.’

In 2003, protests arose against a law that would have allowed foreign investment in the country’s natural gas reserves. Although this year the protests have emerged in a different context, Flores believes there are several similarities. ‘The government has its own priorities that are neither education nor health,’ he explains. ‘The mixing-pot of the events of 2003 is beginning to re-emerge because the government is failing to fulfill its socialist promises.’

Chamán, however, has a different view of the situation. ‘2003 was a different,’ he says. ‘Bolivia was in a catastrophic situation, governed by a neoliberal government that took away our rights…with huge rates poverty and repression, a situation that moved the entire country to fight. Now, Bolivia is in a hugely improved situation,’ he adds, ‘but this does not mean it cannot be further improved.’ For Chamán, the protests are not meant to incite a revolution, but rather to communicate the need for further social improvement. In this case, the goal is for the university to reach an internationally competitive level of education.

The young protesters who are currently on the street didn’t experience the 2003 uprising, but they are fighting for the government's attention in the same way as their predecessors. For them, however, the movement is mainly a matter of university funding, while for those who remember the revolution of 2003, it is a symptom of what they consider is a larger issue: that the government is not delivering on its promises.

‘They have denounced us as vandals, but this has been a common way of dismissing protesters for many years now.’

‘Bolivia TV belongs to Bolivians not the Masistas!’ students reportedly shouted at the recent attempted takeover of the channel. Although it is not clear that the protesters are united in their opposition to the ruling party, it seems evident that the supporters of the movement feel a lack of representation. For them, in the fading afterglow of 2003, there is no excuse for the government to avoid engaging with the demands of the population.