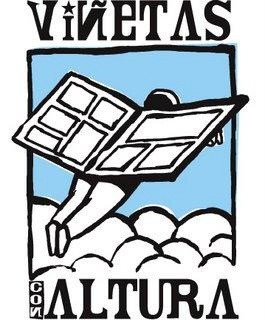 Although we arrived more than 30 minutes late to the MUSEF (Museo Nacional de Etnografía y Folklore), where Viñetas con Altura was being held, the conference had not yet begun. An eclectic selection of people mingled amongst the stands: aficionados who’d already come in previous years, amateurs who’d read about the events in the newspapers and showed up out of curiosity, and authors who wanted to attend conferences and workshops to perfect their art.

South American and European authors gave a range of workshops over the course of the week; the time when Bolivian comics were almost exclusively dedicated to political humour is far away. These days they produce a huge variety of comics and the festival exists to demonstrate this diversity: from autobiographic comics and Manga, to fantastical and horror genres. ‘Viñetas con Altura’ wants to bring it all to the public and help authors gain recognition. For the past eight years the association has been collaborating with foreign artists in order to help Bolivian authors export their work. Indeed, “before the festival, few people knew about Bolivian historietas outside our frontiers. Now they know Bolivian comic authors in Argentina, Peru and Chile. Few books are exported but there is an exchange. For instance, we publish authors in Bolivian magazines, not only Bolivian authors but also Argentine, Peruvian... and in Peru, the same author invites a Bolivian to take part in their magazine. So there is an exchange of talent,” explains Joaquin Cuevas, one of the main organisers.

However, although the festival has helped authors and their historietas achieve some visibility and fame through Latin America, only few Latin American authors manage to live from their art: most are forced to take another job. Surprisingly enough, Diego Jourdan, one of the few artists who lives from his creative output, does not consider himself an artist, as he works por encargo i.e. most of his work consists in putting someone else’s stories/ ideas into images, which also means adopting a style that is not his own.

Although Joaquin confirms this rather pessimistic account of the comic artist’s situation, he is satisfied with the success of ‘Viñetas con altura’. His awareness of the difficulties that these artists face make him believe even more firmly in the importance of promoting their works.