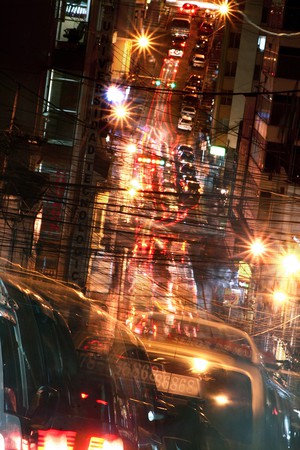 The streets of La Paz--especially during gridlocked rush hours--are hardly the most welcoming of places for pedestrians. In the mad crush of cars, taxis, minibuses, micros, motorbikes and now Puma Katari buses, making it alive to the next plaza can feel like a grand achievement. At times, you must dodge vehicles of all kinds and sizes in order to reach this rare collection of pedestrian safe zones.

The number of registered vehicles in Bolivia almost doubled in the span of only 6 years, going from 418,000 in 2002 to 821,000 in 2008. It is estimated that over 300,000 of these vehicles can be found in the relatively small, though extraordinarily dense urban area of La Paz. Both of these figures, however, overlook the fleet of unregistered vehicles in the country, with a large number of doctored documents allowing for these. The government of La Paz predicts that in 5 years there will not be enough physical room for all the cars to move through the city.

But the practical issues of congestion are just the tip of the iceberg when it comes to the problems caused by traffic. Not only do many people in La Paz--especially alteños--face a daily commute of over 4 hours, but 3 people die each week in the city due to traffic accidents. This figure presents a 240% increase in traffic-related deaths and injuries since 2000. Furthermore, there is also increasing concern in the city over the air pollution caused by traffic. La Paz, along with Santa Cruz and Cochabamba, holds some of the highest nitrogen dioxide levels in South America, according to a 2012 report by the Clean Air Institute.

In order to understand why car ownership has grown at such a fast pace here, it is important to examine what owning a car means to the average Bolivian in La Paz. For some, a car is absolutely necessary to their job. Some people, like Edwin Marquez, a 41-year-old Bolivian, have always lived in La Paz but work in a rural area. Other residents believe cars have gone from being a desired luxury to being perhaps too easily accessible.

Orlando, an 8-year-resident of La Paz, says that 'in the past [a car] meant a large investment...it changed your life'. Today, he says, it is not uncommon to see 3 or even 4 cars per family, due to the growing availability of cheaper, used Japanese models.

That said, owning a car in Bolivia may still say a lot about a person’s status--much like in the vast majority of developed and developing countries in the world. One employee at a car dealership in La Paz told BX that owning a car in the city is still a common aspiration; 'It’s about having status. Above everything else it’s an accomplishment, something you’ve conquered'.

In order to combat the rising levels of pollution and congestion caused by the growing number of vehicles on the streets, Bolivian President Evo Morales introduced a ban in 2008 on the importation of all cars older than 5 years. The goal was to limit the speed at which older Japanese models were entering the country. In Japan, owning an older car has become increasingly expensive due to strict environmental regulations. People tend to update their models fairly frequently, which is why a huge market developed in Bolivia for these cheap second-hand models.

But the import ban was not entirely successful. After 2008, cars continued to enter Bolivia under the guise of false documentation. The attempts to seize these contraband vehicles were also largely unfruitful and even led to violent conflict. In 2012, the chuteros (who are responsible for the illegal entry and modification of the cars) confronted the military in Challapata when police attempted to seize their vehicles.

Back in La Paz, road users protest for entirely different reasons in a city where traffic remains an intractable issue. Only two weeks ago, bus drivers blocked the streets of the Zona Sur to protest against la semaforización, a policy that introduced over 60 new traffic lights to the area. Julián Manzaneda, leader of the bus driver's union, told the news outlet Red Uno that the Mayor's office in La Paz fails to acknowledge the demands of his sector. Since the traffic lights are aimed at benefiting the city’s pedestrians, Manzaneda suggests that perhaps the City should look into ‘our need for more walkways' instead.

For now, according to Alvaro Mérida--an official in the department of mobility at the Mayor’s office--the priority in La Paz is 'to reduce the number of private journeys' across the city and encourage the use of public transport. One scheme already in place to achieve this goal is the road space rationing program implemented within the bounds of central La Paz. This program limits vehicle access to the city centre on particular days of the week, according to the vehicle’s license plate. In the near future, the Mayor’s office plans to tackle parking with a plan that 'will involve the construction of parking spaces at key points in the city'.

Bolivians remain sceptical, though, arguing that the City will be unable to make any truly effective changes without facing entirely reversing public backlash. The challenge for future leaders, it seems, will be to build consensus around the need for addressing these issues, harmonizing voices and interests that are as dissonant and diverse as they look when they’re sharing the streets of the city.