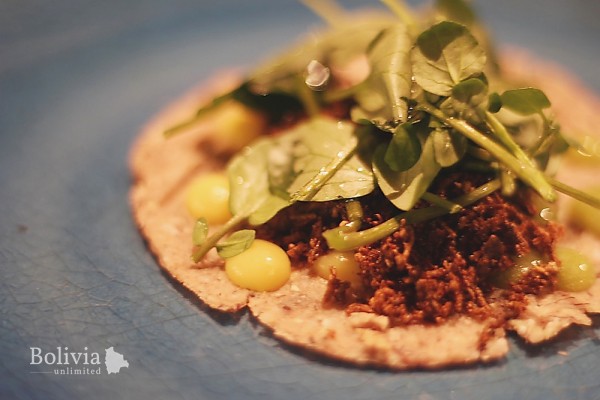 Bolivia goes back to its roots

As the recent fires in the Amazon make clear, we need to drastically reduce our red-meat consumption to combat the climate crisis. Our food choices have a direct, far-reaching impact; one of the key causes of the fires is the ‘slash-and-burn’ deforestation techniques used by cattle ranchers. But by reducing our red-meat intake, and generally being more ethical consumers, we can drastically reduce our global impact. Veganism, a lifestyle in which one does not use or eat any animal products, is one route towards this.

The Economist called 2019 ‘the year of the vegan,’ in which more people embraced the plant-based lifestyle. A 2016 Nielsen survey on food preferences discovered that vegetarians made up eight percent and vegans four percent of the population across Latin America. But what about Bolivia?

Bolivia is rich in natural products and cultivates an immense number of traditional grains (including quinoa, amaranth and cañahua) as well as boasting a large variety of beans and seeds.

From vegan fast food to café culture and fine dining, there is a growing number of vegan options in Bolivia to suit any preference and budget. For commercial (as well as ethical) reasons, more restaurants are now offering vegan dishes too; they don’t want to miss out on business. Even the supermarkets seem to be catching on and offering more vegan food alternatives, such as plant-based milk substitutes and tofu.

With an ever-increasing number of vegetarians and vegans in Bolivia, La Paz is a haven for vegan eats. Here are a few of the options for eating in and dining out. With so many on offer, which will you try?

Ali Pacha, which means ‘universe of plants’ in Aymara, offers a gourmet experience with its lunch and dinner tasting menus. 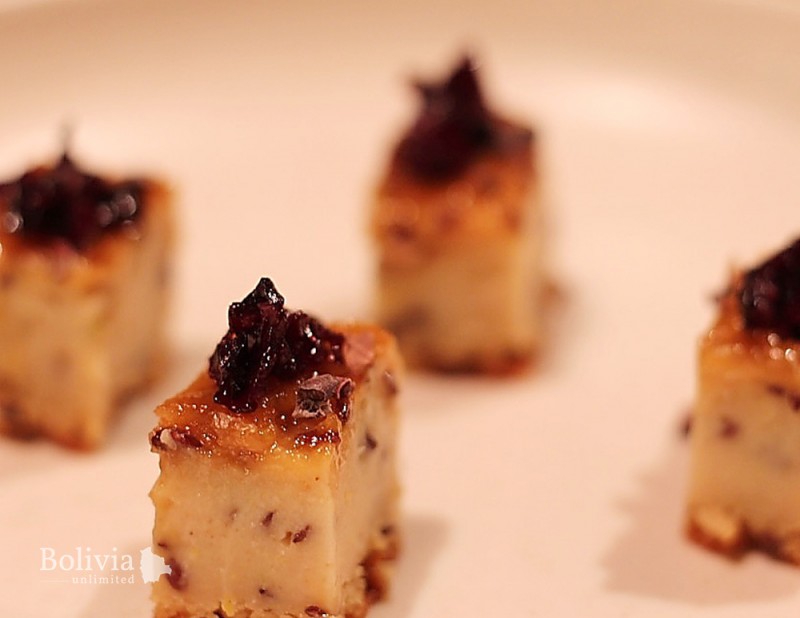 Sebastian Quiroga, the restaurant’s owner, founder and executive chef, studied French cuisine and patisserie in London. But it was in Copenhagen where he ‘saw the vegetable as the star of the dish itself rather than the meat.’ After turning vegan, moving back to La Paz and still working in the fine-dining industry, Quiroga decided to open his own fully vegan fine-dining establishment.

Deciding to open in the central business district of La Paz, far away from Zona Sur, where the newer trendy restaurants are normally located, Quiroga wanted to help revitalise the old neighbourhood. Ali Pacha is located in a restored house, decorated with recycled wood, furniture and even flour sacks for the soft furnishings. For Quiroga, sustainability is not just about food.

The offerings at Ali Pacha depend on what’s fresh and available. ‘We don’t reveal the menu until it is on the table,’ Quiroga says. ‘So every single dish is explained by the chefs, as well as the pairings of the wines for each course.’

Quiroga says that Ali Pacha’s blind tasting menu was designed because Bolivian people – famously preferring a meat-heavy diet – might be turned off by a menu featuring only vegetables. At the beginning, many customers came purely out of curiosity. The offerings change seasonally, making the most of Bolivian products in their prime, which Quiroga is extremely proud of and wants to showcase in new and creative ways.

Quiroga says that the message behind the food at Ali Pacha is to show Bolivians ‘how to be proud of our country and present the plant-based and vegan mindset as more digestible for a carnivore,’ to show ‘what Bolivian cuisine has to offer and how versatile it is.’ He wants to showcase the food to Bolivian people, open their minds and help them get ‘to know [their] city in a different way.’ He wants his customers to take away the memories of traditional fava beans or quinoa cooked in a completely different way.

‘Our ingredients represent Bolivia in general,’ Quiroga says. ‘Peanuts and peppers were actually discovered in Sucre and brought into the world. We are really proud to be using these plant-based products that are fully Bolivian.’

‘La Paz is opening and starting to bloom; there are so many possibilities here,’ Quiroga says. ‘I think [vegan cuisine] is just going to keep growing.’

Heart-warmingly named after a rescue dog close to owner Luisa Fernanda España Peñaranda’s heart, Lupito is more than just a restaurant; it is a community project founded on the principles of ‘ethics, love and respect for all species.’ 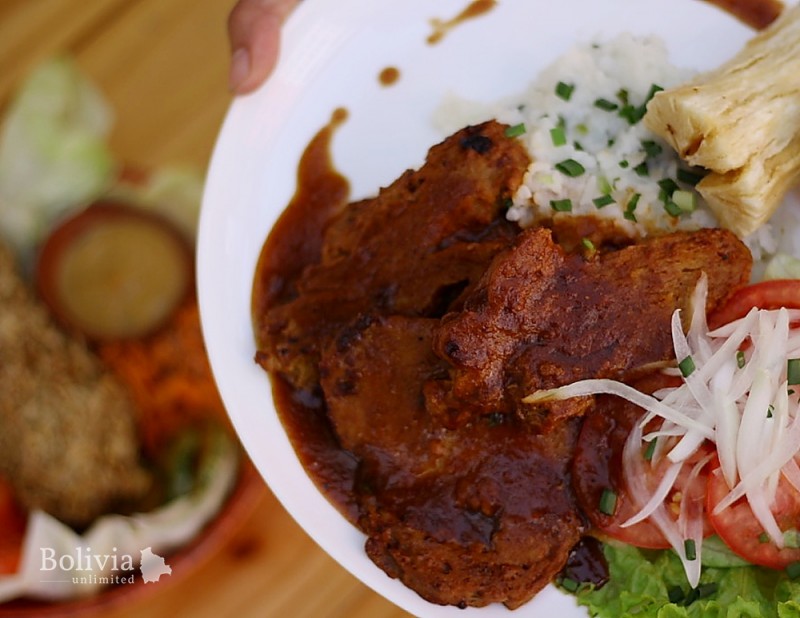 España says that Lupita focuses on ‘returning to the Bolivian ancestral customs, such as an abundance of long-forgotten grains’ to educate customers on the benefits that different foods possess and how they can live more consciously. Lupita’s relaxed setting encourages guests to ask questions and investigate the benefits of Bolivia’s natural products.

España and head chef Heydi Chávez fight the preconception that vegan food is expensive by providing a wide range of it which is both nutritious and exciting, making the most of local products found in the market. Each dish they create shows customers that vegan food doesn’t equal restriction.

The staff at Lupito is committed to serving customers up nutritious dishes that they will love and which will excite them. Each plate is a demonstration of the possibilities of vegan cuisine, all with a hint of Andean flavours and ‘creativity and passion at the heart of each creation.’

Lupito focuses on forging relationships with its customers, who are viewed more like friends. Some older customers and families now even have pensions set up with the restaurant, and they eat there daily at a discount.

España believes there is an increasing collective conscience in returning to past Bolivian cuisine, which is more plant-based, rich in grains and locally sourced than most contemporary foods, for health, environmental or animal-welfare reasons.

In the future, España is looking to grow and improve Lupita on all fronts and continue educating Bolivians on the benefits of Bolivia’s plant-based cuisine. ‘La Paz is on a positive path,’ she says. ‘We have planted the seed and are waiting for the impact to flourish.’

This vegetarian and vegan buffet allows diners to explore the variety and freedom of plant-based eating in a very relaxed setting; customers can eat what they want, as much as they want and in any order. 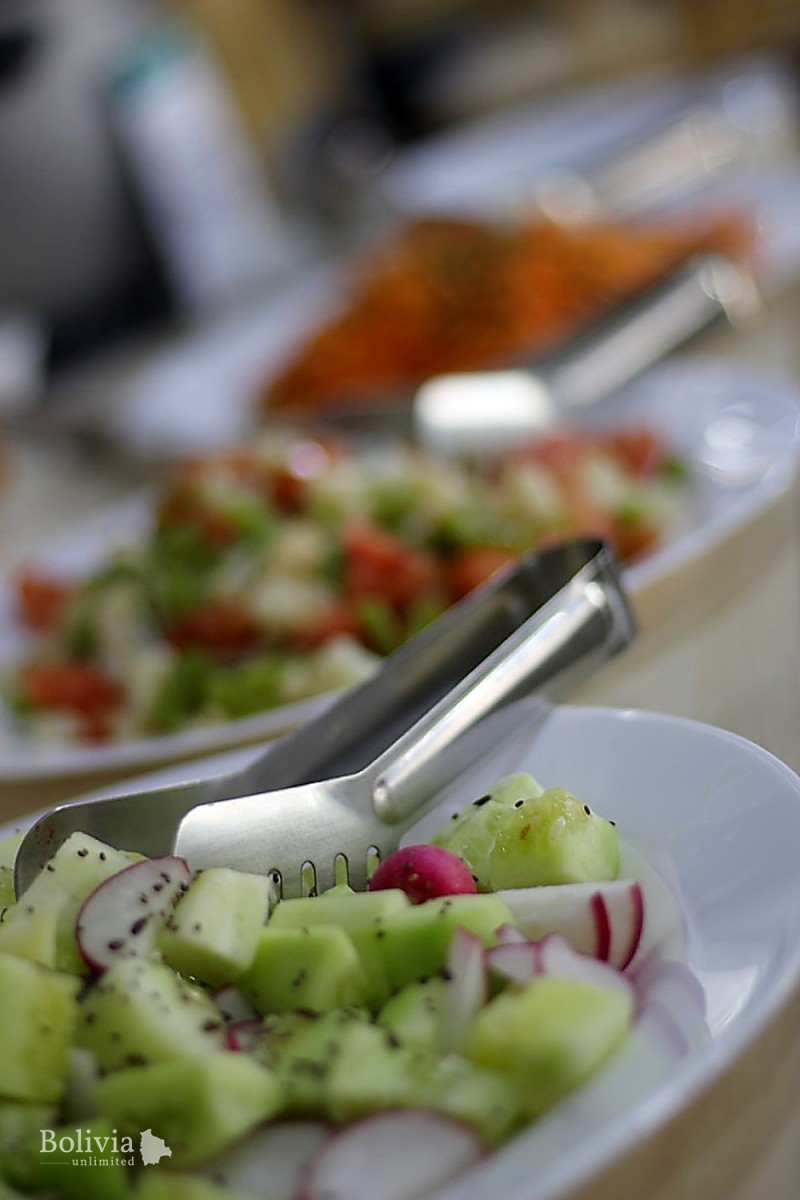 The large selection of hot food changes daily, so customers are always offered something new and exciting to try. Owner Mariana Terán wants to change the mindset that vegetarian and vegan food is boring and lacking nutrients. So, using locally sourced organic ingredients, Terán offers customers a variety of global cuisines, from Asia to Bolivia and everywhere in between.

The restaurant is attached to the La Huerta grocery store, where after enjoying their meal customers can shop and ‘take the mindset home with them,’ as Terán says.

Ninneth Geraldinne Echeverría León started out as just a worker at Café Vida, but in 2016, at only 21 years of age, she took over the business from her mentor, María Borda Kantuta. Initially, Echeverría was reluctant to change anything about the café at all. However, little by little, Café Vida has grown, flourished and expanded – with more plans to expand in the near future – into the haven it is today. 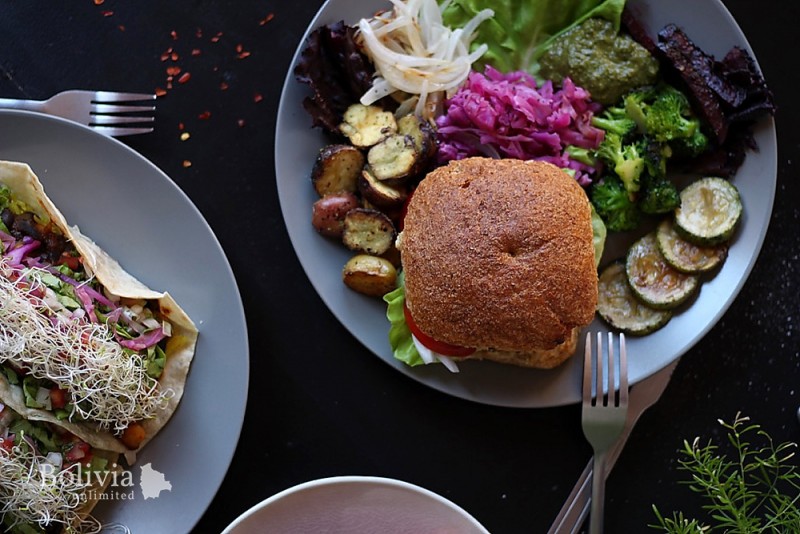 For Echeverría, Café Vida represents ‘an alternative place to eat,’ where everyone can share and enjoy and feel at home and make themselves comfortable. This couldn’t be more true given the sofa bed at the back of the café surrounded by fairy lights; it’s the perfect setting to relax after a nutritious lunch.

The café offers a variety of different plates, from smoothie bowls and snacks to burgers and creative sandwiches, all which aim to achieve nutritional balance. The most popular dish, according to Echeverría, is currently the Inca bowl, but she shared that her personal favourite is the vegan burrito.

Echeverría says that La Paz has witnessed an increased level of consciousness about the danger and impact of its current meat-heavy diet, from the number of people interested in learning about a vegan diet and the number of new vegan restaurants opening. More people are open to trying plant-based food, she says. She adds that the younger generation seems to be more driven by ethics regarding environmental and animal welfare, and the older generation is more concerned for health reasons.

Whatever their motive, many are turning to a plant-based diet, moving away from the pollo frito available on many street corners and once again incorporating more of Bolivia’s natural plant products such as yuca, vegetables, corn, quinoa and potatoes. Echeverría says that vegan food is delicious because each element of a dish has its own distinct taste and isn’t simply overpowered by meat. ‘There is a whole world of food to explore: spices, different combinations,’ she says. ‘You just have to be creative and practice.’

After hearing that the seitan at Aguacate was proclaimed by locals as the best in La Paz, my expectations were high as I travelled to the San Miguel neighbourhood in Zona Sur. 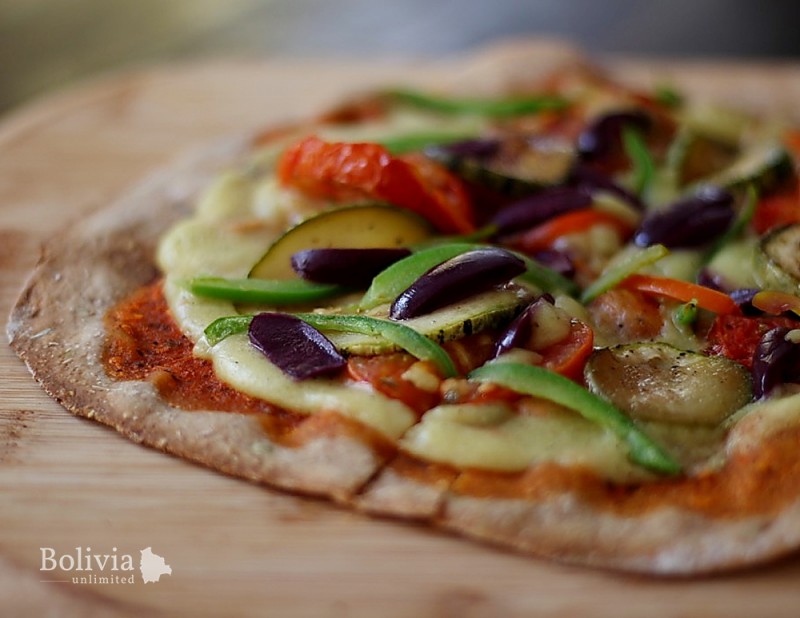 Originally founded in 2016 as a project advocating ethical eating and sustainability, Aguacate became a vegan haven in March 2019. Head chef Carla Rodriguez and owner Lucía Aliaga want to show what can be vegan, taking meaty favourites and things they liked to eat at home and ‘veganifiying them.’

This is where the taste and texture of the seitan comes to light; Aguacate’s meaty skewers, nuggets and sandwiches could fool even the most carnivorous customers.

Awareness of what ‘vegan’ actually means and that ‘it is not just a diet, but a lifestyle,’ as Aliaga says, has increased significantly in the last five years. Whilst delivering a nutritious twist on ‘vegan junk food’, Rodriguez and Aliaga take advantage of the numerous aspects of local and natural Bolivian products, one example being the yuca cheese on Aguacate’s pizzas which, like the majority of the food and drink here, is made in house from scratch. I’m usually wary of vegan cheese, but I think that its taste and texture (including its melting ability) were amazing.

Rodriguez and Aliaga are challenging the fixed ‘meat mindset, taking advantage of the opening which has recently exploded worldwide’, and promoting a vegan diet and more ethical lifestyle. ‘We want Bolivia to follow a different path, away from industrialised meat production,’ Aliaga says. The concept of sustainability is very important for Rodriguez and Aliaga, and Aguacate has no plastic on site and customers are encouraged to bring their own reusable takeout containers.

‘As Latinos, we can see the impacts of the [meat] industry,’ Aliaga says. ‘The destruction of the Amazon is geographically so close to us. We have a lot – we need to value it and find new ways of developing which allow us to maintain it.’ 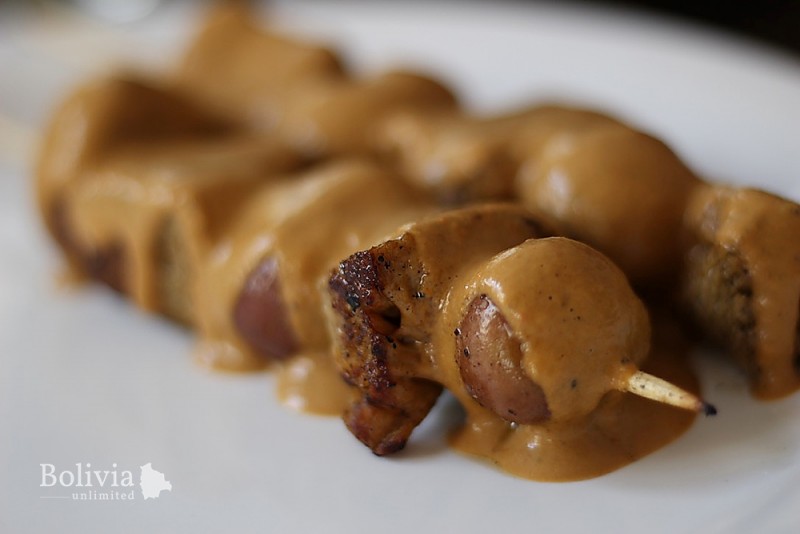 For the Home Cook: Tierra Viva

Paola Cespedes Inclan opened Tierra Viva, on Calle Victor Sanjinez near Plaza España in La Paz’s Sopocachi neighbourhood, to offer more vegan and vegetarian products to meet the ever-growing demand. She combined forces with a friend who wanted to offer products without gluten, meaning the shop offers healthy, low-sugar and natural products which are all vegetarian or vegan and gluten-free. 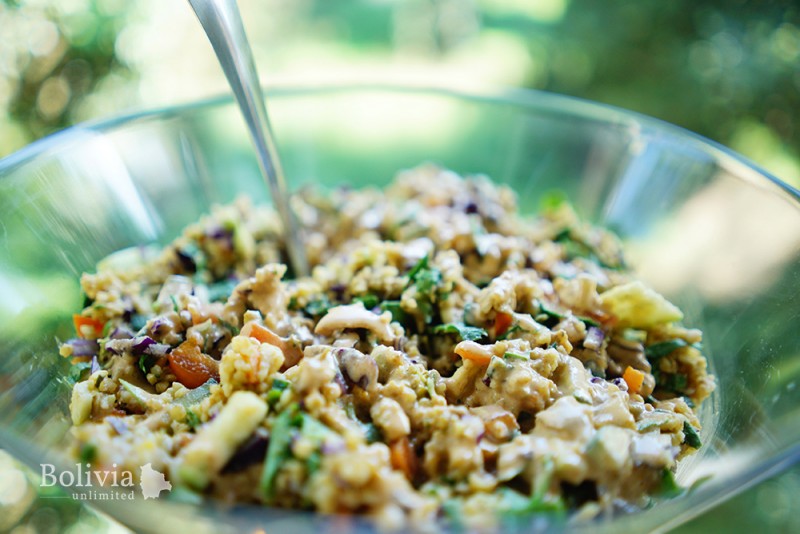 In the last two years, Cespedes has noticed a big increase in the number of vegans in La Paz, and people who are curious about the vegan lifestyle and come to her for nutritional advice. However, supermarkets do not carry many vegan or natural products, and what they do sell is usually expensive. Cespedes and Tierra Viva are countering this with accessible and locally sourced products.

‘There is an increasing level of consciousness regarding the planet, when it comes to many aspects of life, not just food,’ Cespedes says. ‘The youth, above all, they are leading the way.’ Additionally, she says there is ‘an increasing desire to reclaim the cultural customs of the country, to turn back to our local foods of each region, to turn back to the food of our past.’