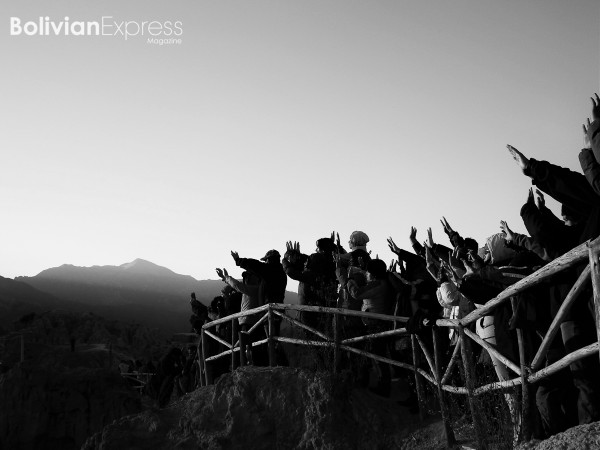 She lays out her coca leaves over page 10 of El Dia’s June issue seated by herself in La Paz’s entrance to Valle de La Luna. She’s donning a navy bonnet with a plum wool cardigan and a matching silk pollera to keep her snug from the 5 a.m. chill.

A Mario Bros. ringtone resonates from a Nokia 200 through Marta’s skirt pocket and cuts through the still silence of the barren valley. Her 18-year-old daughter is on the line.

‘I’ve been here since four o’clock’ in the morning preparing the coca, cinnamon and sugar for Pachamama,’ Marta tells her, laughing with excitement. As she smiles, the crow’s feet on her rustic tan skin become ever more prominent. She checks the time on her cell phone and concludes there is an hour-and-a-half left until sunrise.

Prompt and patient, Marta Diez is the first person to arrive at Valle de La Luna’s Aymara New Year festival. She is one of the 1.5 million Aymara people in Bolivia who celebrate the winter solstice on June  21st. Officially named the Nuevo Año Andino Amazónico y Chaco, the celebration became a national holiday in Bolivia in 2009. On this day the sun is at its farthest from the Earth, which marks the beginning of a new agricultural year. It is the shortest day and longest night of our solar cycle.

Born and raised in La Paz in an Aymara household, Marta is a part-time seamstress and part-time tienda owner in El Alto. Although she has celebrated the New Year in various places across Bolivia, including Potosí and the most famous site, Tiwanaku, for the past four years she has spent it at Valle De La Luna, her favourite location.

‘Tiwanaku is too commodified and cold for my taste,’ she says, as she continues to lay out her coca leaves on sheets of newspaper. ‘This location is right down the street from my house. There’s a lot of thought put in from those organizing the ceremony.’ Marta has brought several bags of cinnamon, sugar and coca leaves to share with those attending the ceremony.

‘The sugar and cinnamon I have here are to bring good health and good luck for your job and family. Pachamama is watching out for us,’ she says, pointing to the star-filled sky.

These elements are placed on an apxata, a ritual table covered with white tabletas, where coca leaves and natural elements accompany a dark-coloured llama fetus that represents the earth and its fertilization. The offerings on the table make up a mesa dulce and include fruit, coloured sweets, flower petals and aromatic woods of koa and palo santo. The fetus is wrapped in heaps of strings made out of wool. The items burned over the ritual table vary from celebration to celebration, but they usually represent  a house, a car, health and money.

Swarming about the dusty valley, the staff of Mallasa’s community City Hall fervently pace the event, making sure locals and tourists enjoy their time prior to the ceremony.

‘We are receiving el nuevo año andino amazónico with a traditional gift (huajta) to Pachamama,’ says José Eduardo Camper, deputy mayor of the Mallasa District, where the valley is located. ‘We’ve organized musical groups and we await neighbours and other communal organizations to attend this event we’ve planned for the past month.’

The song ‘Aymara’ resonates throughout the valley. Walter Quispe, the yatiri of the evening, makes his way to the front of the ceremonial table. Pacing around the llama and its body enveloped by gifts brought on by Marta, he begins to lightly drizzle the concoction with his tiny flask of alcohol. He lights the table. A booming flame ignites from below.

Locals and tourists pour in gradually at the gates of the Valley. Eager children and their parents make way up to the viewpoint looking over the purple haze of the 5:30 a.m. sky.

Quispe, who has been a yatiri for the past ten years, continues to perform the ceremony. Engaged and taken by the blazing red flames of the table, a stream of tears begins to roll down his cheeks. Marta and the two cholita friends who joined her, hold hands in a clasp, resting their heads on each other’s shoulders.

‘This is the one time we get to wholly express our culture. For us there’s a melancholic beauty to it,’ says Quispe, in a voice so soft it could put a child to sleep.

The sun is rising. The llama has turned to ashes. Over the hill, a bright yellow sun makes its way shining over the valley. Palms are raised to the sky and a new year has been officially marked.