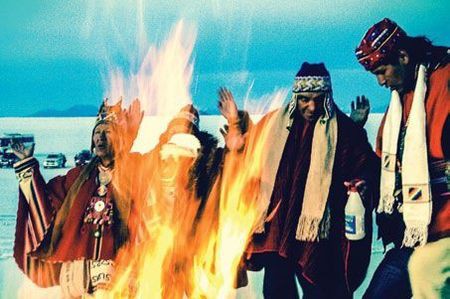 A celebration of identity and culture on the salt flats

Extending its reach beyond the sacred site of Tiwanaku, in 2013 the government has decided to hold further celebrations for the Aymara New Year in El Salar de Uyuni. In a move that transforms the touristic into sacred, tradition thus continues to be reinvented.

Blood stains the pearly, white ground of the Uyuni salt flats, flowing from the necks of two decapitated llamas. Coca leaves adorn the fur of the two, as they lie bound and gagged, fatally compromised in a sacrifice to la Pachamama (Mother Earth).

I haphazardly scramble up Isla Jithik’sa, a sharp, crumbly rock mass about the size of a carnival cruise ship. From the top, I have a bird’s eye view of a government-organized festival held in honor of Willakuti .

Rumour has it that President Evo Morales will be here. Upon leaving La Paz, it is still unclear if he would choose Uyuni over Tiwanaku for the New Year’s celebration. Traditionally, Tiwanaku has been the stage for this momentous occasion due to its archaeological status as a sacred site at the root of Andean culture.

Maybe he’ll be here. And if he shows up, maybe he’ll say a thing or two about the future of Bolivia’s national treasure, its lithium. Perhaps he’ll talk about international trade.

Over the salt flats, a dreamy pink horizon tints the sky. In the north, the sun rises, marking the beginning of the winter solstice. Music, dance and ritual follow.

Sunlight illuminates the Andean Mountains. An Aymaran priest lights a fire at the top of Isla Jithik’sa. The burning kindle is an offering to Tatainti. '¡Jallalla!' he says, and everyone follows.

Evo Morales does not show up, but his daughter Eva does. In keeping with an Aymara ritual, she pours alcohol onto the fur of the two llamas and takes a swig from the same bottle. Later, I walk up to her, kiss her cheek and shake her hand. She tells me Andean traditions can be preserved.

'Young people must come to events like these,’ she says. ‘They should share more of their lives with our indigenous people’.

Quickly, the mood turns overtly political. In a matter of seconds, the salt flats become a stage, a cultural platform representing Bolivia’s plurinational identity. As of 2009, the Bolivian constitution states the country is, 'founded in decolonization, without discrimination or exploitation'. Cultural rediscovery unifies the 36 indigenous communities in Bolivia that demand adequate representation.

I stare at a framed portrait of Tupac Amaru, the last Incan emperor before the Spanish colonized Bolivia, which lies at Villaroel’s feet.

Felix Cardenas, Vice Minister for Decolonization proclaims, 'we have been submissive to other traditions for a long time, but today is the Andean and Amazonian New Year. Thanks to our President we can keep moving forward toward better conditions in our country.'

In the distance, the national Bolivian flag blows softly in the wind next to the national Wiphala flag. Felix and Eva dance to the sound of Andean drums and panflutes. In the rich salt flats of Bolivia, a new agricultural year begins for the indigenous Aymara nation.