Up Before First Light 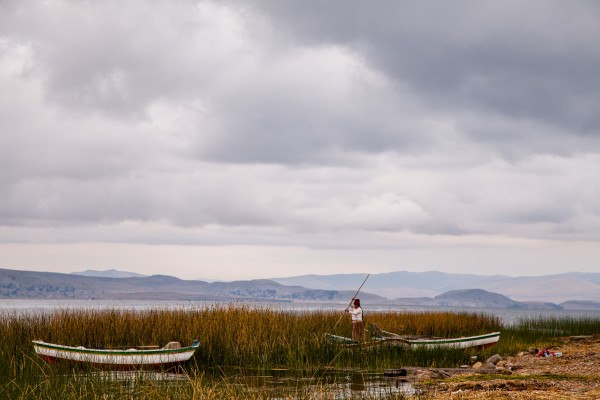 The sun has just risen, the sky is covered with a thin layer of clouds and Demetrio Maite Ramos is motioning for me to join him in his small rowing boat for the day’s fishing. Having emptied the boat of last night’s rainwater and cut back the totora reeds with a long knife-tipped stick in order to clear the way, we are ready to begin. Observing from the shore, my taxista is waiting patiently as we enter the lake.

The fisherfolk of Lake Titicaca are up before the sun, on the lake while the sky is still dark. For Ramos and his neighbours in the community of Sahuiña, a village near Copacabana, the workday begins around 5am, in order to provide the markets with a fresh supply of fish.

Each afternoon nets are put out, attached to floating plastic bottles. A day or two later the fishermen return and pull them out from the dark depths of the lake, revealing small fish such as ispi trapped in the net. Different nets have different-sized holes, each designed to catch a certain type of fish.

However, the most reliable source of income comes from trout, which are farmed in small netted enclosures, covered to protect them from greedy seagulls and wild storms which would otherwise release the trout into the lake. The netting has to be replaced approximately each month, as algae can build up and starve the fish of oxygen. Many of the small fish are fed to the trout after being blended with maize and flour.

Ramos has always been a fisherman, and tells me about the changes he has seen. ‘There aren’t many fish in the lake anymore’, he says, explaining that overfishing and climate change are partly responsible. Over the years the lake’s water has slightly warmed up due to climate change. As a result the water cannot hold as much dissolved oxygen, resulting in a decreased fish population. Both Bolivia and Peru have regulations to prevent overfishing, but they are not always respected.

‘It’s a loss for us,’ Ramos adds. He says that trout farms are now a more reliable source of income than free fishing. It means a shorter workday, leaving time to work on the land as well. For Ramos, afternoons are spent farming, and each of the 20 families in the village has a plot of land to grow potatoes, broad beans, maize and quinoa.

Pollution, which also affects Lake Titicaca’s fish population, is a complex problem with a variety of causes. These include industrial waste flowing in from the rivers, use of harmful pesticides and large quantities of mercury entering the lake, which originate from mining operations. Francisco Osorio, from the Institute of Ecology at the Universidad Mayor de San Andrés, explains that the pollution causes certain species of plant by the shore to grow much faster than others, reducing available light for other plants such as the totora reeds. These reeds provide an essential reproduction site for all the species of fish in the lake apart from trout which breed in rivers. ‘The natural coastal plants die, and so the reproductive habitat is lost’, Osorio explains. Recovering the lake, he says, is a long process which could take 30 years.

Litter is also a growing problem on the lake, much of it left by tourists and spread by the wind. This problem, however, is easier to tackle at a local level. Indeed, the community of Sahuiña cleans up the area each month, and all the village’s children are taught about the importance of not throwing litter on the ground.

For the community, the health of the lake is very important, and the people have a great respect for Pachamama, who keeps the balance of nature. Before the villagers begin to sow or fish, they always ask Pachamama for permission and make offerings of sweets and coca leaves.

As we row back towards the shore, the sun peeps out from behind the clouds, illuminating the beautiful fishing scene I have just experienced. I hope that in years to come this sun will light a healthy, non-polluted lake.

‘It’s a really beautiful lake’, Osorio says fondly, and as I look out over the shimmering waters, I would find it hard to disagree.

Thank you to our taxista Señor Javier Quispe Yavi, who took us to Sahuiña, and is available to provide minibus transport around Copacabana: 76251212 - 73550472 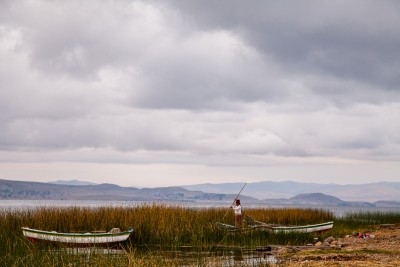