Unlove - When Love Has Lost Its LLajwa 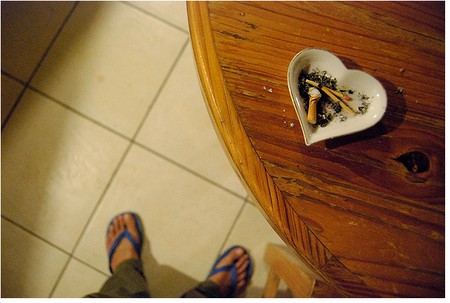 With Valentines Day around the corner, couples frolicking together in carnivalesque frenzy, hearts on sale at every street corner and love charms for sale to make your passionate crush fall in love with you, it's hard not to get swept away with love and its associated rites. Even President Evo Morales has declared that the next thousand years herald an era ‘of peace and love'. But let’s not get carried away in this pheromonic haze just yet, to truly understand love we must look at where it no longer exists; where pop that was once fizzy has now gone flat.

Although no official figures exist, according to the International Anglican Family Network (IAFN), 'a stunning 75% of marriages in Bolivia end in divorce, with 73% of these ending in the first two years of marriage'. The Network has responded to this by offering failing marriages counselling and support through the church in Bolivia. In fact, Anglicans are not the only ones getting worried about the current situation. On their part, the Bolivian Bible Society are employing their full strength to get into churches and supply pastors with the skills and resources to piece back together marriages that are near collapse.

While there’s some discrepancy over the exact divorce rate (at the lower end of the spectrum, the Coordinadora de la Mujer claims roughly half of marriages ends in divorce), figures are undoubtedly high by international standards. Even estimates for the US, where the divorce rate is infamously high, don’t exceed 60%. The Bolivian situation begs the obvious questions: why are rates so high, and what are the implications?

The IAFN have placed the reason of 'absence of social restraint', as the first cause of increasing divorce rates. In fact, they assert 'divorce is now an option to be considered, even a normal outcome' for any failing marriage. Another argument that is offered, though not directly by the IAFN, is that the apparent ease of divorce now offered by large-scale law firms is actually contributing to the higher divorce rate, and that the ease of divorce is actually causing more people to get divorces.

I spoke to Rigoberto Paredes, one of the top divorce lawyers in La Paz. We had a conversation at the plush offices of division of his law firm aptly marketed as ‘Divorcio Fácil’. It turns out that while it may be true that law firms make it 'simple and easy for the client', the divorce process really is a long, arduous and, most importantly, expensive process. The divorce procedure in Bolivia stands out as one of sheer bureaucracy, trapping unsuspecting victims into a legal battle, which can be as vicious as it is onerous. It can take anywhere from 8 months to 5 years, and at least 5,000 bolivianos for a divorce to become finalised. This would imply that divorce is almost exclusively the privilege of the wealthy, a fact that seemingly calls into question the IANF divorce statistics.

Indeed, there are other reasons to doubt claims by the Episcopal community, which states that a lack of morality in Bolivian society is responsible for an increase in divorce. While a large number of divorce claims are based on infidelity, it’s needful to examine other financial and economic reasons. Some examples I discovered include men being forced to leave their families to search for work in remote places, for example as an offshoot of the burgeoning oil or gas industry. As a result, if the man is absent from the household for two years or longer, the wife is within her rights to divorce her husband without even as much of a requirement as him signing the papers. Furthermore, the law firm had several cases in which a couple got divorced and yet continued to cohabit purely for economic reasons.

Even when infidelity is cited as a reason for divorce, as soon as one scratches beneath the surface it’s easy to see the situation is really not what it seems. 'Fraudulent evidence is a constant concern', Paredes told me, explaining that many of the individuals who claim for divorce on grounds of infidelity are simply doing so because that is the evidence 'easiest to fake'. In fact, fraudulent evidence doesn't even stop there. Many times, in order to protect his assets, the husband will ask his boss to fake a certificate of pay to claim that he is being paid substantially less than what he actually makes, thereby meaning he loses less in the divorce process.

In keeping with the times, the Rigoberto Paredes law firm have recognised these social and cultural changes. The web portal for Divorcio Fácil allows clients to follow their cases online, without the need of setting foot in the court. They also have agents on-hand to answer questions via chat, as well as a specialised group of psychologists to help through the process. Cynicism aside, Divorcio Fácil really does seem to make the whole thing as fácil as possible. That said, it was repeatedly stressed to me that the firm has a very strong code of ethics and they will absolutely never try to motivate someone to take a divorce, and will in fact do all they can to dissuade them if they think it appropriate. 'While we make it possible for people to attain an easy divorce, we absolutely do not motivate them to do so'.

It’s apparent the rise of specialised divorce law firms themselves cannot, on their own, explain the divorce figures. Saying that more people are getting divorced because there are more divorce lawyers is like saying more people are getting murdered because there are more criminal lawyers. These religious organisations' claims and explanations make little sense, and the figures they use to legitimise their campaigns are largely unfounded.

Referring to the above cited figures, Paredes adds that these religious organisations are only proving that they have a distorted view of the family by claiming that divorce is on the rise due to a denigration of morals and the establishment of specialised divorce law firms. What seems more probable is that couples, traditionally conservative in their outlook, are being swayed by the forces of modernity and globalisation, increasingly understanding the contractual aspect to their relationships as precisely that; a mutually consensual agreement that can be broken when its terms have been violated, or when it’s no longer in the mutual interest of both parties.