TURNING UP THE TEMPO 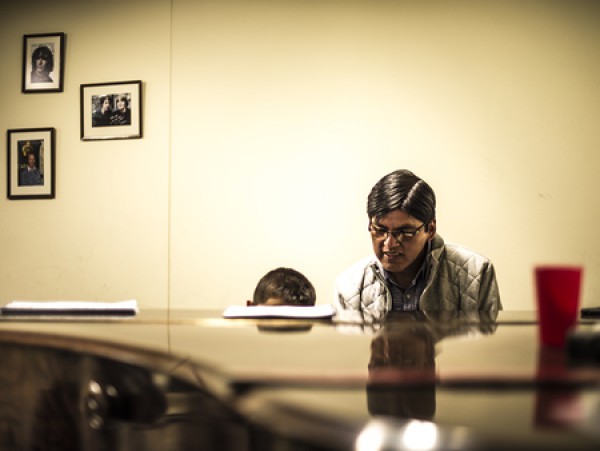 Even before the clarinet had reached his lips, I knew I was about to witness something special. It was his confident stride down the middle of the audience, his collected composure in those agonising few seconds of silence, and the assured smile he flashed the pianist when ready to begin. The music sang with sensitive expression and insightful character, controlled with a technical mastery indicative of years of experience. It appeared to provoke within him a movement so captivatingly fluid and contagiously energetic that I had to stop myself from swaying along for fear of colliding with the shoulder next to me.

His name is Lucas—a 16-year-old clarinetist and concert soloist for Bolivia Clásica School of Music.

Unique among Bolivian music institutions for its grand vision, Bolivia Clásica strives for artistic excellence. Pianist Ana-María Vera founded the school in 2011 after relocating from the United States to La Paz. Since then, it has endeavoured to empower young, eager students to use the language of music as a tool for personal and social transformation. The hope is that once these young Bolivians become professional musicians in their own right, the country—long overlooked on the global concert circuit—can become a destination of choice in the world of classical music.

A violin screeches next door as Armando Vera, brother of Ana-María and musical director of Bolivia Clásica, explains the circumstances that demanded its creation. ‘I worked for over ten years in various institutions and conservatoires in Bolivia, and in each one I encountered the same problem’, he says. ‘The people heading them have absolutely no interest in high-quality music education. Their only concern is the security of their own positions. Too much ambition from students or overseas musicians is seen only as a threat to stability.’

Dissatisfied, Armando chose to push the boundaries. Alongside teaching at the National Conservatory of Music in La Paz and the Instituto Eduardo Laredo in Cochabamba, he attempted to form his own elite orchestras. But it was only when he was able to freely engage with his own endeavours that he began to appreciate the damage that can be caused in the formative years of early childhood. ‘The kids from these institutions had not only technical flaws’, Armando says, ‘but psychological issues to do with low self-esteem.’

Bolivia Clásica began to experiment with a quartet system in an attempt to rebuild confidence, rehearsing and performing with just four musicians, as opposed to an orchestra which can include up to 100 members. The idea is that each player is vital: if one doesn't function, then the group doesn’t function. But when the group excels, each player is responsible. Armando asserts that they learn ‘not to hide but to lead . . . . It is quartet players that will form the building blocks of the orchestra.’

Bolivia is currently without the platform necessary to launch its young musicians into the professional world, so those who can must travel abroad. ‘Students would come up to me and beg for help to secure a scholarship’, Armando recollects, ‘because there's just nothing here for them.’ Lucas, as an example, is hoping to apply to a conservatoire in Philadelphia, and has already spent two summers studying in the United States. However, leaving Bolivia just isn’t financially viable for the vast majority. The answer then? Start to bring the classical music world here to La Paz.

Through Bolivia Clásica, professionally renowned musicians travel to Bolivia to work with the students and their teachers. Their major event is the biannual festival, which most recently welcomed internationally acclaimed violinist Jamie Laerdo to the modest venues of La Paz. But smaller projects are also running continuously. It was, for example, a one-week exchange that brought Kevin Schaffter, an American clarinetist and founder of the charity MusAid, to the stage alongside Lucas.

MusAid was created in order to enhance the capacity of music programs in underresourced parts of the world, ‘so Bolivia Clásica is the perfect match’, Kevin explains. ‘Their whole philosophy is based on building local capacity here in Bolivia, and ours is to give them the tools necessary for this self-sustainability.’ In 2016, Kevin hopes to return to La Paz with seven teachers and a luthier to conduct a 12-day teacher-training workshop.

I ask Lucas what it was like to rehearse and perform with Kevin. ‘He saved my life!’ Lucas enthusiastically exclaims with beaming eyes and a wide smile. Confused, I ask him to expand a little. Lucas explains that his greatest fear before any concert is the dreaded prospect of a faulty reed—‘He gave me two whole boxes! He really saved my life!’

But there's little doubt that this exchange is in every sense mutual. In return for imparting their skills and knowledge, visiting musicians are gifted the inspiration of Bolivia’s determined youth. The Bolivia Clásica website boasts a whole host of glowing testimonies. English cellist Guy Johnston highlighted the spirit of the students as a ‘reminder of what it is to fall in love with music again’. Similarly, Matthew Hunt, who worked with Lucas during a 2012 festival, said that he had ‘never seen so much raw energy, imagination and passion’.

With such potential, I probe as to what's next. ‘I used to listen to how a clarinetist played with an orchestra behind and wondered what that sensation would feel like’, Lucas remembers. ‘Now I know that this is how I want to make a living, playing all over the world.’ As for Bolivia Clásica, current discussions with the Ministry of Education suggest the promise of schools in remote rural areas, whilst ultimately the hope is to expand into other creative arts.

‘My sister and I have always thought big’, jokes Armando. In my opinion, it’s that very quality that is to be praised above all else. For Bolivia, Bolivia Clásica enhances its distinct international artistic identity; for aspiring young musicians, it is a source of hope and empowerment.