True Bolivianite: The Story of Ametrine 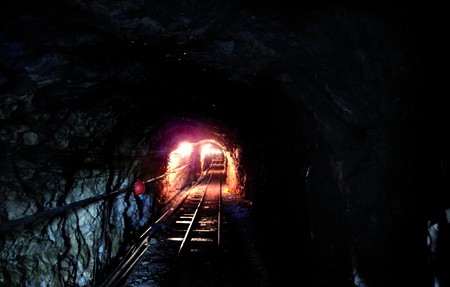 To reach the AnahI mine, one must trace the gems’ voyage in reverse, up the Paraguay River from Puerto Quijarro, a small, dusty town in the extreme east of Bolivia

Ametrine, a purple-and-yellow blendof amethyst and citrine semi preciousgems, is known as bolivianite inside of Bolivia. For years, it was thought to be available from various mines inthe eastern Bolivia and parts of Brazil.Rumor even had it that gemologists had perfected a method of synthesizing ametrine in a laboratory. But these speculations obscured the truth, namely that the Bolivian military had been illegally extracting the gem from a single mine in the deep wilderness near the Brazilian border. The stones were smuggled into Brazil and cut, polished, and sold, their proven ance obfuscated to circumvent Brazilian import duties and hide the Bolivian military’s plundering of Bolivia’s natural resources. Then, in late1989, Bolivian law changed and the government granted a concessionto the Santa Cruz–based Minerales yMetales del Oriente (M&M) companyto legally mine the gems. Founded by Ramiro Rivero, a businessman from La Paz, M&M now has exclusive rights to the Anahí mine near the border of Brazil in the vast Pantanal, one the world’s largest wetlands.

A quirky product of molten metaland water, combined with thousands of years of heat and radiation exposure, these gems have been sitting underground for millennia. Accordingto legend, about 400 year sago the local Ayoreos tribe gave the mine as a dowry to a passing conquistador who married the tribal chief’s daughter. Her name was Anahí. But the conquistador was more interested in finding El Dorado,and, depending on whom you ask,he either left the mine untouched o rwas driven away by the Ayoreos. We do not know what happened to the mine’s namesake, the Indian princes sAnahí, although some versions of the story say she was killed to prevent her from leaving with the conquistador.

M&M’s processing facilities sit in a large industrial park outside of central Santa Cruz. Inside, dozens of workers busy themselves in front of workstations, first measuring and grading rough clusters of the gem, then grinding them down into gemstones and separating them into colour piles. Skilled gem cutters then cut and polish the stones under magnifying glasses into trapezoid, emerald, and baguette shapes before they’re shipped off to retail locations. Rivero, a short but sharply dressed man in his early 60s, has his office just off of M&M’s work floor. In it, various gems are displayed conspicuously: rough amethyst gemstone clusters weighing tens of kilograms are arranged on the floor, while his desk is covered with a scattering of cut gems—purple amethyst, yellow citrine, and the coveted ametrine. When M&M was granted the mining concession in 1989, Rivero explains, the market was flooded with cheap ametrine, much of it poorly cut. Rivero decided to change how the stone was provided. “We like to produce the least amount possible,” he says, “and give as much added value as possible, with the idea of producing quality.” To that end, M&M created its combined offices and production facilities in Santa Cruz. It’s the exclusive distributor of naturally produced commercial ametrine in the world— and the source of much amethyst. (Ametrine can occasionally be found in other locations in Brazil, but Anahí is acknowledged as the only commercially viable operation worldwide.) With no longer any need to fudge the provenance of the stones, and since M&M has a virtual monopoly on ametrine production, local markets near the Brazilian-Bolivian border dwindled and eventually were shuttered.

In order to boost ametrine’s value and reputation—which suffered during its illegal-mining days due to rumors that its synthetic version was basically indistinguishable from its naturally occurring form—M&M regularly hosts gemologists and geochemists, who have confirmed that the synthetics lack a certain quality that’s inherent in the naturally produced variety. “When you talk about quality gems,” Rivero says, “there are two issues: depth of color and brilliance. The Russians [who synthesized ametrine] obtained great depth in purple and yellow. What they don’t have is the brilliance, which nature gives the stones. It’s a plastic appearance. I wouldn’t even call it jewelry.”

To reach the Anahí mine, one must trace the gems’ voyage in reverse, up the Paraguay River from Puerto Quijarro, a small, dusty town in the extreme east of Bolivia, through the vastness of the Bolivian and Brazilian Pantanal to the far-flung Mandiolé Lagoon. Vast tracks of water lilies clog the slow-moving river while urubus— black vultures with light-colored head plumes—soar overhead. Crocodiles snap their jaws at boats speeding by. Mennonite soybean farms, cut out of the dense vegetation, come onto view and then disappear around the river’s innumerable horseshoe bends. From Mandiolé Lagoon, it’s a twoand- a-half-hour ride through an insect- filled forest up a narrow, muddy road. Once guests finally arrive at the mining camp, M&M’s junior engineer, Gonzalo Gonzales, shows guests the spartan accommodations. Miners relax in the dining hall; many of them are from Potosí, where the mining vocation goes back generations. M&M frequently hires workers from there because they already have a mastery—and lack of fear—of the mining profession.

The mine’s entrance is located up a steep slope from the camp, at the end of a path that is littered with cast-off low-grade gems from belowground. Purple stones crunch under feet in the dense brush; quartz and citrine stones are mixed in, forming a colorful semi-precious path to the mine. Large clusters of amethyst are strewn about as the earth offers up a bounty of purple treasure. The mine’s entrance is a horizontal shaft set in a crumbling rock wall. Stuffy air greets visitors, and bats flitter about deep in the hole. “They live here,” Gonzales explains. He tells his guests to don hardhats and gloves before going any further. “Watch your step. It gets very slippery in here.”

The Anahí mine extends 80 meters underground. It isn’t particularly deep, since the gem lode is near the surface. This is fortunate, Gonzalo explains, because the region receives so much rain that the lower levels of the mine are frequently flooded and inaccessible. Gonzalo shines his flashlight down into a vertical shaft. “This goes all the way to the bottom,” he says. “But as you can see, it’s flooded with water.” Nearby, a wooden scaffold is decorated with ribbons and surrounded by cigarettes, coca leaves, and bottles of alcohol. It’s an offering to El Tio, or “the Uncle,” who is the spirit of the mine. Miners in Bolivia traditionally leave offerings to El Tio, to appease him so that he doesn’t claim many lives.

About 100 meters into the mine, a wooden ladder extends into a dark hole in the floor. Gonzalo becomes animated and explains that a gem vault sits only 20 meters below. After giving instructions to his guests to follow, Gonzalo climbs down. The guests follow him down the muddy ladder, a seemingly endless climb in the pitch dark. With every meter farther down, the temperature increases; water drips down and mud scrapes off boots, making the ladder dangerously slick. Gradually, though, the light from Gonzalo’s torch gains brightness, until he’s visible in a low and narrow tunnel. He shines his lamp into a refrigerator-sized vault cut into the side of the shaft, and a deep purple hue reflects back out. Hundreds of fist-sized gem-quality stone clusters project from the vault wall. Deep and light purple and yellow gems glisten in the darkness.

Miners pry the large stones out of the various vaults in which the stones are found. The tunnels in the side of the hill follow the lode of gems; miners must dig exploratory shafts to find where the gems extend, then widen the holes and reinforce them with timber so that they can prise one cluster at a time from the clutches of the earth. They then carry the clusters outside and place them in metal carts, which are wheeled to the facilities back at the camp. There, a young man washes and grades the rough gems in an outdoor workshop. The first of many gem graders, he dumps a cart of gems onto a wire mesh platform, sprays them down with a high-pressure hose, and quickly separates the good from the bad. Then, with a well-practiced technique, he gathers the good gems in a chute and dumps them into a bag. The bag joins dozens more just like it, to be eventually shipped down the river to Puerto Quijarro and then the M&M production facilities in Santa Cruz. There they’ll be cut and polished; then, in weeks or months, they’ll be in showrooms, in Santa Cruz or Brazil, possibly China, India, or the United States, a two-tone purple-and-yellow treasure snatched from the depths of the Bolivian wetlands, a product of nature, myth, and back-breaking labor.