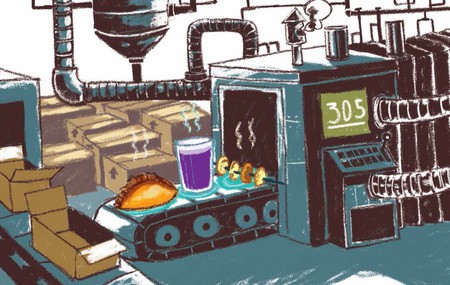 Coming Soon to a Food Court Near You!

Reflecting on traditional Bolivian cuisine, there are a few staples that immediately come to mind. The plato paceño features the unlikely combination of corn, giant lima beans, potato and fried cheese. Then there’s the iconic salteña: a perfectly baked pastry filled with a savory blend of meat, vegetables and a slightly spicy sauce. And of course the silpancho, a hefty platter layered with rice, potatoes, meat, egg and topped with salsa. What unites these dishes, and also sets them apart from others, is the fact they are all based on traditional recipes, a quality which has enabled them to be passed down for generations.

While these foods have survived the passage of time largely unchanged, what does continue to change is the market in which they compete. Away from traditional eateries, demand for fast food in Bolivia continues to escalate, as evidenced by the ever-growing presence of Burger King and KFC franchises. But fast food chains are no longer just selling burgers and fried chicken. Many local initiatives have positioned themselves in this segment, mass producing treats traditionally only found in market stalls and home kitchens. Fast food establishments offering native dishes have sprouted up in shopping malls across the country, and chains are becoming established by opening up outlets on street corners everywhere. Giants in the making include Silpich’s, Casa del Camba Express, Api Happy, La Quinta, and Wistupiku.

It was a sunny afternoon in La Paz when I decided to stroll into Api Happy, a restaurant located near the Monoblock that specialises in the rapid delivery of traditional Bolivian food from the highlands. The place was highly recommended to me and I’d even heard rumours that the woman who owns the restaurant intends to open franchises outside of Bolivia, thus making it the first Bolivian fast food company to go international.

The interior was, to put it frankly, basic (think mall food court meets high school cafeteria). I gandered upon the menu only to realise I was looking at pictures of unfamiliar foods in combinations I’d have never before imagined. I had no idea what to order.

So I decided to employ a trick I devised long ago for culinary predicaments such as the one I was facing: I ask what the most popular dish is, nod with great interest as the pearls of wisdom are bestowed unto me, pretend to ponder my way through a momentary bout of indecisiveness, and finally order every suggested item. In this case it was the plato paceño, which in hindsight was a predictable recommendation. It is, after all, the city’s signature dish.

I took a seat at a table and decided to pass the time by flipping through an Api Happy leaflet I picked up on my way in. I learned that Api Happy has four franchises throughout Bolivia, as well as a few facts about their ‘healthy’ menu options. For example, the company uses whole grain flour for its pastries, which they claim assists in the prevention of diabetes and obesity. I glanced over to see a cook deep-frying one of these cheese-stuffed whole grain pastries, all the time wondering how many people actually buy into this claim.

It was about 11 am. The restaurant wasn’t particularly busy, nor particularly dead. Most diners were eating the plato placeño, or presumably fighting off diabetes with one of these fried pastries. Not even a few minutes passed by before I joined in with my own plato paceño; my second one this week. I didn’t notice a significant difference in this dish from the homemade version I had a few days earlier. In this case, flavour and quality were not compromised for the sake of a quick delivery.

I was, however, able to get the inside scoop on another popular Bolivian fast food franchise: Pollos Panchita. Originally a small fried chicken vendor operated by a married couple in Cochabamba, the operation has since grown to operate in four locations across Bolivia. It has also added a second menu under the name ‘Llajta,’ which includes a variety of traditional Bolivian favorites.

I arrived to the El Prado Panchita to meet with Sergio, who has managed this location for six years. A hands-on supervisor, Sergio was hard at work mopping the floor when I asked an employee to see the manager. I liked him immediately.

I had recently read that Francesca Dominguez, the owner of Pollos Panchita, has always placed great importance on purchasing all raw materials from domestic suppliers. I asked Sergio about this, and he told me that all their supplies and ingredients are shipped from Cochabamba. I then asked Sergio if the product arrives frozen and pre-made, as it commonly does with fast food establishments in the United States. He told me no. Aside from condiments, everything is prepared fresh each morning. Fresh fast food—now that’s a new concept!

But in Bolivia this makes sense. Cochabamba is, after all, the agriculture and livestock farming centre of Bolivia, so ingredients are commonly sourced from this region. And materials travel only roughly 400 kilometers—a distance which pales in comparison to the thousands of kilometers ingredients must travel within the United States. Two other Bolivian fast food locations I visited also said that they source their food domestically, and sometimes even locally. Such a supply chain would be impossible for a big Western chain such as McDonald’s to sustain, considering that these companies source from many locations and therefore must rely heavily on preservatives, processing and freezing.

But what about consistency and timeliness? Nobody likes a McNugget that isn’t identical to its box mate, and Bolivian fast food is no exception. The key to fast food is being able to provide the exact same product, every time, at every franchise where it’s sold—and fast. Sergio said that thanks to Pollos Panchita’s ability to reinvent the preparation process, speed and consistency are ensured without a hitch. But what role do GMOs play in Bolivia’s fast food?

As it turns out, not a very big one. Evo Morales’s administration has recently passed the ‘Law of Mother Earth and Integral Development for Living Well’, which bans the introduction, production, use and release of genetically modified seeds in Bolivia. There are certain loopholes, such as the allowance of transgenic varieties for non-native crops. When it comes to native crops, however, GMOs are strictly prohibited. Considering that traditional recipes are based on the use of native ingredients, the likeliness of encountering GMOs is slim.

As far as livestock is concerned, factory farming is not as pervasive in Bolivia as it is in Western nations. Rather, livestock farming, which follow the age-old traditional model, is free range by default.

According to Katrien Van’t Hooft, who studies Bolivian farming methods, ‘Animal raising is embedded in Andean cultural values, such as solidarity and reciprocity, community organisation and respect for Pachamama—or Mother Earth. Rural families perform, therefore, numerous rituals and festivals related to livestock throughout the agricultural cycle. The subject of livestock rearing by families is also closely connected to those of biodiversity, environment, gender, poverty and migration’. For these reasons, it has been difficult to move towards the industrialization of livestock keeping. It appears locally sourced meat will continue to be free range for quite some time to come.

But how do street vendors feel about this latest development of traditional fast food? Do they feel threatened by this growing form of competition? I’ve noticed an abundance of salteña franchises throughout the city; surely the small fish must be upset by the growing amount of new sharks in the sea. I decide to ask a street vendor, a young woman supervising a salteñería, about her thoughts on this. Surprisingly, she doesn’t appear too concerned by it. She informs me that she has regulars who return faithfully each day who purchase her salteñas until she sells out. And she sells out every day.

Interestingly enough, Bolivians don’t seem to mind the competition, or appear to even view it as such. As long as they get by, that’s all that matters. Franchises don’t need to worry about receiving any heat from these small vendors—at least not for now.
It appears Bolivian franchises serving up platos paceños and salteñas are here to stay. And while these restaurants may not yet compete or operate on same level as that of American fast food heavyweights, they certainly have a hold, and understanding, of a niche that could enable them to grow to that level. As they continue improving upon and developing new processes and new technologies, there’s a good chance we could be seeing our first traditional Bolivian fast food franchise outside of Bolivia very soon. So don’t be too surprised if you see salteñas at your mall food court within the next few years!