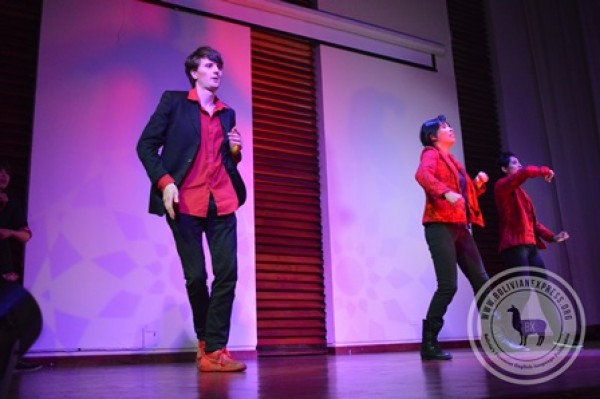 The Bolivian Cult of K-Pop Revisited

Back in 2014, I wrote about and investigated the curiously popular Korean pop scene in Bolivia for BX41. I spent time with a dance troupe called Diamond Girls and interviewed a radio expert in an attempt to get my head around how this niche, artificial and – crucially – Korean genre had permeated the millennial consciousness in La Paz so successfully. My conclusions were: marketing, sentimentality and idolism. But I never quite reconciled with a cultural import that had no basis in Bolivian language or lifestyle, and that had even led to extreme examples of paceños undergoing cosmetic surgery to appear more like their K-pop idols.

Three years on, I decided to go back. And to go big. In an attempt to understand this genre and its popularity in La Paz, I would have to become a Bolivian K-pop star. 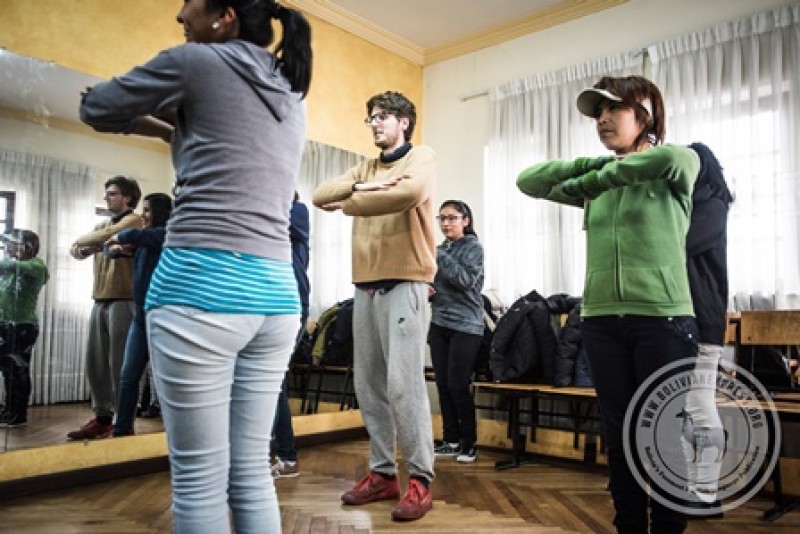 My transition’s enablers came in the form of María Isabel Huanca Azurduy and her team at K-SHIN who, perhaps misguidedly, agreed for me to perform as the halftime act in the 2017 K-pop World Festival Bolivia at the Palacio de Comunicaciones along La Paz’s main avenue, El Prado. More excitingly still, I was to become the fifth member of an all-female dance group – the wonderfully patient 501% Double S, whose name is a twist on SS501, one of the casualties of my 2014 vendetta, and the masterminds behind ‘Love Like This’, the song and routine we would be learning.

My only previous foray into dance training was when a male friend and I, despairing over our fruitless nightclub experiences, decided to shed all self-respect and learn the charleston in my university kitchen. I was not so much a fish out of water as a coy carp trying to rewire a plug socket. Yet, I was determined to dive into K-popping.

Our group’s first rehearsal was in a mirrored studio at Academia Artistik on Avenida Arce, where Alexis Anahi Castillo Rodríguez was tasked with the herculean objective of leading my training. Her purple hoodie reading ‘Wild Card’ seemed painfully apt. Progress, inevitably, was slow. The delay on my moves compared to the rest of the group was reminiscent of the lag on a transatlantic FaceTime courtesy of GPRS internet.

I was not so much a fish out of water as a coy carp trying to rewire a plug socket.

In our initial meeting, Isabel had, incredibly, agreed to afford me a solo vocal performance as well. My rendition of Kim Hyung-jun’s ‘Sorry I’m Sorry’ was set to be something of an apologetic homage to the man himself who, three years ago, had borne the brunt of my sardonic criticism, and had been the focal point of an excruciating cultural faux-pas when, arriving for a photoshoot with notorious ‘Junus’ fans Diamond Girls, it transpired that the images on my homemade placard featured Kim Hyun-joong; the star’s arch-nemesis, no less. I blame Google. As it turned out, my attempt at learning the Korean lyrics to Kim’s song looked certain to lead to an international incident. Best, we decided, that I stuck to dancing. 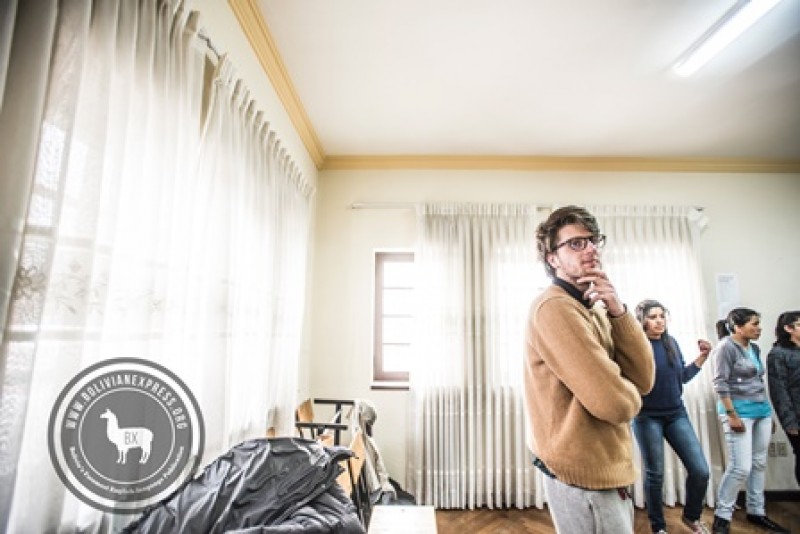 Our next – and final – two rehearsals, held in the all-too-public Plaza Bolivia, threw up no shortage of embarrassment, a variety of unwanted photographs, yet a surprising amount of improvement. One moment of panic came when I asked the group how long they had been dancing K-pop. Their answer – five years – made my four days look a tad on the under-invested side.

And so, all too soon, K-Day arrived. I had taken great solace from the words of Neil Jacobsen, an executive of the powerful Interscope Records, who ranks the qualities of a K-pop idol thus: ‘First, beauty. Second, graciousness and humility. Third, dancing. Fourth, vocal.’ Having very publicly failed at requirements three and four, it was time to invest in the first two. 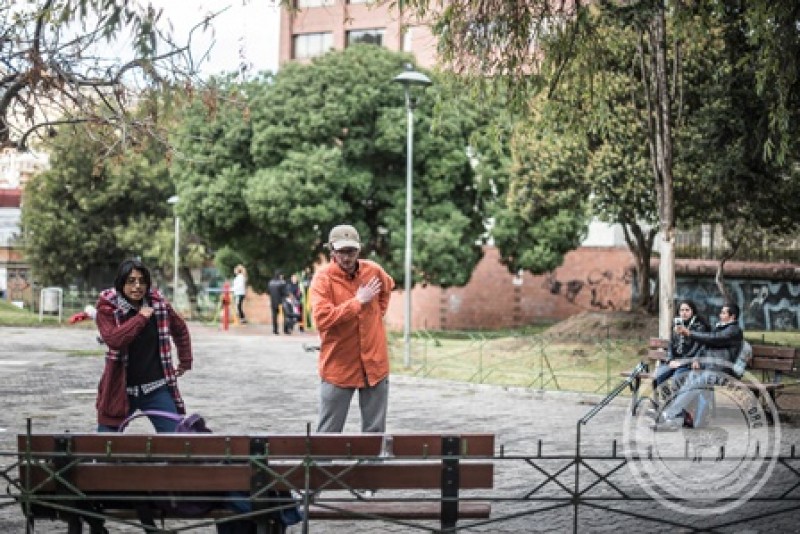 After guru Alexis deemed that linen and paisley weren’t sartorially Korean enough, on her instructions I was dressed somewhat akin to a once-popular children’s party magician now bumped down the pecking order after an ‘incident’ with one of the mothers. The aforementioned Kim Hyung-jun, who incidentally has just signed up to the South Korean police force, clearly has a strong sense of justice, but an even stronger hairstyle.

So, borrowing his defining characteristic, and with the aid of an industrial quantity of VO5, I headed to the venue with an electrified mop protruding from my scalp. Beauty? Check. In terms of graciousness and humility, it was very clear that I had absolutely no right not to display either. So, out of unconscious obligation, I was resplendent in both.

Half an hour before kick-off, my nerves were done no favour by a line of expectant spectators stretching and weaving, literally, around the block. Paceño K-poppers, I discovered, had multiplied in the past three years as prolifically as myxomatosis in the rabbit community of South East England.

The first half of this wonderfully slick competition went all too quickly and, before I either knew it or was ready, it was time to perform.

The experience was a blur – partly thanks to my adrenaline, and partly due to the dizzying decibel levels in the auditorium. One particular jacket-flick I attempted brought about screaming until now only heard at a Justin Bieber concert. There was also a very hairy moment post-dance when, in an impromptu on-stage interview, I was asked to name my favourite K-pop artists. Racking my brains to remember more than one, I was forced into an integrity-compromising spiel about the merits of Kim Hyung-jun. Mercifully, the crowd agreed. 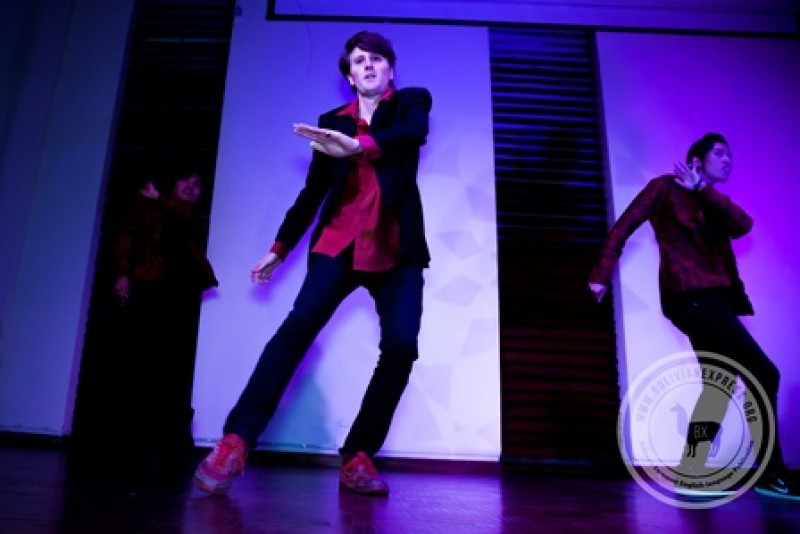 My performance, unexpectedly to say the least, came with a literal five minutes of fame: fan photos were not on my K-pop bucket list, yet somehow I was swamped – relatively – in the moments after I came off stage. At the time of writing, I’ve had to retreat to a quiet café to escape my fans.

At the time of writing, I’ve had to retreat to a quiet café to escape my fan.

Three years ago, I concluded that K-pop seemed still to represent a taboo interest in Bolivia, but that Hallyu – the term used to describe the tsunami of South Korean culture that permeated the global pop scene in the early noughties – could prove to be a defining shaper of Bolivia’s horizons. Never, though, did I consider that it might shape mine. Three years ago, I was a reluctant K-popper – like a shy voter unwilling to admit his pro-Brexit tendencies. Three years on, I have been converted. For this, for the generosity and good spirit of K-SHIN, and for the unyielding patience and humour of 501% Double SS, and to Alexis in particular, I say ‘Gracias’, and ‘Sorry I’m Sorry’.