To Heaven and Back 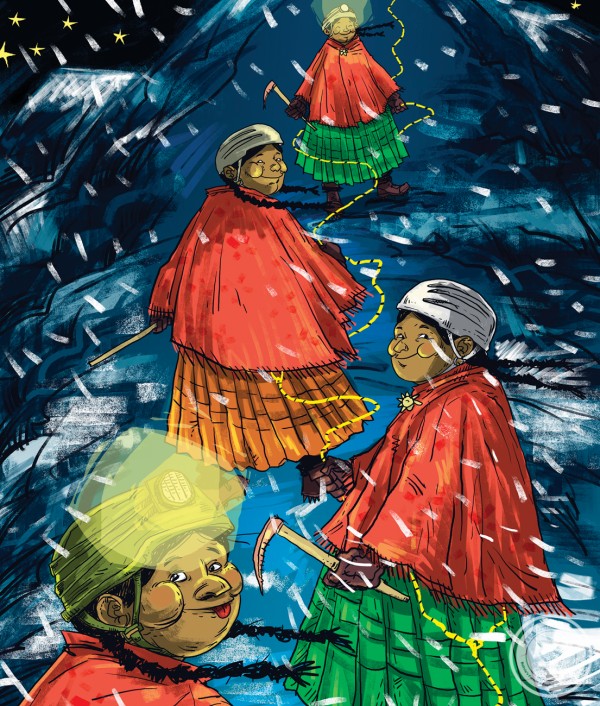 Perhaps the hardest part of climbing a mountain is coming down again. Standing at the 6,088m peak of Huayna Potosí you are met by a view so vast it is encompassed only by the curvature of the earth itself. Yet this spectacle is dwarfed by the unbearable exhaustion that such a vista entails. There is no sudden moment of completion, no immediate release at the top. The long, difficult return awaits, more painful and more arduous than the upwards journey could have suggested. Such a testing path is almost solely reserved for the all-male Bolivian mountain guides and the foreign adventurers they ferry. Why would it be any different?

Except this year it has been different, radically and powerfully different. A group of cholitas, largely a community of cooks with mountain-guide husbands, have made this journey and many others like it. They have endured the peaks of five mountains so far (with the aim of scaling the eight Bolivian summits over 5,970m), and in the process have drawn the attention and acclaim of international media. Only a few months ago, they conquered the so called Patrimonio of La Paz, the colossal Illimani, accompanied by a sizable film crew and even drones to record their achievement. The resulting documentary, produced by Indomita SRL, is aptly called ‘Mujeres de Cumbre’, Summit Women and is due to be released this year.

I spoke at length with Lidia Hauyllas Estrada, one of these ‘cholita climbers’, and joined her family on a hike up Huayna Potosí. At 49 years old, she’s fairly typical of the group whose ages range between 40 and 50, which is extraordinary given the challenges posed by such extreme conditions. As she puts it, their desire to climb doesn’t come from an aspiration to exclusivity: ‘We are the women who have taken the first steps, and we’ve taken them for other women so they can feel what it is like to go [up the mountain] or at least feel they can do this,’ she said. The determination of the cholitas to see the summits for themselves and to do so dressed in their traditional pollera and petticoats (with the addition of modern climbing equipment) reflects the message of tangible action that these women wish to convey. There is something glorious and brilliantly disjointed about the contrast between vibrant patterned skirts and deathly white mountain snow.

Perhaps the greatest example of what these cholitas have achieved is their scaling of Illimani. The symbolic momentousness of this feat aside, the climb is a brutal one. At 6,438m it is the highest peak in La Paz, and second overall in Bolivia. The ascent contains a notorious 200m, near vertical, ice section named the ‘Stairway to Heaven’, so called for all the accidents it is has caused over the years. Certainly there is real danger involved. Lidia says the hardest part of the trip is leaving her children and grandchildren behind. ‘They would always say goodbye and ask that I dedicate the summit to them,’ she says.

‘We are the women who have taken the first steps, and we’ve taken them for other women.’–Lidia Hauyllas Estrada

The trip up to the top took place over three days. Laden with recording equipment and six camera operators, the eleven strong group, along with some of their husband guides, arrived at the high camp the evening before the final climb. They tensely prepared the night the big ascent and set off at 12 am, in the dead of night.

The idea is to climb while the snow remains firm and before the fickle sun has a chance to alter the path altogether. This doesn’t change how fundamentally disorientating this night time departure can be. Heavy with equipment but little sleep and even less oxygen, it is hard to muster the colossal energy needed to place one foot in front of the other, let alone safely navigate the treachery of high altitude glaciers. Temperatures plunge into negative. On the trip I joined up Huayna Potosí, my water bottle was nearly completely frozen. The cold makes the trail even more of a battle. I can only imagine the ice of the most technical and challenging section of Illimani, the ‘Stairway to Heaven’.

So close to the sky, maybe something heavenly did await the cholitas scaling Patrimonio. Cresting the final ridge of the mountain that looks over La Paz they too shared the vision of a goliath. ‘Just beneath us there was a light mist. It was if we stood in the sky,’ Lidia said. ‘Then it started to clear as if the clouds around us were erupting out of a volcano.’ Still, it was the trek back that was truly gruelling. ‘It wasn’t the difficulty of the [return], but the exhaustion,’ she explains. A thick cloud of snow descended on to the group in their journey back to the high camp.

The difficulty of these mountainous comedowns also points to another challenge inherent in what these cholitas are doing. Returning to the world below the clouds and after the media fervour, presents a number of problems for these women who hope to continue climbing. Simply put, the time, supplies and equipment necessary for each trip adds up to an expensive bill. The Illimani climb was sponsored by the La Paz Municipal Government under the promotional project, La Paz Ciudad Maravillosa, but other sources of sponsorship are harder to come by.

There is also the possibility that marital concerns make it difficult to freely schedule climbs. Lidia’s husband, Elio, was eager to talk about how he supports his wife’s endeavours. ‘I feel very proud because I’ve been a mountain guide for eight years and this was a collective project,’ he said. However, on a later trip, he hinted that some husbands may be less supportive.

Whatever the limitations, endurance is at the heart of their endeavor. Lidia hopes to scale mountains for as long as she’s physically able, and the ultimate aims of the group aren’t small. In terms of climbing, Illimani is barely a warm up for the colossus that lurks at the end of the group’s checklist: the largest mountain in South America, Argentina's Aconcagua. In turn, their desire to inspire other women is intergenerational. Just behind me for most of the Potosí climb was Lidia’s daughter, Suibel Gonzales Huayllas. The guides and cholitas want to help Bolivians re-discover the mountains on their doorstep. A sport, Elio wryly notes, they might have more success in than football.

My time with Lidia demonstrated that to climb a mountain is to undertake a journey of epic proportions, a journey that doesn’t end with the high point. These cholita climbers have not only travelled further than anyone could have imagined, but they have created something special in the process. ‘We were over the moon that we had created a story right here in Bolivia,’ Lidia says, ‘that we, the cholitas, had climbed a mountain, something that has never, ever, been seen before’.