TO EL ALTO BY BIKE 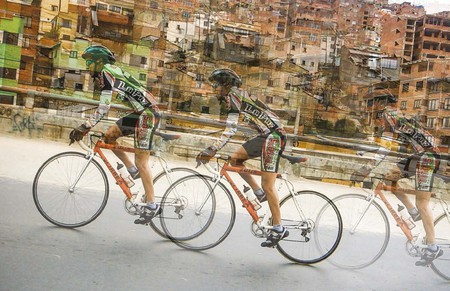 Culture, Social issues and Going Out

Why getting up the hills is only part of the challenge.

La Paz is not a cyclist’s city. A child wobbling around the Plaza Avaroa, a group of lads on BMXs doing tricks, someone slowly plodding up the vicious hill to the Avenida Ecuador—there are fleeting glimpses of the existence of bikes in this city, but nothing more.

And yet, arriving at the Plaza del Obelisco early one Wednesday morning in January, amidst the chaos of voceadores soliciting minibus passengers, the street vendors with their sweets and barrows of pasankalla, and a traffic policeman attempting to establish some kind of order, you would find a rather unusual sight: fifty three cyclists, bikes and all. They’re preparing for the first race of the year, a gruelling 13km up to the tollbooths that mark the entrance to El Alto. Whilst some hang around in head-to-toe sponsored kit, hobbling along in cycle shoes and making expert last-minute adjustments to equipment, there are others with grubby, battered and clunky old bikes, riders sporting woolly jumpers and tracksuit bottoms, tucked into socks to avoid accidents with gears.

Everyone I speak to tells me that cycling in La Paz is hard. Not so much because of the altitude, or even the hills, but because there’s no support, no respect, no understanding. Crisitan Conitzer, head steward of this event and a key figure in the cycling world of La Paz, tells me about the nightmares of commuting by bike. With few companies offering anywhere to park, let alone shower and change, it’s a logistical nightmare, and that’s without mentioning the traffic, the vagaries of the weather and the less-than-ideal condition of the roads.

Cycling for sport can’t be much easier. I am told that drivers aren’t deliberately malicious towards cyclists, but I can’t help but notice that almost every car in La Paz has a bump or scrape. Cristian agrees: 'We’re bad drivers here. Every day there are lots of little accidents. And then every couple of months, a really bad one...' Woe betide the cyclist who gets tangled up in a moment of road rage or simple misjudgement. Another competitor, a keen triathlete and coach, chimes in: 'I’m not afraid for myself, but it’s hard for beginners. They get scared, or it’s too difficult, and so they try another sport, or give up altogether'.

The issue that keeps cropping up is one of awareness: people don’t cycle themselves, don’t feel comfortable with their children learning to ride a bike, and don’t know how to react when they see a cyclist on the road. And in some ways, a race like this doesn’t help: the police escort closes the road, traffic piles up, those waiting along the autopista up to El Alto getting increasingly frustrated by the non-appearance of the usually ubiquitous minibuses. The road is wide enough for cars and cyclists, and yet the space is never shared.
After the allotted half hour of road closure has passed and the winners have arrived, abandoned their bikes and gulped down plastic cups of orange squash and sachets of flavoured milk, a sudden surge of minibuses appears on the horizon, racing its way to the top. It is intimidating, for a spectator. For the novices still struggling their way up the hill, forced off the road by the sheer force of traffic, it must be terrifying.

Perhaps this is why there aren’t too many cyclists in La Paz. I’m told that ‘everyone’ who cycles knows how to fix their bike, has friends who can bring in the parts that can’t be found in Bolivia. But for those who aren’t in the club, don’t have someone who can mind their bike while they pop into the bank and don’t know where to look on El Alto market for that spare inner tube, cycling in La Paz must be pretty tough. Nearly as tough as getting up that hill.