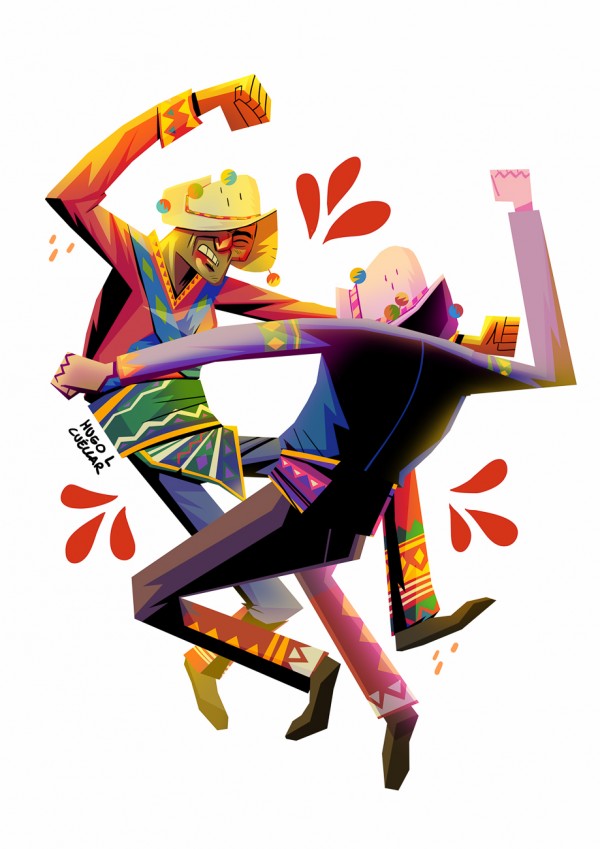 A Festival of Ritualized Violence

Even in Bolivia, a country well known for its many folkloric dances, the Tinku stands out. It is a dance that immediately catches your eye with its energetic style, mesmerising fighting moves and the majestic attire of those who perform it. However, Tinku – a word that means ‘encounter’ in Quechua – is more than simply a dance. Tinku is ritualized combat that the members of the ayllu partake in, sometimes with fatal consequences. These members of the ayllu are divided into up and down – aransaya and majasaya – to grow different crops across various topological zones, and every year the two sides come together and fight each other, a practice that has deep roots that can be traced back to pre-Incan times.

For some, the tale of Tinku begins with a great nation of warriors, the Qara-Qara, who had great prestige for their fighting techniques and war-making abilities. The Qara-Qara would demonstrate their martial prowess in ceremonies in Macha, their nation’s capital, located in the north of the present-day Potosí department. Their skills were so good that when the Inca colonised the Qara-Qara, the Sapa Inca’s bodyguards were recruited from their ranks through organised battles of the conquered population. The best Qara-Qara warriors would compete and the winners would serve the emperor.

In time, a religious content merged with these fighting demonstrations. In the Andean cosmovision, ‘balance’ is one of the central metaphysical principles. It gains even more weight when considered alongside humanity’s relationship to Pachamama, the source of all life and fertility. Those killed during the Tinku are considered offerings to Pachamama during this early May celebration.

Intimately linked to the agrarian cycle, this celebration involves feasting, drinking, music, and wijlla, a special ritual in which llamas and sheep are sacrificed, their blood offered as sustenance to Pachamama, who in return provides a good harvest. And of course, this celebration also included the famous inter-communal Tinku fights.

After the Spanish conquest, indigenous communities were forcibly stripped of their traditional idols, which were often replaced with depictions of Catholic saints. However, the roots of local culture were too strong to merely disappear, and a type of syncretism appeared. In the case of Tinku the original meaning of the Andean Cross celebration was adjusted to fit Catholic festivals: the Feast of the Cross (Fiesta de la Cruz) and sometimes the Lord of the Exaltation (Señor de la Exaltación), among others. This intricate weaving together of different cultures underlying Tinku means that today it is celebrated with a mix of customs: the demonstrative fight; rituals to Pachamama; and components of the Catholic faith. This richness has kept on growing, especially since the music accompanying the feast played by charangos and Jula-Julas took off. Today, the fighting moves and magnificent clothes of Tinku have become integrated into mainstream Bolivian identity, and the dance itself is now a celebrated feature of Bolivia’s main carnival celebration held in Oruro every February.

One of the clearest illustrations of Tinku’s gathering strength is the massive rows of migrants that come back to their communities year after year to join in on the celebrations. The young people who have emigrated to neighbouring countries for employment frequently travel back to their ancestral communities for the celebration, and, having been exposed to other cultures, bring new elements to festival. Now one can see drones, mp3 players, jeans, and football T-shirts alongside the more traditional elements of Tinku. And instead of only traditional chicha and guarapo drinks being available, beer is also now consumed massively.

Despite the image of nonsensical violence that outsiders might perceive from the dance, the reality in these communities expressed by an elder from Aymaya, a village in northern Potosí where the Tinku is practiced: ‘Tinku is the complementary encounter of the people from up and down: aransaya and majasaya.’ This is reflected in fighters’ cordial, grudge-free attitude to each other before and after combat. Tinku, rather than being about power and dominance, is at its heart about ‘balancing’ the two halves of the ayllu.

The Tinku remains at the heart of the culture in northern Potosí, where it originates, and continues to act as a bridge for the indigenous people who have left their communities in recent years. It continues to provide the Andean notion of ‘balance’ in the ever-changing indigenous communities of this rural area of Bolivia.