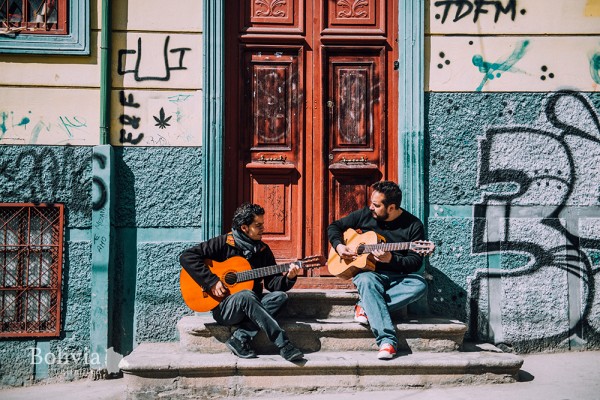 ‘If you truly believe in my song, make Bolivia yours as well

And let your hope and faith unite together with me’

These are the powerful lyrics of Negro y Blanco’s patriotic and most acclaimed song, ‘Píntame Bolivia.’ The song, which was a highlight of Negro y Blanco’s recent performance of trova music at La Paz’s La Trovería bar, expresses a sense of solidarity, a love for Bolivia and conveys a timeless pledge for equality, hope and peace.

At La Trovería, the concert was staged in a dark, small and intimate setting. Tables were covered with images of trova lyrics and seated an audience that wholeheartedly sang along to many of Negro y Blanco’s classics. The band, composed of Christian Benítez and Mario Ramírez, aims to communicate universal notions of peace, love, solidarity and a respect for human rights through music. The duo’s voices were calming and melodious, rendering the messages of their songs more powerful. The harmonious combination of two sole guitars and two voices added to the intimacy of  the bar.

Trova is a musical genre that originated in France, whereby French troubadours would sing poems in courts for the nobility or at musical contests. This genre was later adopted in Cuba as ‘Nueva Trova’, often expressing fraught emotions such as dissent, hatred, love and affection towards society or right-wing political regimes during the 19th and 20th centuries. Trova music became popular in Bolivia during the 1960s and 1970s, upholding the romantic and sentimental ideals that characterise Negro y Blanco’s music.

Bolivia’s past is marked by Spanish colonialism, racism, poverty and exploitation of indigenous people. ‘Poverty has always been widespread in Bolivia,’ Ramírez says. According to Benítez, since Bolivians embodied racial wounds following events in the 1960s and 1970s, self-analysis and introspection are paramount for the country’s healing. Trova, Benítez believes, provides a therapy for curing such wounds.

Negro y Blanco began recording their songs during the 1990s in La Paz and released their first album in 1998. Having grown up under ex-dictator Hugo Banzer in the 1970s, Benítez remembers the challenges that his family and peers faced during that period. Popular music conveyed what was happening at the time. It was ‘death and destruction,’ he says. This inspired the band to promote a message of peace through their songs. Since Bolivian songwriters and singers of protest music had left the country by the 1990s, the band saw an opportunity to bring about change through its artform. Seeing Bolivia as ‘a little laboratory’, the duo believes that such change could happen through trova music.

Ramírez and Benítez started out singing and songwriting as a hobby during their university years. Benítez recalls growing up to the songs of acclaimed Cuban trova singer Silvio Rodríguez and how he immediately fell in love with them on the radio. In retrospect, he says it was his mother’s way of indirectly educating him about music.

When the duo decided to pursue a career in music, both of their families were taken by surprise. But the band persisted in its songwriting and in its goal to ‘demolish walls and construct bridges’ through music, building a ‘better future’ for Bolivians.

During the 1990s and the early 2000s, the band began working with younger generations in La Paz as the founders of a movement called Guitarra en mano. ‘We called it a colectivo,’ Ramírez says. The aim was to write music together and constructively discuss pressing social concerns. It lent a voice to the younger generations and was a different way of seeing reality in La Paz, El Alto, Cochabamba and Santa Cruz. Although the band has produced three albums (‘Negro y Blanco’, ‘Negro y Blanco en Blanco y Negro’ and ‘El Negro y Blanco en la Fiesta’) it has also recorded compilations for social causes such as women’s rights and the environment.

Now, almost 20 years later, the band is about to release an anniversary album that features new music as well as songs that were written 15 years ago but never officially recorded or released to the public. For Benítez, Bolivia is a melting pot of diverse races, cultures, customs and traditions. Both artists hope to continue promoting integration and peace through trova music that ‘touches the human heart’ and creates a positive future.