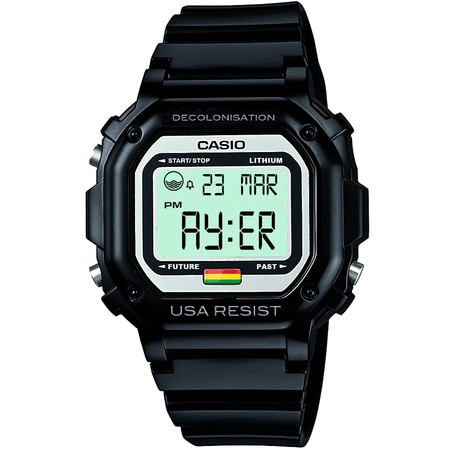 “The clock is just one part of a whole conjunction of themes. If you only see the clock going backwards you're not seeing anything.”

At midnight on the 21st of June this year, Bolivians witnessed the end of time as they knew it. In an unprecedented event for the country, they observed the reversal of the most visible clock in La Paz, which has since become known as the Reloj del Sur. The clock (stands tall), overlooking the Plaza Murillo from the legislative palace, and it is a symbol of a larger ideological project in Bolivia.
While standard clocks mimic the movement of the sun across a sundial in the northern hemisphere, the hands of the Reloj del Sur reflect the movement of the sun in the opposite direction. Simply put, this is a clock that runs counterclockwise.
According to Felix Cárdenas, who is Evo Morales’ Vice-Minister for Decolonization, the reloj exposes the way in which time, far from being abstract or universal, is a social convention; governed by history, place and nation. The Reloj del Sur, he says, proves that ‘Nada es universal. Nada es absoluto’.
Media outlets, however, in Bolivia and elsewhere, have covered the birth of the clock with some derision and several local politicians have been critical of the project. Norma Pierola, for example, who is a member of the Chamber of Deputies in Bolivia, accused the government of attempting to change ‘the universal laws of time’ with its novel clock. But this, it turns out, is not far from the government’s intention. In fact, the reloj is inextricably tied to the government’s programme of decolonization, which promotes the revindication of historically repressed Bolivian identities.
According to the Vice-Minister, the clock is not an innovation but a return to Andean values. ‘It is immersed in a movement that is not a creation of Morales or Foreign Minister Choquehuanca’, he said. ‘We are simply making visible what has always existed’.
The reloj, the wiphala, and the promotion of the coca leaf are all part of Bolivia’s decolonizing mission. This is why the Vice-Minister insists that the clock must be seen in the context of the broader political aims of the Morales administration. Cárdenas speaks of vivir bien, of Pachamama, and of dismantling patriarchal institutions. ‘The clock is just one part of a whole conjunction of themes’, he explains. ‘If you only see the clock going backwards you're not seeing anything’.

Cárdenas has a point. Perhaps there is more to the clock than the hands running backwards. ‘In the Aymara language there is no future', Cárdenas tells me, ‘Their language says that you have to look back to go forward’.
According to an anthropological study by Rafael Núñez, professor of Cognitive Science at the University of California, San Diego, the Aymara are the only documented case of a culture whose language conceives of the past as being in front of the subject, and the future behind, because the future is something that cannot be seen.

We teach children to ‘tell’ the time as if time were inflexible and rigid like the multiplication tables. There is clockwise and then there is counter-clockwise. On closer inspection, though, these distinctions are often completely arbitrary.
‘What cataclysm in the universe caused the 1st of January to be the New Year?’ Cárdenas asks, provocatively. ‘Time’, he concludes, ‘is a continuous discussion’.
Indeed, time has always had multiple meanings. It is a force whose complexity cannot be repressed by the imposition of one authoritative way of perceiving over another. The Aymara demonstrate that although time appears to surround us completely it is, at least partly, a subjective experience and a sensory illusion.

Pitting the Reloj del Sur against traditional, Eurocentric means of telling the time exposes how politics can determine our temporal reality. This is a view that Vice-Minister Cárdenas stands by as he passionately explains the political impetus of the clock project, ‘We have always been told that the United States is the world. Now we are thinking that the world might be Bolivia’.
This intersection of the political and the temporal, which goes some way to explaining the hostility to the government’s initiative, is not a uniquely Bolivian phenomenon. As Norma Pierola points out, it is possible to see the clock merely as 'a crude imitation of the Jacobin calendar'. The main difference, though, is that while Robespierre and his fellow revolutionaries imposed the use of a new system of time upon their countrymen, in Bolivia no-one will be forced to adopt the new system.
In the late 18th century, the leaders of the French Revolution declared the dawn of a new era in France with a calendar that began on the birthday of the First Republic. The goal was to produce a potent symbol of a regime that preached complete cultural transformation. But the new system of time failed in its enforcement, given the reluctance of the French to adopt the revolutionary calendar. Is the Reloj del Sur destined for a similarly tragic fate? Or will it have a lasting impact?
‘We don't need the liberté, egalité, fraternité of the French revolution’, Cárdenas says. ‘We're talking about our own constitution, which says Ama Sua, Ama Llulla, Ama Quella (do not steal, do not lie and do not be lazy)’.
Some people in La Paz share Cárdenas’ enthusiasm. ‘The reloj is a symbol of our difference’ one woman said. ‘It’s a symbol of Bolivia’. Others, however, as the chimes of the clock echoed in Plaza Murillo, were indifferent towards the Reloj del Sur, simply saying ‘no es importante’. For them, the reloj is a largely symbolic gesture.
And I would agree. However, sometimes symbolic gestures are important, as important though, the reloj is a testament to what is happening in Morales’ Bolivia. It is bold and controversial. It encourages non-conformist, creative ways of thinking; it is an interrogation of all that seems ‘universal’. For Cárdenas, as for Choquehuanca and for Morales, the reloj indicates that, in Bolivia today, plurinational, indigenous, ‘Nothing is normalized’.