Through the Eyes of the Blind 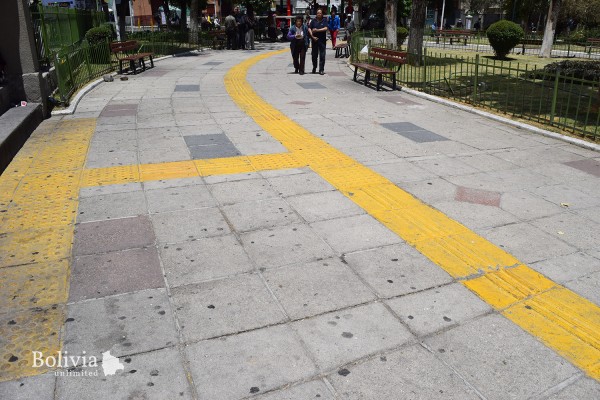 Deconstructing the challenges of the visually impaired people of Bolivia

The world view of visually impaired librarian Olga Mendoza affords insights into human nature and the kindness of strangers. ‘People in the city help a lot, they are very nice,’ Mendoza says. Crossing roads without audible signals, knowing which bus to take or where you are once you’re on the bus, all require the help of other city dwellers. However, as Mendoza explains, ‘In El Alto people can be indifferent… I think it is because many of the people in El Alto are from the countryside and lack awareness’.

‘Sometimes even if we would know the place, we [still] have to ask and ask, but like this we can find the place,’ Mendoza says. ‘The government is increasingly talking about inclusion,’ which is one of the keys to justice and dignity for blind people in Bolivia.

‘The government is increasingly talking about inclusion,’ which is one of the keys to justice and dignity for blind people in Bolivia.

Mendoza was in the sixth grade when she had a fall that caused serious visual impairment. Apart from going to school, she remained in her house for six years after her accident because of the lack of information and resources her and her family had about navigating the world as a visually impaired person. It wasn’t until ‘someone said to my mother that there was a rehabilitation centre [for the blind], so I enrolled,’ she says.

La Paz’s Institute of Blindness (Instituto Boliviano de la Ceguera) is located in the neighbourhood of San Pedro. It is a government organisation that facilitates the ‘rehabilitation’ and ‘readaptation’ for visually impaired people in the country. From where the centre is located (near the Plaza San Pedro) to Avenida Mariscal Santa Cruz, the sidewalks and traffic signals are equipped for the visually impaired – in the rest of the city these aids are sparse.

There are 1,323 visually impaired people affiliated with the IBC in the department of La Paz. These are people with irreversible blindness, whose condition cannot be improved with treatment or optical aids. Those who are not affiliated with the organisation do not receive any entitlements from the state. In 2002, the president of Bolivia’s Society of Ophthalmology, Joel Moya estimated the population of the country’s visually impaired to be around 40,000.

In IBC centres throughout Bolivia people learn the system of braille and how to live independently. ‘They taught me how to organise a kitchen, we have to have everything in its place,’ Mendoza explains. ‘While people who can see do it all quickly, [we have] a spot for the salt, the pasta, the vegetables, etc. Everything is well organised.’ Many visually impaired people remain unaware of their entitlements through the IBC, or live in remote areas far away from a centre and are therefore not taken into account by national data.

The IBC began in Bolivia in 1957 after the government passed a law to improve and support the livelihoods of the visually impaired. Since then, conditions have been improving thanks to several pieces of legislation. A recent policy of the Morales government outlines that the state will provide the necessary adjustments to homes of people who are visually impaired. In 2012 the government also passed Law 223 for the protection of rights and equal treatment of people with disabilities, it was described as a first-of-its-kind for Bolivia by the Minister of Health at the time.

Through the IBC identification card, the state provides health insurance, legal support and approximately 5,000 bolivianos in financial support per year to each visually impaired person in the country. Many find an additional form of income through a wide range of jobs, including working in the public or private sector, or playing instruments and singing on the street, though the latter is not necessarily a source of steady nor secure income.

After Mendoza lost her vision, she continued in the mainstream schooling system and undertook the same work as her peers using braille. ‘I learnt [braille] in three months. My teacher was very good and I also had a lot of motivation.’ Now, many years later, Mendoza is grateful she continued her education in the mainstream school system.‘ Above all, you meet more people and make more friends,’ she says.

That said, there are still many barriers for visually impaired children in Bolivia’s education system, including the lack of braille learning materials available in classrooms. However, three highschool teachers from La Paz’s mainstream school system in Achocalla are deconstructing these barriers and advocating for inclusion.

Rodrigo Durval and his colleagues Laura Rolando and Efraín Tapia created the initiative ‘Braille Para Todos’ [Braille For Everyone], through which they have successfully developed the first Bolivian-made braille printer, utilising 3D printing technology. They launched their printer publicly on 7 December 2018 in Achocalla.

‘Where we teach in Achocalla [about 11 km. south of La Paz’s centre] it’s provincial and in schools like these that are away from the city, materials for visually impaired students just don’t exist and these students are excluded. That is why our objective is inclusion by means of appropriate tools,’ Durval explains. ‘Imported braille printers cost upwards of US$7,000,’ rendering them unaffordable for most Bolivian schools, ‘whereas our printer costs around US$200, making them accessible.’

Most of the financial support for ‘Braile Para Todos’ has come from its three founders. ‘[The government] knows what we are doing and the printers we are developing,’ Durval says. ‘In fact, they have already made an order for five of our printers.’ The group hopes that in the future learning materials in braille will be readily available (or printable) in all Bolivian classrooms.

Julia Santa Maria, a social worker at the IBC in La Paz says, ‘what we look for is that [visually impaired] people are included in the mainstream education system… and have the same opportunities as anyone who can see.’ As Santa María explains, ‘This means they must be given the tools and materials necessary so they can be included…[for instance] in the universities [visually impaired students] complete the same work as those who can write…because they can record [their classes]’.

Technology has the power to equalise. Next to the IBC is the library where Mendoza has worked for the past 25 years. ‘[The computers] are the same, they aren’t special, the only thing is they have software installed that narrates the screen. This way we can use the internet and download things, etc.’ Through her work, Mendoza provides a wealth of value for her community, ‘I like helping people as well as teaching’.

‘Even though we are blind, we are still people who deserve respect,’ she says. ‘We still have to do the same everyday stuff, like buy food and run errands. Sometimes things are more difficult for us, like walking, for example… But what we want is that people have consideration for us, nothing more’.

‘Even though we are blind, we are still people who deserve respect’