THEY SEE ME ROLLIN´ 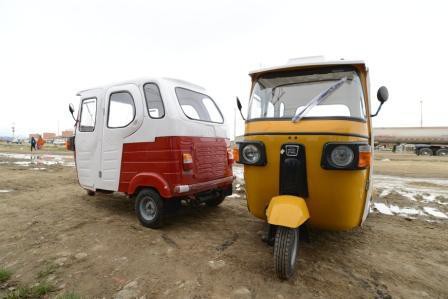 A new form of transport has descended on El Alto. Toritos (‘little bulls’) or mototaxis, as they are otherwise known, have made it their aim to conquer the whole of this ever-expanding city.

They currently cover routes from Villa Adela to Kenko, Cumaravi, Villa Mercedes and Callipampa, and tend to work at night. A trip costs roughly the same as a trufi (Bs 2 to Bs 3).

Alexander Apaza, mototaxi driver and radio operator for the toritos , tells BX that the service doesn’t just cover the centre of El Alto or the Ceja area, but rather connects the scattered neighbourhoods that surround it. They come into their own during busy periods, as evenings often can be, but also when minibus drivers refuse to finish their route, with the classic argument that ‘It isn’t worth it for one passenger, it’s here and no further’.

As Alexander explains, this is where the toritos can offer an alternative. The cost of the Indian manufactured Bajai mototaxi (of which 450,000 are made every year) is $4900, roughly the same as a used taxi from the early ‘90s.

Expensive for a glorified motorcycle you say? ‘It’s very economical, in terms of fuel and repair costs. It’s a motorbike but has the financial yield of a car’, Alexander explains. And its true; these astonishing three-wheeled creatures can carry up to 3 passengers. An impressive feat, considering their diddy 200cc engines. We might not be impressed just yet, but the environment is undoubtedly grateful with their arrival.