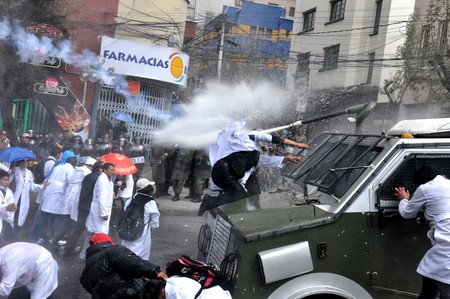 The Neptune also known as the aguatero is one of the mightiest of La Paz’s police riot control water engines. It has a 2000 liter capacity and 2 power jet motors, yet this aquatic monster was not created with this purpose in mind.

In the museum of the National Police of Bolivia I meet Captain José Arancibia Mollinedo. A political scientist by training, following in his father’s footsteps he entered the world of the military over 16 years ago. Captain Arancibia boasts an imposing size and an unshakable character.
Wearing a gray suit, pink shirt, impeccable mustache and drooping eyelids, he explains how these vehicles were originally used exclusively by firefighters. An old photograph of the vehicle taken in Antofagasta back in 1960 backs his claim. Yet during the coup that took place in 1975, the police had its eyes on Neptuno. When the Fire Brigade received another set of fire trucks imported from Brazil by Firefighters Without Borders, the police got its chance and adopted the Neptune, ritually adopting it by painting it over with the same olive green as their uniforms.

Apart from water they experimented with ammonia, which can produce a momentary loss of consciousness after coming into the slightest contact with the mouth or respiratory system. They have thankfully discontinued use of this chemical, but continued to experiment with other liquids, including red paint to mark rioters and rebels and thus making them distinguishable and easier to capture.

Captain Arancibia, had the opportunity to operate these vehicles for 4 years (1982-1985). He recalls a Carnival when the Neptune sprayed pepinos with water jets, provoking them to battle this aquatic monster while the crowd looked on at the comedic water battle. Yet he also recalls painful experiences such as the time he was ordered to use it against a strike of elderly war veterans. Unable to disobey the orders of his superiors, he tried hard to shoot the powerful jet of water towards their feet in order not to cause them any harm. During his work he also remembers feeling helplessness as he was not able to succour buildings caught in large fires due to the lack of fuel and water caused by insufficient funds. Such experiences were common during difficult, and at times warlike, moments during the country’s history.

According to Captain Arancibia, the impact of the Neptune truck on the population is based on the ‘control of the psychology of the masses’, since their mere presence has a powerful effect which remains the ace up the police’s sleeve when masses are out of control; a common occurrence in the country.