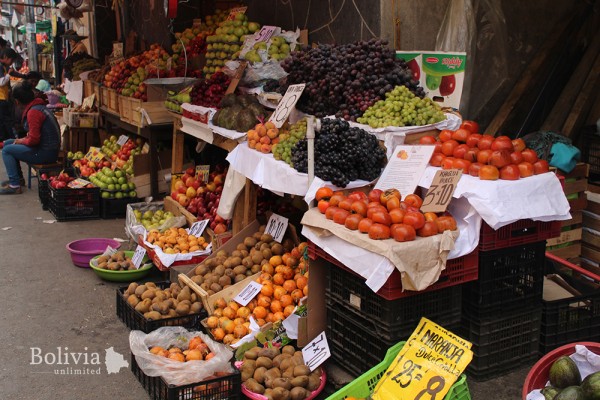 We look for the foreign plant, but find so much more

Our quest for Chinese garlic, which is reportedly infiltrating and damaging the Bolivian domestic garlic market, began with a minibus ride to Avenida Las Américas, where prostitutes parade at night and market stalls crowd the streets by day. These same stalls have gained international notoriety for exhibiting one of the world’s weirdest New Year’s traditions – displaying wall upon wall of red underwear. Our minibus driver had already given me some indication of the locals’ superstitious nature, explaining that the baby’s shoe hanging from the dashboard had been left behind one day, resulting in him now seeing it as a protective talisman. Similarly, the red underwear during New Year comes with a superstition of its own: It is said to bring the wearer love for the rest of the year. The fact that yellow underwear – which is said to bring the wearer money – can scarcely be seen among this sea of red is perhaps a testament to the warm and loving nature of Bolivians.

As we emerged at the top of the winding road, a flood of minivans swamped us. But as we edged closer to a mass of overflowing stalls, the hectic roundabout and constant honking receded in the distance. Here we found clothes and knickknacks imported from China, and then – through a back passage lined with a tarpaulin – we were met with the earthy smell of nuts, dried fruits and spices. Once around the corner, the rows of overflowing sacks did not disappoint. Spotting a stall that not only sold dried peaches and mushrooms but also fresh garlic, we asked about the Chinese variety. The caserita said her garlic was from Peru, and that Chinese garlic is always large and white. Despite insisting that her Peruvian garlic was good, she urged us with evident pride to seek out the Bolivian variety. Another stall along and there it was: highly praised Bolivian garlic, and at a very fair price.

The fact that yellow underwear – connoting money – can scarcely be seen among this sea of red is perhaps a testament to the warm and loving nature of Bolivians.

The market was a surreal experience. Chicken cooked on skewers sprang up in one direction; from the other arose full walls stacked high with shoes and frilly bikinis. Other stalls were bursting forth with colourful fruits. There were women selling knitting supplies, others selling cholita hair braids and decorative outfits, as well as a plant by the name of flor de Jamaica. I was told that it is rich in vitamins and also an effective hangover cure. Suffice it to say, I was eager to try it.

Rounding a corner, we found two cholitas selling cherimoyas and pacays – both native plants grown in the foothills of the Andes. These vendedoras explained how to eat the fruits. They were proud of the native products they sell, with the fresh produce often being brought into the city that very morning. We asked about this mythical big white garlic, and were cautioned against buying it. One woman even stated that, despite the poor flavour, they are sold at the same prices as others in this market – a surprising fact given the rumours of Chinese garlic threatening the local market due to very competitive prices. Further down, we encountered a barrage of new fruits: nonis, carambolas, kinotos and many more, the vendors patiently explaining the flavours and how to prepare them. Wandering through the maze of streets, the familial nature of the market became evident in the numerous generations manning the stalls and the casual chats between workers. Private guards patrolled the area, assisted in their endeavours by the vendors themselves, who all work together to prevent any theft.

Further along, we stopped to marvel at a sign advertising caldo de cardan, right near a dog sleeping on a chair at the entrance to a fancy dress shop with a young child in a cardboard box at its feet. It was truly an eclectic array of offerings. A couple of blocks down this winding market street we spotted more garlic. Upon asking for the elusive big whites, the stall owner scrunched up her face. ‘They are big and stupid,’ she said. We thanked her for her insight with a chuckle and moved on to a covered market at the bottom of Calle Zolio Flores.

Chicken cooked on skewers sprang up in one direction; from the other arose full walls stacked high with shoes and frilly bikinis.

I was struck by the strong smell of quirquiña, an aromatic herb often used in llajua, permeating the air. We bought some from one stall, and upon asking the vendor informed us that Chinese garlic was more likely to appear on the weekends with the influx of buyers and sellers. Otherwise, stall owners tend to avoid it due to its strong smell but lack of flavour. She then kindly gifted me with a handful of huacatay to accompany the quirquiña. Exiting the market, we were hit once again with the hustle and bustle of La Paz, now laden with fruits and new knowledge on how to prepare these fresh Bolivian products. Despite originally searching for Chinese garlic, we came away with far more – gaining experience with the family environment of these markets and the tangible pride of the owners for both their fresh produce and the roads that have led them to where they are.