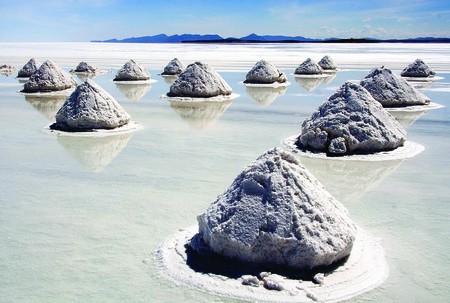 The need for alternative energy sources is increasingly becoming a worldwide priority. Oil and natural gas, on which we have become so reliant, are not sustainable sources. Efforts to change our ways, however, seem to be moving slowly, and have stagnated due to political interests that continue to benefit the large energy firms. In this international game, the arrival of lithium an alternative energy source could potentially alter a global dynamic, introducing a new and unexpected player: Bolivia.

Lithium is used in glasses, ceramics, lubricants, chemical products, aluminum and pharmaceuticals. It is the world’s lightest and least dense metal, and offers remarkable properties. It is also a component of mood stabilizing medication to treat bipolar disorder. Yet lithium is mostly commonly known these days for its current use in our mobile phones and laptop’s batteries, as well as for its potential use in powering the electric car of the future. For political, technological and economical reasons, the electric car has failed until now to become a convincing replacement to cars that run on gasoline. That said, the development of more efficient lithium batteries could help the electric car not only become a reality, but also a commercial success. Today, there are 300 000 electric cars in the world, but some economists predict that in the next 10-20 years, more than 16 million could be produced and sold.

Bolivia’s lithium is present in pools of brine located under the salt flats, mostly in the Salar de Uyuni (4,086 sq mi) and Coipasa, both of which are located in the regions of Potosi and Oruro, where according to some calculations, the country has 100 millions tons of the metal. Even by conservative estimates, Bolivia has more lithium than the rest of the world combined. United States, China, Argentina, Chile, Brazil, Australia also have lithium deposits and exploit them to varying degrees.

In the case of Bolivia, which has the largest reserves and the greatest potential, the presence of natural gas in the country’s territory could represent an important advantage to its lithium extraction. Bolivia’s enormous natural gas reserves could help it produce lithium at a minimal cost and in a self-sufficient manner.

Energetic resources are becoming the new gold of this century's challenge, and Bolivia, with 50 to 70% of the world’s lithium reserves is ideally placed to benefit. Lithium could be more than a financial gain for the country (a ton of lithium carbonate sold for around $5000 in 2012), it could give a strategic importance to Bolivia that could sway the geopolitical balance of the region – even the world – in its favor.

According to Lithium Specialist, Juan Carlos Zuleta Calderón, Bolivia holds the key of the electric era. It could inject enough lithium in global markets to control and dominate prices, the way Saudi Arabia has been influencing the global price of oil. Given the quantity of lithium resting underneath its territory, Bolivia could play an important hand in determining the prices of lithium batteries, making them accessible to people and accelerating the adoption of the electric car.

Unfortunately, Bolivia is not yet ready to face this challenge. Chile, the leading lithium producer in the world, with 66 000 tons extracted per year, and Argentina, have been extracting lithium for almost twenty years. Bolivia’s resources have been known since the eighties, but have only recently started to be explored.

Regrettably, the focus of Bolivia’s lithium project has generated more political than scientific activity. Uncertainty from foreign investors, a lack of political motivation, and a clear plan has worked against its advancement. The major problem is the dearth of Bolivian experts with the knowhow to extract and transform lithium. Technically, exploiting lithium is an extremely difficult task, and making batteries from it even more so. Even if China, Chile, the United States manage to extract and treat their lithium, those techniques can't just be copypasted to Bolivia's salt flats.

The extraction of lithium in Bolivia is made difficult by two technical difficulties. First, its lithium is located in an area where the evaporation process conventionally used is slower than normal, delaying its extraction for months– if not years. Secondly, unlike in Chile or Argentina, the magnesium, borax, potassium and other components present in the brine need to be separated in order to obtain lithium in its purest form. This makes the process increasingly difficult. On the other hand, these additional resources could be an added value for Bolivia, as magnesium, which has similar properties to aluminum, could be used as a substitute for steel.

On a political level, analyst Juan Carlos Zuleta Calderon raises the question and consequences of Bolivia’s alliances with Iran and Venezuela, direct competitors in the energy race and potential obstacles to the development of a lithium-based economy.

To be able to sell lithium batteries of Bolivian production will take several years and will require higher efforts from the government to accelerate the ongoing process. After years of discussions with France, Korea, China, Japan, and even Iran, Bolivia let Korean, Chinese and Japanese companies start working on their proposed projects. In January 2013, the Bolivian government inaugurated a lithium plant, with a 19 million dollars. This pilot plant is initially expected produce 40 metric tons of lithium carbonate per year, a minimal quantity compared to the overall potential of the Salar’s resources.

For now, the opening of the plant appears to be more symbolic than a true advancement, and is unlikely to tangibly affect the lives of common Bolivians. But the promise is there. The challenge for this country is to act faster, to avoid plundering from foreign companies, and to ensure that locals benefit from the gains, involving local communities in a consultation.

Bolivia aims at industrializing 100% of its lithium and at initiating production of batteries. If this can be achieved, Bolivia could indeed become the ‘new Saudi Arabia’ of South America and experience a growth similar to countries such as South Korea. The first step in this marathon has been taken, we now need to make sure we remain in the running.