The Unearthly Beauty of the Salar 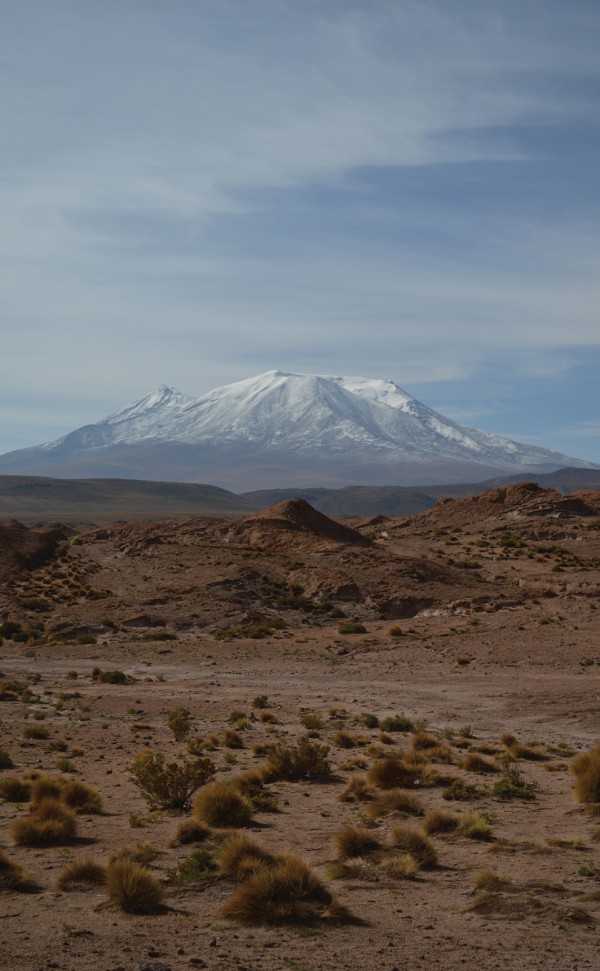 The Famed Landscape Is Matched in Intensity by the Neighboring Natural

We arrive in Uyuni at 6am, with the hesitantly blue morning sky above us and the muddy road beneath us. The four slow hours we spend in this southwestern town are enough to demonstrate that it is, for the most part, defined by the otherworldly landscape that surrounds it. Hordes of uniformly dressed tourists add colour to its bland streets, so much so that they seem incongruous, yet at the same time these streets are lined with tour companies, all advertising the same iconic voyage.
The road is bumpy as we leave the waking city, headed to the village of Colchani, home to an oasis of shops all selling identical tourist paraphernalia. We eat quinoa and muse on how the Salar, our next stop, actually begins: does this 10,500-km salt flat just appear completely out of the blue? Soon enough we’re back in the car and it has started. Milton, our guide, drives the 4x4 straight into what appears to be an exceptionally large, grimy puddle and we look skeptically at each other, but are soon semi-gliding through a seemingly indefinite expanse of water. This water sometimes gets so deep that the mountains in the distance, the only real reference point, are totally submerged and drivers en route to the Salar completely lose their way.
The horizon gradually disappears as the ground becomes piercingly white and flawlessly smooth, and the sky and honeycomb tiles of salt below merge together. The toy cars and miniature people in the distance seem suspended in the air; apart from them, there’s nothing but luminous blue and white for miles. Lukewarm surface water swirls around my feet as we wander around this ethereal landscape. Later, they are covered entirely by a translucent layer of crystallised salt.
Drops of rain pixelate the view through the front window of the car as we leave the Salar behind us. We drive through seemingly endless countryside, past quinoa plantations and dormant volcanoes shrouded in ghostly mist, and then finally resting llamas and elaborately decorated cemeteries to the town of San Juan. We sleep here for the night, in small rooms built entirely from salt. The floor is piled with large granules, which get in our shoes and our beds, and parts of the ceiling chip off periodically, but we drink cinnamon tea and talk about the idiosyncrasies of Russian cinema with our new travelling companions before sleeping right through the night after a long day.
The next day is also long: dawn is still breaking when we leave San Juan, but sunlight bathes the viewpoint for the Ollague volcano when we arrive mid-morning. Its porous, rocky terrain rises and falls like folds of crumpled paper, and there’s an unavoidable stillness with no plants to sway in the gentle wind. The only vegetation is a few scattered shrubs and unearthly, fluorescent green moss covering certain boulders. Revitalised by the fresh air, we gaze upwards and into the distance at the volcano itself.
We soon pass through a handful of lagoons – one pastel green, one an immaculate reflection of the mountains that lean over it, almost every one home to more than one species of flamingo, tinted pink by the algae they eat. We tiptoe over marshy ground, which seeps into our shoes, to the edge of the water. Thousands of tiny flies hover over the spongy grass underneath as we get a closer look at the curious hues within each lagoon and at the entirely oblivious flamingos that wade around the water’s surface. The air is thick with sulphur when we get out of the car at Laguna Hedionda, our final stop before a lengthy crawl through the desert. This is a drive which strangely brings both an unshakeable sense of isolation, and also an awareness of the hundreds of others following a similar trail. Ours is just one of the paths etched into the gritty sand; others vary only slightly.

Soon we've entered the Eduardo Avaroa Andean Fauna National Reserve. Milton chews coca leaves as we ascend higher, eventually reaching the final lagoon of the day, mere minutes from where we’ll spend the night. The altitude has already left us in a dazed state, and the fact that Laguna Colarado surpasses the others in both scale and appearance intensifies this. Its banks are home to idle, grass-chewing alpacas, and are so vibrant that their colours appear almost saturated, unreal. Looking down at where the blue water and verdant grass meet is like looking at the earth from space. The varying hues – pink, red, white, blue – within the lagoon itself make it seem as if someone has dropped ink in this huge stretch of shallow water.
The next day we rise at 4am and embark out into the unbroken darkness. The night before was filled with shooting stars and radiant electric storms illuminating the mountains from behind, but this morning is coal-black. After some erratic off-road driving, we see an enigmatic plume of smoke silhouetted against the nearly sunrise in the sky. It’s just one of the many billowing natural geysers we meet on our way to swim in the aguas termales. We reach these mere minutes before carloads of others, and at this point they are unparalleled in their tranquility. Steam emanates from the water forming a mystical layer over the rocky ground, and the boiling natural heat soothes our weary bodies while the frosty air blows sleep from our eyes.

Our next stop, the nearby Dalí desert, was named because of its similarity to the one portrayed in Salvador Dalí’s The Persistence of Memory, but the landscape we see later that day is more like a collage. Mountains and desert share the same space. The shadows of the clouds above provide the only real definition on the sandy ground, a quasi-union of the sky and the earth. We drive through luscious green valleys, and then in no time at all meet landscapes so rocky, misty and desolate that they appear Martian. We see rocks shaped like dogs and parrots in the Valle de Rocas, and drive straight through thick grey cloud all the way to where the national park meets Chile, and back again to the miniature city of Uyuni.
In Uyuni, you drive for hours through immense landscapes, occasionally passing through tiny human settlements, which seem inconsequential compared to their surroundings. Travelling here brings with it the realisation that this is an enormous and varied world.