The tribulations of being tribalised 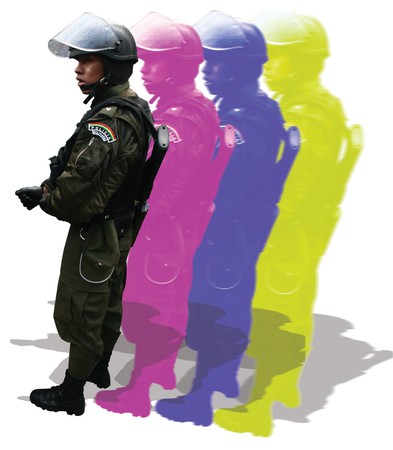 There’s something decidedly tribal about them. They are always armed, often with multiple weapons. They wear identically olive-green, seemingly bulletproof uniforms. They act instinctively. Like members of a cult, they stand by secrecy and hierarchy. They are united by a shared cause—to serve and protect. The tribe that is the Bolivian police is comprised of individuals with individual needs and desires, united for the nation and love of the law. Ironically, indoctrination by the law itself has stifled members of the institution, and in recent years they have been subject to under-appreciation from an overly-critical population. These challenges have brought about a renewed quest to reclaim their rights and discover an identity.

According to sociologist Juan Yhonny Mollericona, a great 'insecurity' has swept over Bolivia. Crime in La Paz rose dramatically from 1995 to 2001, increasing more than threefold, but through modernization efforts crime has decreased in recent years.
Today, the demand for further police modernization is apparent. After a failed attempt to institute a model of communitarian policing in 1999, this initiative has been given new life at the start of 2013. In cooperation with the British Ambassador Ross Denny, the police have been putting into practice this model, which has as one of its main components the requirement that policemen devote greater time to foot patrols, as a way of integrating them further with the local community.

Historical Tensions
On the surface, it’s just an institution. But being part of the police force in Bolivia means more than this, bringing with it a history fraught with subjugation, both of its members, and of the police in relation to other, more powerful, institutions. The Bolivian Police has historically been separated, tribalized by its tensions with the government and the military, a struggle that has been salient since 1949, when the police began demanding social and institutional reforms.
During the National Revolution (1952-1954) the police distanced itself from the government, and the military took its place—forming a military-government alliance that for the next fifty years would manipulate the police as an instrument with which to further a set political agenda. Inevitably, this separation further weakened the already underdeveloped institution. In 1965, the Police was reduced to its lowest institutional level under the command of the military. The police’s existence was trivialised, as policemen were only called upon when needed for assistance. Historically, the military has been the privileged group, receiving higher pay and benefits from the government. Today, on an institutional level, the relations between the police and military are cordial on the surface, though both institutions have been scarred by their problematic shared past. Latent resentments stew underneath the surface only to spill over at critical moments, such as those of February 2002, when far from helping to keep the peace, both forces used firearms against each other. Since then, both institutions are often called upon to work together in times of conflict or social unrest. Individual officers nevertheless express resentment towards the military, an institution they still consider more privileged.
During the first term of Hugo Banzer’s dictatorship in the early 1970s, the Doctrine of National Security turned the eye to the security of both the state and society. Action was then taken to improve the Police Institution, bringing upon the era of Militant police that were charged with the responsibility to control society, fight against delinquency and social marginality.
The militaristic aspect is still more than residual. I asked an officer why he was poised so readily to shoot, his hand on the trigger, on a barely busy street corner. As if reading from a script, he replied, 'it’s only for show, to keep the peace'. As he said this, his eyes were forward, his posture tall, forming sentences as if he were swearing by a book.
Through the national shift to improve internal security, the Bolivian Police floated with the tides of the nation’s needs, its own needs being disregarded; it represented a utility rather than an independent institution. The purpose and identity of the police was still unclear, and so were assimilated by the military and made to focus their attention on gathering military intelligence to battle drug trafficking.
In his book ‘Policía y Democracia en Bolivia’, former Minister of the Presidency Juan Ramon Quintana recounts how 'the police were converted into a docile instrument that supported not only the repressive structure of the government. Expanding upon its traditional functions, they took increasing part in corruption and delinquency in favour of the government’s rule’.

Present-day struggles
The issue is rooted to the fact that the police are a single national tribe rather than a clan with different bands and kin-groups. Because the police institution is structured in a similar way to the military, their respective duties have—and still do—overlap, resulting in police falling in the shadow of the military. This further makes them somewhat unapproachable by the general public, a middle state that translates to its lack of identity.
Coronel Rosa Lema, who currently works as the Commander of the Police Station of Cotahuma, likes to believe that police are an integral part of society. This occupational group has been forced to be a tribe but unlike the dwindling population of indigenous Amazonians, they desire to be integrated into and accepted by society, as an approachable entity as well as a protector. However, they are conceptually isolated both due to public perception and a privation of certain constitutional rights.
Law 101, which outlines the Disciplinary Statutes for the Police, was passed on the 4th of April 2011. Although there are sections of this law which clearly state these cannot contradict constitutional provisions, it goes some way towards separating this group from the laws which bind the rest of the population. In a manifesto, they complain at being unfairly isolated from the rest of the Bolivian workforce. A mutiny held in 2012 had the purpose of demanding higher wages, as well as denouncing this law as unconstitutional; some members of the Police Force believed the law failed to uphold the principle of presuming the innocence of the accused in internal disciplinary proceedings.

The Tribe’s Values
Law 101 stipulates the police force is subject to the principles of honor, ethics, discipline, authority, loyalty, cooperation, responsibility, hierarchy, obedience and professional secrecy. Keen to see how these principles work in practice, I asked some members of the force who, despite resentment, seemed to have internalised the principles outlined in this section of the law.

Honour
Despite years of training leading to meagre wages, many policemen are steadfast and passionate about what they do. According to Lema, a total of 800 new recruits enter the institution each year. To Officer Abraham Felipe Felix, the police are paragons of duty and honourability. Their philosophy, in his own words, is to abide by the law, save the weak, help the sick, and influence the youth. They say they respect the law, and like to believe that the law respects them.

Ethics
Modernization of the institution has changed the requirements to enter the force; no longer is unquestioned political loyalty a criterion, but rather physical aptitude and willingness to serve and protect. Felix said that many are driven by their personal interests, and rather than superiors acting through political motive, they are driven by ethical disposition.
Discipline
'La vida es un poco dura', officer Jaime T. Murga said, explaining why some police are turned into violent creatures. On the inside, they are taught to be rock hard against drug-traffickers and terrorists. The punishment given during training is often drastic and militaristic, and the residuals are sometimes taken from the confines of the school to the household.
Cooperation
Even outside of duty, a policeman constantly identifies with his tribe. 'They don’t just go home and rest. Their lives are not separate', Murga said. Although there is an obvious hierarchical arrangement in the institution, Felix believes that all police are one in the same, bonded like kin by the purpose of public service.
Obedience, Hierarchy, Secrecy
Professional secrecy will hold the obedient policeman’s tongue when he is asked a hard question. Policemen have been indoctrinated to be faithful to their superiors, even if it means not denouncing corruption. Speaking with the individuals, they are all united by this ideal—if they say anything at all it is minimal and in a hushed voice. While this principle of secrecy helps them protect valuable and sensitive information, it can also have the unintended consequence of covering up internal corruption in the police force.
The Police in Society
They claim responsibility for the wellbeing of the community. In the past, the police has been used as a tool to instill fear and enforce discrimination amongst the people, but today the police is identifying with values not commonly associated with them. They now try to work with the community instead of against it. The development of Bolivian Democracy was the enzyme for the current civil nature of the police. According to Bolivian philosopher H.C.F. Mansilla, the ideal of 'Communitarian Police' was conceived in the 1980s. For Lema, the police are in the process of building a communitarian culture, in which the police work directly with the citizens, occupy and fix dangerous areas in communities, and work with government authorities to resolve issues such as gang and domestic violence, as well as drug use. While this may seem like a natural role for the police force to adopt, this hasn’t always been the stance.
'We are often poorly perceived by the public, but we are a necessary evil', Felix tells me, sporting a bulletproof vest, his gun nestled by his side.

'Violence is instinctual, to defend ourselves we can kill if we need to', Felix tells me, explaining that it’s not uncommon for them to use violence before using a verbal approach.
Yet behind this hard facade, it is clear they want to be perceived as human beings. While the police may seem just as militant as their camouflaged counterparts, their purpose is quite the opposite, according to Lema, who explains that while the military is trained to attack, the police swear to defend, especially with this new ideal of communitarian police. Lema holds fast to the idea that policemen are as integral a part of society as anyone else, that police and citizen life are not two different identities.

Unfortunately, the police’s public image is largely negative, and in urgent need of having trust with this institution reinstated. According to a report by the CSIS Americas Program, as of 2012 more than 60% of those interviewed believe the Bolivian Police are involved in criminal activities. If you ask the common passerby about their opinion on Bolivian Police, the first word that often escapes their lips is 'corrupt'.

It can be argued that while the corruption in the police force and Bolivian society are endemic, the current law governing the police doesn’t help. Rather than discouraging corruption it can be seen to shield it. With their freedom to speak their mind being restricted, policemen are separated from the rest of society and denied an opportunity to be honest, opinionated and individual.

The future state of this tribe is unclear. The government, citizens and police know that a society needs, and cannot function without, a police force; former Minister Quintana goes as far as arguing the police serves as the 'only agent of cultural mediation' between the government and the people. It seems clear their quest for rights and an identity is not only the concern of this olive-green tribe, but of the country’s citizens at large. To be a part of this tribe means to embrace both physical and psychological changes and challenges, to surrender oneself to the greater good of the nation despite a lack of appreciation. This identity has been and always will be in constant flux.