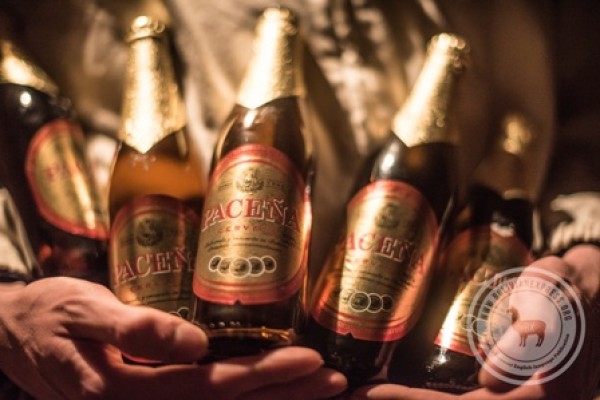 Bolivia’s beer scene has never been quite so artsy nor quite so crafty. Microbreweries are springing up as often as posters calling for access to the sea, while the traditional behemoths Paceña and Huari show an evergreen quality that would put even Mick Jagger to shame. As such, Bolivian Express thought it was high time to provide you with a comprehensive and definite Top 10. Watch out, things could get fizzy.

BIO: It was an interesting marketing ploy by these alteño brewers to name their potent lager after the proverbial thorn in the side of Jesus, who is something of a cult hero for many of its customers – like Donald Trump releasing a soft drink called ‘Bad Hombre’, or Gotham a cheesecake entitled ‘Bane’. For accuracy, though, the name Judas does seem unerringly apt. This 7%-strong, explosive pseudo-lager will, without doubt, betray you at some point during the night.

Did you know? After getting stabbed in the back – and liver – by this carbonated firewater, you will not rise again two days later. This is a joint marketing falsehood planted by both the brewery and the Bible.

BIO: While fine wines intensify with age, Bock’s manufacturers have seemingly made a conscious decision to mellow the taste of this once-punchy lager. Its unique flavour and 7% alcohol content are created by a process called bottom fermentation, with extra months of cold storage required to iron out such a strong brew – so strong that you will be doing some bottom-fermenting of your own should you quaff this carbonated yeast feast.

Did you know? Residents of La Paz will often use the popular phrase ‘Put a Bock in it!’ to friends they deem tiresomely sober.

BIO: ABBA got it right when they wrote the politically groundbreaking lyrics ‘Honey, honey, how you thrill me, ah-hah, honey honey’. Stier Honey Bier is the proverbial ‘nectar’ of the gods. Brewed in cochabambino hives by an army of honeybees, this artisanal pollen-fest is both a love and a taste machine. Ooh, it makes me fizzy.

Did you know? Stier was marred by a 2012 scandal after investigative journalists working for La Razón revealed that it had been employing bees without payment, against their will, and under threat of destitution.

BIO: Advertising powerhouse Paceña sponsors everything from World Cups to cirrhosis of the liver. Brewed by CBN (Cervecería Boliviana Nacional), Pico de Oro’s gold logo is as synonymous with the tourist’s view of Bolivia as coca tea, alpaca-wool jumpers, and President Morales’ unquestionable footballing ability. Unquestionable for fear of indictment, that is.

Did you know? Although the name Pico de Oro translates as ‘Gift of the Gab’, there is no current evidence to suggest that beer can speak.

BIO: Brainchildren of the CBN family, Paceña and Huari are somewhat reminiscent of identical twins separated at birth. Were this a film, the two long-lost lagers would go on to lives of Sliding Doors divergence. In reality, though, they both share a very similar stomach-destined fate.

Did you know? The Andean Huari civilisation, preceding the Inca Empire, was named after their penchant for this lager. No smoke without fire.

BIO: An ale touched by Midas and manufactured in Achocalla, this golden Kölsch beer is as smooth as Marvin Gaye in a seedy karaoke bar. Silence may be golden, but Saya Dorada is the definitive 24-karat real deal. So gold, in fact, is Dorada that rapper 50 Cent is alleged to have traded his entire jewellery collection for a half-pint of the golden nectar back in the early noughties.

Did you know? Saya Dorada, translating as ‘Golden Skirt’, was particularly popular among the Spice Girls during the mid-to-late nineties. Not Ginger though. From 1991 to 2004, she only drank Scrumpy Jack.

BIO: Bringing Oktoberfest to Santa Cruz, this dark, malty, Munich-style lager out of Sabores Bolivianos Alemanes (SBA) brings a taste of Bavaria to the jungle. A particular favourite of both Simon and Garfunkel after the latter cleverly realised that his surname rhymed with ‘dunkel’, Corsa brings us the closest thing to Guinness outside Bolivia’s Irish Pub scene.

Did you know? After a long and drawn-out legal battle with Vauxhall, SBA eventually secured joint custody of the name Corsa in 2013, settling out of court for a Mars Bar and a packet of Kettle Chips.

BIO: Aromatic, flavoursome, and fruity, Niebla puts the ‘art’ into artisan. The brewery’s title translates as ‘fog’ in English, and true to cliché, beyond the fog lies a sparkling clarity of taste that marks this Red Ale as one of the most distinctive brews in Bolivia. Every cloud has a silver, or in this case red, lining.

Did you know? Despite popular misconceptions amongst deuteranopes, Niebla Red Ale is not, in fact, red.

BIO: Brewed in Sucre by Café Florin owner Ted Handele, Chala boasts a truly unique flavour. A wheat beer infused with spice, cilantro, and orange peel, Ted had mastered artisan before brunch had even been invented, let alone guacamole abbreviated to ‘guac’. Brewed using Dutch and Belgian methods, Ted has taken the philosophy of ‘If you can’t beat ‘em, join ‘em’. And thank Judas he has.

BIO: Another masterful product from SBA, this light wheat lager is premium in both name and quality. Prost’s flavour guru Guido Mühr is German, and the company prides itself on bringing traditional Bavarian quality to its beers. And it hits the spot with the precision of a German penalty taker.

Did you know? On account of his fierce rivalry with French F1 driver Alain Prost, Brazilian racer Ayrton Senna was often seen urinating into discarded Prost Lager bottles before throwing them onto petrol-fueled bonfires.