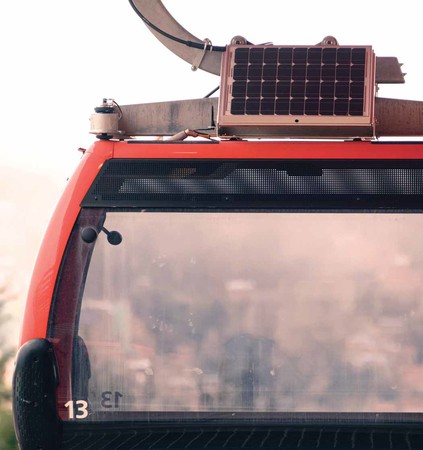 From El Alto to Zona Sur

La Paz: a unique city, scrambling its way up slopes so steep that only a madman, you would think, could possibly imagine building anything here. And its transport problems may well be unique as well. Many paceños have been saying for years that they’re fed up with a transport system that includes 853 minibus routes and yet somehow manages to be unreliable, uncomfortable and incredibly slow. And when you’re sat crushed up on an overcrowded bus, inching its way along at a fraction of the speed you could walk, you can understand why.

But how to go about finding a solution? Imagine plotting the most common journeys made in La Paz and El Alto on a map, then linking them up with a few brightly coloured lines. You might well end up with something resembling the plans for the new teleférico, a cable car system stretching from the heights of El Alto to the chic neighbourhoods way down in the valley of Zona Sur. It’ll be the perfect way (it is hoped) to sail over the congestion, taking in some stunning views of the city and its mountainous surroundings. That is, if you have time in the ten minutes that it will take to travel the length of the red line from La Paz’ Estación Central up to 16 de Julio in El Alto. With 440,000 people commuting between the two cities every day, it’s clear that this development can’t come soon enough.

As reported by The Gondola Project, a website dedicated to coverage of cable car transport projects, this will be the world’s largest mass-transit cable car system (with three lines and a total distance of over 10km, eleven stations, 427 cabins and a capacity of 18,000 passengers an hour). For those of us who imagine cable cars as nice little tourist attractions, the idea of doing your daily commute on one is utterly alien. Yet this is what is envisaged here: Diego Prieto of túatú, the team in charge of marketing the teleférico, says that there are definitely short-term plans for more lines. “There’s been talk of seven, talk of eleven. We just don’t know the exact figures yet.” Imagine an underground system like the London tube or the Paris Métro, then string it on wires above the city. That’s the vision.

Although cable car technology has been around for a long time, the concept of using it as a mass transport system is pretty new, and it’s easy to overlook how big a step for the city this actually is. Marketing strategies like colouring the three lines (and their cabins and stations) red, yellow and green (the colours of the Bolivian flag) naming it “Mí Teleférico” and organising children’s drawing competitions and an Instagram photography prize seem pretty obvious, pretty straightforward, until you realise just how important this “appropriation”, as Prieto describes it, actually is. “This is a new kind of transport system in Bolivia… for a lot of people, this will be the first time they ever go in a cable car.”

And so this is a hybrid campaign, making use of an integrated web of social media sites and a team that’s been steadily working its way around the city explaining the “ABC of the teleférico”, down to things as basic as how to get into a car. Prieto describes the “mentality change” that the teleférico will bring, referring to the WiFi access, bicycle parking and virtual libraries that will form part of each station. I can’t help but think that this is a little optimistic, being reminded of the image doing the rounds of the Internet of a minibus strung up on a cable, and an unfortunate passenger doing what comes naturally to any user of transport in La Paz, and, seeing that they are passing conveniently close to where they’d like to get off, declaring “¡Aprovecharé!”

This is perhaps the greatest problem that the team behind the teleférico has to face: not so much the technical problems of building around a crowded city or at this altitude, for, as Steven Dale of The Gondola Project explains, “Cable car systems have been designed to operate in some of the harshest alpine environments in the world. The technology is uniquely suited to deal with extreme elevation changes and altitude challenges.” No, the fact is that the residents of La Paz are used to their transport being slow and uncomfortable, but exceedingly convenient. For anyone used to structured bus services with stops and timetables and maximum numbers of passengers, coming here feels like a step back to the days of public transport past. And yet there is the hope that in a few months’ time, the city will be a showcase for the transport of the future.

It is, of course, all part of a modernisation project promoted by a Bolivian government determined to drag the country into the 21st-century. After years of lagging behind its Latin American neighbours, it’s unsurprising to hear the pride and ambition in Prieto’s statement that this teleférico is an “incomparable project… we hope that it will become the most popular in Latin America”. And part of this modernising impulse comes from outside: there are only three companies worldwide with the technical expertise to build a cable car system of this scale, and it was Austrian firm Doppelmayr who won the contract for the project. Yet it becomes clear from speaking to túatú how important it is for the image of the project that it be seen as a Bolivian initiative. The $234.6 million government investment in the project is being financed by a loan from the Banco Central de Bolivia, the operators and technicians will be Bolivian (after being selected and trained by Doppelmayr), and the maintenance will ultimately be transferred to these local experts. The Austrians may be doing the building, but the message is clear: this project is Bolivian.

This isn’t just a nice way of encouraging potential passengers or creating some catchy slogans for a presidential re-election campaign: it also adds a certain legitimacy to the acquisition of land that was needed for the project. Whilst some of it (such as the former train station) already belonged to the government, other areas had to be acquired from private ownership, with what Prieto describes as “fair compensation” for those who have had to be moved. Somehow it seems easier to swallow the taking of land for a project that can claim to be “by Bolivians, for Bolivians” than for anything that might have the taint of foreign investment on it.

Ultimately, whilst it is clear that the arrival of the teleférico will change La Paz, no-one knows to what extent, or how. Not the neighbours above whose houses the cars will pass continuously every twelve seconds for seventeen hours a day, not the minibus drivers who hope to convert their service into a shuttle between these key points of arrival and departure, not the accountants who will have to balance the books to ensure that ticket prices are competitive and yet also cover the system’s operating costs (a surprising aim, since Dale’s assessment is that “virtually no public transport system is self-sustaining”). At the opening of this year’s carnival, the iconic clown-like figure of the ch’uta bounded out of a teleférico cabin to embrace the outgoing cholita queen: the perfect marketing image for this city’s blend of tradition and modernity. Yet it still remains to be seen whether the teleférico itself will be able to win a place in the hearts and routines of ordinary paceños and alteños.