THE STREET ART OF LA PAZ 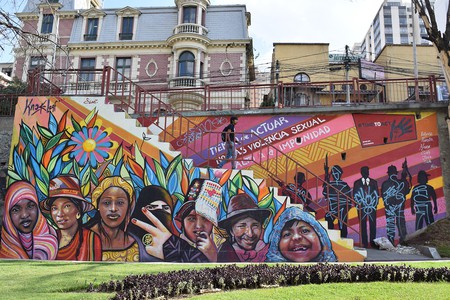 The Artistic Battleground for Political and Societal Expression

Very few of La Paz’s walls, doors and highways have escaped the touch of the spray can and brush; graffiti tags, murals and political slogans line almost every street. This phenomenon is not exclusive to Bolivia, though; it has become a distinctive trait of almost every Latin American city.

Graffiti historically belongs to underground, anti-establishment movements, and its proliferation tends to increase at times of political instability, dissatisfaction and revolution. And Latin America is a geographic area where the struggle against poverty and the fight for human rights has a tortuous history. The long-standing desire for positive change and the street art it inspires can be seen in the domain of the people where they grow up, work, play and live: in the streets.

There is no better example of a graffiti campaign aiming to inspire change than the work of Mujeres Creando, a long-standing, well-organized feminist anarchist group whose clear messages are reflected in their recognizable graffiti style. Slogans such as “Mujer! No me gusta cuando callas” (Woman! I do not like it when you are quiet) are at once critical, funny, carefully considered and, above all, provocative. In areas where there is a concentration of a specific problem (sexual assault, domestic violence), a special effort is made to make a critical, cutting message heard; otherwise, political centres, schools and thoroughfares are targets.

Mujeres Creando represent a vulnerable group in Bolivia, and they work hard to bring about a new, equitable society and unseat machismo and the patriarchy from their pedestals. It's an uphill battle, and it takes place not only within the walls of National Assembly, but in public spaces. While the aesthetic of Mujeres Creando's graffiti is important (the group's trademark firma and stylistics makes the art instantly recognizable), in the words of leading member Julieta Ojeda; 'It's not art just for the sake of art'. Their graffiti is a real, effective political weapon in their ongoing struggle.

For others, images speak louder than words. The street art of La Paz is varied, often political and always impressive. The street art collectives in La Paz are a far cry from the mindless taggers and handymen of rival gangs. They are a network of young, thoughtful and proactive men and women, who not only exercise their right to have their voices heard in the public sphere, but often seek to inspire ideas and positive change through their art itself. Thus, the bright, political murals of La Paz impress on two levels: in their messages and in their aesthetic power. One such artist, Knorke Leaf, was commissioned to create the #timetoact mural on the prominent Avenida Arce, which highlights the real and seldom-discussed issue of violence against women in Bolivia. Central to her philosophy is the belief in the power of art to inspire positive change. For her and many others like her, 'Art is a weapon of future; art can help in the struggle. It is important; the struggle is the reality we are living in.'

On the eve of the presidential election, political parties have realized the potential for self-promotion on the streets and have zealously taken to them armed with brushes and paint. Alongside the blatant electoral campaigns, there can be found the political slogans of Los Satucos, made distinctive by their signature devil-tailed sign-off. The Satucos, active since 2004, are a political action group, strongly allied with the governing MAS party, yet independently run by ex-Assembly member Gustavo Torrico and a group of activists.
Other street art collectives have spoken out against the Satucos, claiming that the group has nothing in common with the unfunded, spontaneous work of street artists and graffitists such as Knorke Leaf, and that the Satucos' prolific and extensive presence on the city walls is an intrusion into what is rightfully a space reserved for the people’s voices. The Satucos are seen by many as political propagandists, thinly veiling themselves as an underground movement in order to benefit from the exposure which the open stage of the streets offer.
Yet, there appears to be a universal consensus that if you are creating debate and ideas with your work, making people think about what you have written, then this is a form of art and therefore its presence on the city walls is ultimately a force for good. I asked Torrico for his opinion on the various graffiti campaigns, and what emerged straight away was his genuine enthusiasm, support and utmost respect for the street art of La Paz; 'La Paz would be a horrible place without street art'. Indeed, he argues that since the graffiti of the Satucos is always positive in tone, never slanderous and, above all, creative in its use of puns and wordplay. Reflecting on whether their work can be considered art, he believes that these slogans earn their place on the walls of La Paz because they stimulate debate and make people think. 'What makes us happy is that we have revolutionized, but above all, reclaimed the streets as a political mural', Torrico said, 'which can be opposed to or supportive of a political cause'.

It appears to me that all these various groups share two key beliefs: the superiority of creative expression for stimulating change, and people’s right to have their voices heard on the streets of the city. What divides them is their definition of who the people of La Paz are. For Torrico, the streets are a manifestation of the right to freedom of speech, but for the street art collectives, for the independent graffiti artist and groups such as the Mujeres Creando, the political parties whose voices already permeate every nook and cranny of the country are invading the only platform open to those without the power and money to have their voices heard anywhere else. The streets are where democracy is at its purest.

The result is a city whose streets are resounding with silent shouting. In the Evo Morales era, there is an atmosphere of revolution: political revolution from the government and the anti-establishment groups, social and cultural revolution from the likes of the Mujeres Creando and the street artists. Scrawled all over El Alto is the phrase 'My city is changing.' Is it?