The Sound of the Jungle 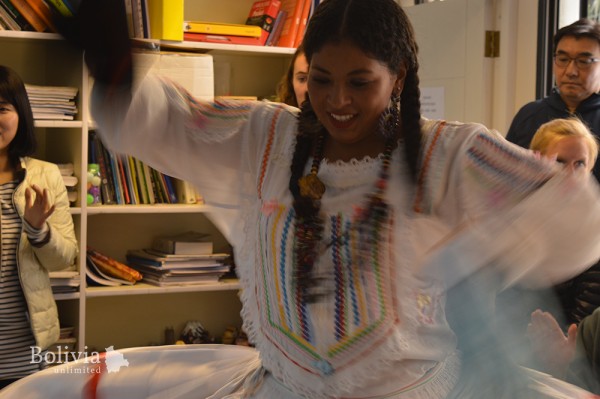 Hidden away in the tropical paradise of Coroico, in the Yungas region of Bolivia, is the Afro-Bolivian community of Tocaña. Amongst the folkloric celebrations found in this community, the culture of music and dance, particular to the Afro-Bolivians of Tocaña, is one of a kind.

Saya, based on drumming, singing and a hip-swaying sidestep, is an amalgamation of African and Bolivian traditions with distinct characteristics. The men play the drums, cuanchas and maracas alongside women who dance and sing about their African descent. Rhythmic and sensual, the women’s short steps and hip movements are magnetic, almost hypnotic. Dressed in white outfits, the women adorn their indigenous white skirts trimmed with multi-coloured belts and accessories. In saya tradition, the captain of the dancers wears a set of bells around each leg to lead the dancers, symbolising the chains and shackles once worn by their ancestors.

Preserved since the arrival of African slaves who were brought to Bolivia to labour in the mines, the saya rhythm has served as a tool to communicate the hardships faced by black people. Through song, they express their needs and desires. In spite of emancipation, in 1851, and the right to own land, granted by the agrarian reforms of 1952, Afro-Bolivians have long faced discrimination and been ignored by the Bolivian government. In a nation in which only two percent of nearly 11 million inhabitants are black, Afro-Bolivians are a forgotten minority.

‘We have always been discriminated against for the colour of our skin, and saya has always been used as an instrument to fight.’

‘Africans have always been seen as slaves,’ Nilo Vázquez Rey explains, who is president of a Afro-Bolivian saya ensemble. ‘We have always been discriminated against for the colour of our skin, and saya has always been used as an instrument to fight.’ Due to discrimination and racism against Afro-Bolivians, saya was forgotten about for some time, only to be revived in 1983 by a group of school students. Since then, it has reemerged as an instrument to be listened to.

‘Our main weapon has always been to create music, which we can use to achieve our goals,’ Vázquez continues. ‘Tocaña, for example, is now recognised as an Afro-Bolivian town, but before we had always been marginalised.’ Article 32 of the 2009 Bolivian Constitution, recognises Afro-Bolivians and their economic, social, political and cultural rights.

In spite of emancipation, in 1851, and the right to own land, granted by agrarian reforms of 1952, Afro-Bolivians have long faced discrimination in the country.

‘The principal idea of saya is to preserve our culture to ensure it is always alive and present so that our history doesn’t die,’ Vázquez says. ‘We have three children between the ages of six and eight who dance with us. There is no age limit. Saya is danced virtually from the mother’s womb.’ Passed down from generation to generation, saya has integrated a part of African culture into the Bolivian way of life.