The Sky Says It All 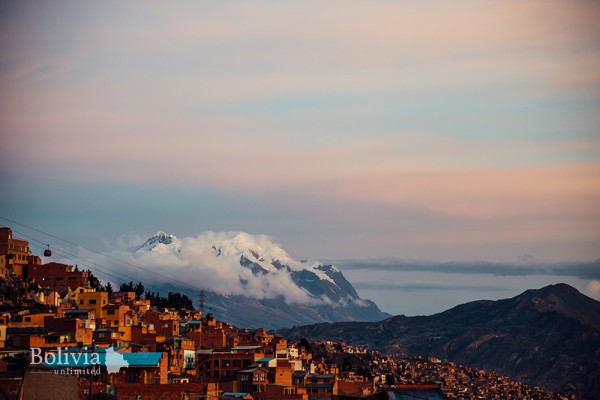 La Paz has been branded and given an iconic title to broadcast its delights to the world. The result: ‘The City of the Sky.’ It’s a collaboration of branding experts, Bolivian academics and paceños themselves. ‘The sky is a place where distinct things take place, special and even better things,’ says Jordi Torrents, branding expert and guest lecturer at the Catholic University of Bolivia. ‘The Sky’ has been used to evoke imagery and symbolism – combining La Paz’s indigenous culture, natural landscape and modern innovation.

When Torrents and other academics from the Catholic University of Bolivia embarked on this new encapsulation of the city, they soon realised that ‘there is no [collective]mental image for La Paz,’ says Torrents. ‘When you think of Sydney [Australia], the image of the Sydney Opera House comes to mind; Barcelona, the Sagrada Familia; Paris, the Eiffel Tower… The main objective of a brand for the city is to create this image for La Paz and transmit this image [to the world].’

The process involved 60 qualitative interviews with paceños representative of the city’s diverse strata, followed by a quantitative survey to corroborate the qualitative responses distributed to 200 paceños and alteños, as well as 200 Bolivians from other parts of the nation. Journalists from Asia, Europe and other parts of Latin America also provided insights about international audiences and their engagement with La Paz.

‘It is very important that the way in which we explain the city to the world is the same way the people of the city identify and feel represented,’ says Torrents, ‘So we have to make this match between what generates pride for the citizens of the city and the difference La Paz has in comparison to other cities… why people should visit La Paz.’

‘The City of the Sky’ is a ‘combination between the ancestral and innovative [aspects of the city] together with the mental image of the Illimani [mountain peak], ’says Torrents. It is a brand that tells the world that ‘La Paz is not only the Andes – it is a place of rich, profound, magnificent ancestry, as well as an innovative country capable of developing the world’s largest cable-car system as a means of everyday transport. To create acity at 3,600 metres of altitude you have to become very innovative; otherwise, you fail. ’Currently, three local publicity agencies (narrowed down from nine) are developing a logo and publicity campaign to accompany the city’s new brand. A winner will be chosen shortly.