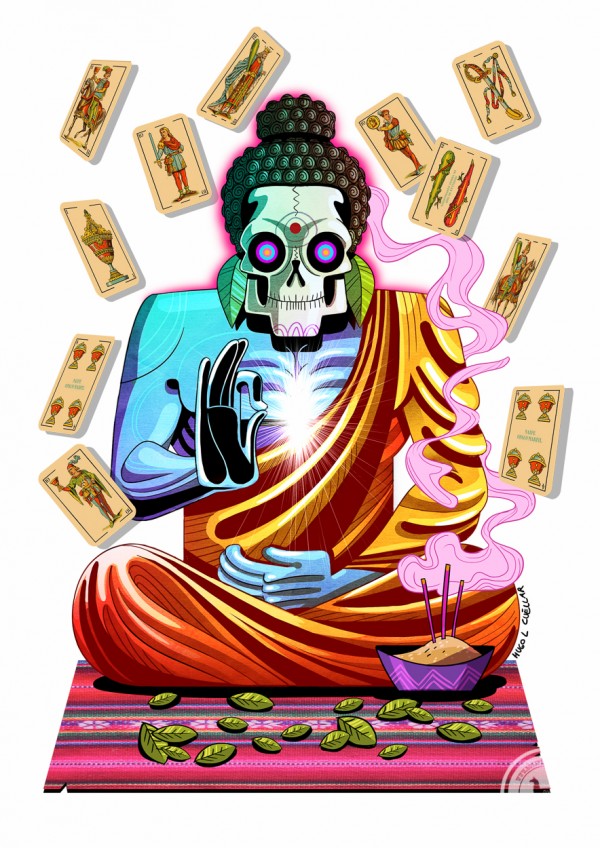 A pilgrimage to discover what lies within

Our quest to understand what the sixth sense means in Bolivia began with a series of visits to La Paz’s curanderos and yatiris, its (mis)fortune-tellers, identified by minuscule stools set beside them for passing customers to sit in. They are self-proclaimed windows into other worlds, conduits of a higher power. One yatiri proudly informed us, ‘I fell to Earth in a lightning bolt.’ These interpreters of cards or coca leaves profess to sense things that we, mere mortals, are unable to see or hear.

Our first encounter with these vessels of insight was underwhelming. Squeezed into a secluded nook off Sagarnaga, our curandero invited us to sit down either side of him. After expertly shuffling some battered Spanish baraja cards, he dealt them onto a mat, pointed sporadically, mumbled indiscernibly, and told us that all would be ‘bien, no más’.

With relief turning to cynicism, we walked away, convinced that the best – a feeling of contact with a higher power, an inexplicable insight from a complete stranger – was yet to come.

In total, we spoke to six yatiris. Fortunately, not all were as vague as the first. Unfortunately, though, we are currently coming to terms with the fact that we have been cursed, that mild illness is impending, that we have to watch our spending, and that the rest of our lives will be, at best, ‘fine’. But there are solutions: One yatiri helpfully pointed to a nearby ATM so that we could purchase a three-month cleanse (200 bolivianos) or, for just double the price, eternal purification.

The monetary incentive, in what is very much a business for these individuals, is irrefutable. At times, their readings came off as well-rehearsed sales pitches designed to make impressionable clients spend more money. There is certainly something to be said for these individuals as spiritual or emotional safety nets, however. Whether by reassuring customers that everything will be ‘fine’ or offering soul purifications, these yatiris generally granted visitors the opportunity to depart with a clear conscience.

‘I fell to Earth in a lightning bolt.’
— a yatiri

Admittedly, many of the readings did leave an impression, and were often eerily aligned with one another. Don Simón, in particular, reading coca leaves in his wooden shack set back from Sagarnaga, interpreted what he saw in ways that were, if not always correct, at least remarkable. The following day, a yatiri next to the cemetery produced a reading so similar that it it made us question our prejudgements.

In order to find out more, we attempted to visit a notorious love doctor in Sopocachi called Salvador. During seven-hour bonding rituals, he would invoke the powers of Tamara – a spookily well-preserved human skull – to intensify the love between his subjects. Four years ago, this self-proclaimed Cupid told Bolivian Express that he believes himself to be ‘a deeply spiritual person’, and that he ‘worked with the spirits in order to achieve union.’

Unfortunately, however, Salvador’s ability to channel his alleged sixth sense and communicate with the ethereal realm didn’t extend into the material world, as after our four separate and scheduled visits we eventually were met by rejection in the form of unanswered knocking on his door. Whether this was, in fact, Tamara warding away our journalistic demons remains unclear. We would suggest not.

Finally, mercifully, our journey took us to the Centro Zen, a Buddhist meditation centre on Calle Hermanos Manchego. We met with Juan Manuel Torrez, or Juma, as he is known. ‘I have always been following various spiritual currents in search of my home,’ Juma said. When he joined the centre, however, ‘something connected, I don’t know what, but I felt like I had done this before.’ Throughout our discussion, Juma had an aura of self-assured tranquility.

We were joined by two other companions, Alejandro and Marcela, who explained their perspectives on Zen meditation. ‘In Buddhism, there is no failure, there is simply abandonment,’ Alejandro said. Their congregation has ranged from politicians and scientists to students and artists, but many have fallen by the wayside. According to Alejandro, ‘It is difficult to maintain because human beings always aspire for something beyond, something different.’ Zen, all three explained, is not about looking outwards but about searching within yourself for inner peace.

They each adopt the posture of the Buddha, legs folded, backs arched, shoulders down, and chests puffed outwards like peacocking pigeons. Juma explains that, teamed with deep respiration, this pose allows them to engage both mind and body in order to ‘understand [themselves] on a far deeper level’, and to ‘overcome the difficult moments of life.’

Unfortunately, we have been cursed, mild illness is impending, we have to watch our spending, and the rest of our lives will be, at best, ‘fine’.

Our search for the sixth sense, perhaps, was the curse we were warned about. Whether or not this had anything to do with the alleged spell placed on one of us by a former lover, or because our subjects were particularly interested in cultivating that sense of aloofness, of mystery, that contributes to their aura of otherworldliness, we cannot be sure.

It wasn’t, arguably, the most sensible idea to task a pair of sceptics with this pilgrimage. The real curse, perhaps, was that we were looking in the wrong place all along. Our experience at the Centro Zen was far more illuminating than anything we actively sought out. Self-knowledge, Juma and his companions posit, is the path to better understanding others. Their sixth sense is not transcendent, not incandescent, but a sense of inner tranquility.